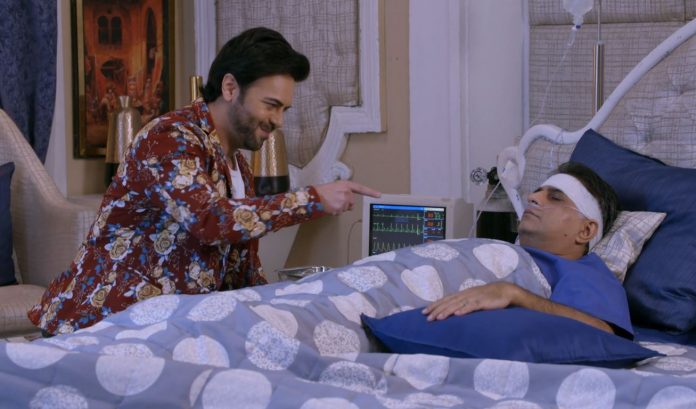 Kundali Bhagya 3rd March 2021 Written Update Prithvi provokes Mahesh Prithvi reacts on his own mistake. He defends saying he is really happy to see Shrishti after a long time, Shrishti is like Kritika’s sister, she is his sister-in-law now. Shrishti steps on his foot and teaches him a lesson. He tells that Shrishti will never change. She insults him. She tells Kritika that she is very happy for her.

Kareena asks her the reason for coming. Shrishti tells that Prithvi wanted her to decorate the mandap in his marriage. Prithvi calls her right. Preeta wants Sherlyn to stare at Mahira, instead her. She wonders where did Mahira go. Mahira keeps an eye on Karan. She plays a new game to get his sympathy. She asks Karan not to react on seeing Preeta worried because of Prithvi. She tells him that Prithvi has come home with his mom.

She wants Karan to just trust her, not Preeta. Bani asks Karan to dine with them. Preeta doesn’t want Karan to be with Mahira. Karan refuses to have dinner with Prithvi. Kareena and Rakhi speak to Prithvi’s mum about the marriage functions. Rakhi asks Preeta to explain Shrishti about the decorations. Prithvi tells Shrishti that she has to make the best decorations. Shrishti agrees for Kritika’s sake. Preeta tells Shrishti what Kritika is thinking about her. She can’t believe that Prithvi has brainwashed Kritika so soon.

Shrishti wants Preeta to stop Prithvi from spoiling their relations. She doesn’t understand what to do to stop the marriage. She adds that Prithvi is worse than Akshay. Shrishti tells that Prithvi is still with Sherlyn, she had just spotted them together. Preeta tells that no one believes them. She doesn’t want to tell anything without any proof. Shrishti alerts of Prithvi and Sherlyn’s plans. Preeta pities Kritika.

She regards Kritika as her sister. Preeta cries for Kritika’s future. Kareena asks Preeta for the sweet boxes to give it to Prithvi’s mom. She asks them not to spoil any function. She doesn’t want to spare them if anything goes wrong. Shrishti doesn’t know how can Kareena ruin Kritika’s future. Preeta tells that Kareena is a good mother, she doesn’t know Prithvi’s truth. Shrishti makes a leave. Prithvi gets a chance to meet comatose patient Mahesh. He gives the news that he is going to marry Kritika.

He asks for his property. Mahesh reacts on hearing the news. He pushes Prithvi in rage. Prithvi gets scared that Mahesh is getting conscious. He tells Kritika that he came to meet Mahesh. She notices Mahesh moving his hand. Prithvi tells that she is just imagining it. She adds that Mahesh reacted on hearing Prithvi’s magical voice. He asks Kritika to let Mahesh rest. He doesn’t want Mahesh to break out of coma. He fears that his truth will come out. Kritika requests Mahesh to come back to them. She loves him dearly.

Sarla and Janki arrive at the Luthra house to attend Kritika’s marriage functions. Sarla tells that she doesn’t want to work for this marriage contract. She hates Prithvi. Janki tells that they have to work even if they don’t want to. She slaps Prithvi for his crime to marry Preeta. Prithvi apologizes to her to keep his clean image. He accepts his mistake. He tells that Pawan wanted him to marry Preeta.

He asks Sarla to believe him, he is still innocent, he wasn’t at fault. Sarla doesn’t forgive him. He finds her a stubborn old woman. He knows how to convince Sarla. What will the Aroras do now? When will Rishabh arrive to team up with Karan and Aroras to stop the marriage? Do you like the interesting high voltage drama coming up? Comment below and keep reading for quick updates.

Reviewed Rating for Kundali Bhagya 3rd March 2021 Written Update Prithvi provokes Mahesh: 4/5 This rating is solely based on the opinion of the writer. You may post your own take on the show in the comment section below.