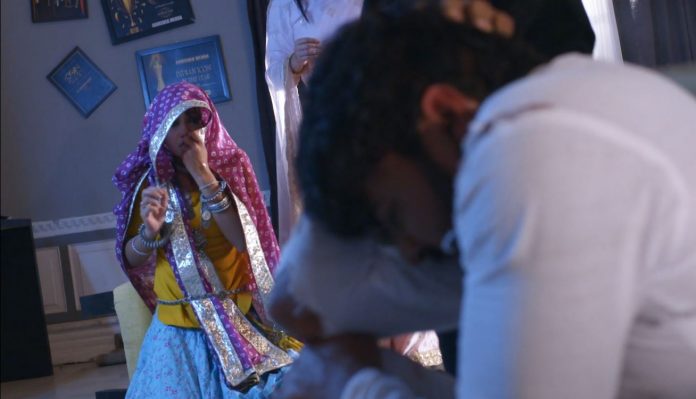 Aaliya asks Pragya if she is overhearing their conversation. She scolds Pragya. Pragya tells that she will leave the job and go. Tanu and Mitali stop her. Aaliya can’t bear anyone’s attitude. Mitali asks Pragya not to feel bad of Aaliya’s words. She wants Pragya to clean the house first. Pragya asks them about the kitchen. Aaliya asks Pragya to leave, since she can’t bear her attitude. Pragya makes an apology and tells that her language sounds rude. Mitali guides her about the way to the kitchen. She wants Pragya to begin the work.

Palak blurts out the truth about Ranbir’s secret plan to marry Prachi by taking Jai and her help. Prachi can’t believe that Ranbir was cheating her and planned the marriage. She gets angry that he didn’t care for her consent. Palak tells Prachi that Ranbir loves her a lot and he can die for her. She asks Prachi not to fight with Ranbir. Prachi wants to confront Ranbir. Pragya informs Sarita that she is going to meet Abhi. She acts to clean the house and reaches Abhi’s room. Sarita prays that Abhi and Pragya unite. Consequently, Pragya enters Abhi’s room to call him out.

He asks him to come to her and talk. Abhi attacks Pragya. He is seen after a long suspense buildup. Pragya tries to tell him that she is Pragya. He suffocates her. He acts mad which shocks her. Aaliya senses that Gayatri had gone to Abhi’s room and her life is in danger. She rushes to see what’s happening. Abhi hurts Pragya and bites her hand. Pragya is super shocked to see his miserable state. Aaliya reaches there to save the maid. She doesn’t know that Gayatri is Pragya. Aaliya tries to stop Abhi and beats him up to control.

Pragya asks her to stop beating him. She is shaken up seeing Abhi’s madness and Aaliya’s torture. Baljeet asks Gayatri to stay back and work in the house. Tai ji tells that Abhi is behaving mad, they should shift him to the mental asylum. Baljeet asks Pammi not to call Abhi mad. She knows that Abhi needs love, he just gets tortured by Aaliya and others. Tanu wants Aaliya to call the doctor fast and get Abhi under control. Pragya thinks how could Aaliya beat up Abhi so badly. Aaliya asks Abhi to listen to her else she will not leave her.

Mitali behaves as if Abhi has turned into a ghost. Tanu doesn’t seem to be scared of him. Abhi feels hurt. He cries in pain. He asks Tanu not to beat him. Tanu leaves before he reaches her. He asks them to give him some food. Aaliya doesn’t want the maid to leave.

Pammi tells that Baljeet had requested Gayatri to work in the house. Tanu tells that they can’t find a new caretaker every day. She reveals that servants will tell the world about Abhi. Mitali thinks they should call Pragya home. Tanu wants to stop Gayatri from leaving. Pragya is in tears recalling Abhi’s poor state. She doesn’t want to break down. She wants to leave from the house for a day so that the family doesn’t suspect her.

Reviewed Rating for Kumkum Bhagya 5th March 2021 Written Update Abhi shocker: 1/5 This rating is solely based on the opinion of the writer. You may post your own take on the show in the comment section below.