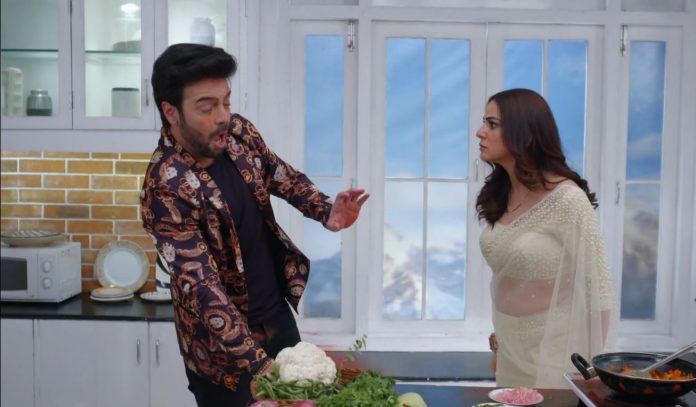 Kundali Bhagya 8th March 2021 Written Update Preeta bold step Preeta realizes that she had upset Kareena. Shrishti gets too upset after an argument with Kareena. She goes to Sameer and gets into a not so awkward moment with him. She asks him to support her in finding a proof against Prithvi so that they can stop Kritika’s marriage. He tells that Kareena will not spare him if Kritika’s life gets ruined. He asks her to let Kritika and Prithvi get married. She asks him if he is scared of Kareena.

He tells that he will not come in her sweet words. She tells him that she will go to Prithvi’s house to get an evidence against him. Kareena is angry that Shrishti didn’t help her in fixing the Toran. Prithvi thinks its a great chance to help out Kareena and win her heart. He goes to play the role of a good son-in-law. He helps out Kareena. He tells Kareena that Shrishti won’t know and Kareena will win the challenge. He lets the servants do the work. Kareena doesn’t get impressed. She doesn’t like Prithvi’s intention to cheat. He wants to keep an eye on Shrishti.

Preeta makes breakfast for Bani. Prithvi finds her alone. He flirts with her once again leaving her agitated. He tells her that he respects her, he loves her a lot, he wants her only. He asks her to give him what he wants. She calls Girish to send Prithvi away. She warns Prithvi against crossing his limits. She asks him to get lost with his nonsense. He asks Preeta why is she showering hatred on him. He likes her a lot. She asks him to have some shame.

He tells her that he even likes the insult served by her, since he just belongs to her. He tells that he likes her killer looks and attitude. He feels its his mistake that he had been careless and let Karan marry Preeta. He tells Preeta that he will give her all the love she deserves. He adds that Karan is more interested in Mahira than Preeta. He asks her to leave Karan and just come to him. Preeta angrily throws chilli powder on his face. He screams in pain. She tells him that she will not tolerate if he speaks a word against Karan.

She isn’t the old Preeta to tolerate his nonsense. He is still mad about Preeta. He feels more love for Preeta. Shrishti saves Kareena from falling down. Kareena counts her mistakes and scolds her badly in anger. Shrishti makes her realize that she favored her just now. Rakhi witnesses this and tells Kareena that Shrishti just saved her. She asks Kareena to thank Shrishti. Shrishti doesn’t want any thank you. Kareena feels Shrishti is ill-mannered.

Rakhi doesn’t drag the matter on seeing Prithvi there. Prithvi sympathizes with Kareena. He cheers her up by complimenting her. He speaks against Preeta. He tells that Preeta makes relations worse, she has already broken Rakhi and Kareena’s terms. He spits poison against Preeta. He thinks Kareena will easily come in his words. He feels that its wrong that Preeta is playing family politics to divide and rule. He tells that Preeta wants to ruin everyone.

Kareena is confused. He wants everyone to hate Preeta. Meanwhile, Sherlyn compliments Rishabh. She tells that she likes him sometimes. He knows that she doesn’t like him. She tells that she was thinking how did he get convinced for Kritika and Prithvi’s marriage. He taunts her about their marriage, which is just so unwanted. He feels that their marriage is a compromise, they have become a puppet by their fate. He tells that Kritika feels Prithvi is her hero who saved her life. He doesn’t think that he can do anything. He tells that they have to live with it. What will Sherlyn do now? Will the marriage happen or not? Keep reading. Leave your comments below.

Reviewed Rating for Kundali Bhagya 8th March 2021 Written Update Preeta bold step: 3/5 This rating is solely based on the opinion of the writer. You may post your own take on the show in the comment section below.