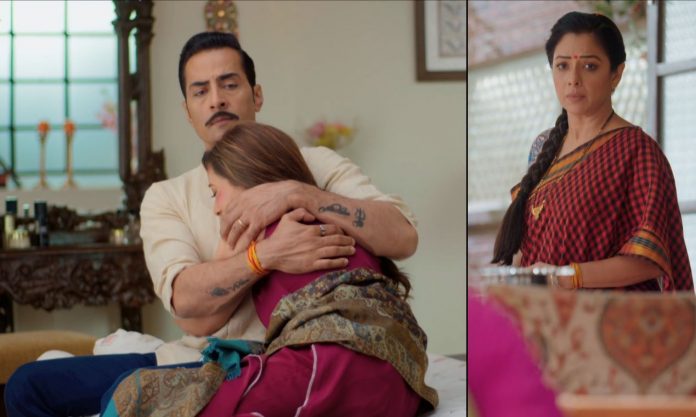 Anupama 8th March 2021 Update Kavya traumatic shock Vanraj doesn’t call Kavya to avoid her questions. He doesn’t want any more complications in his life because of Nandini. Kavya shouts for help when the stalker misbehaves with her. Vanraj charges his phone. He calls Kavya from the landline. He gets a shocking news from Kavya’s neighbor. Anupama asks Vanraj what had happened to Kavya. Vanraj runs in the urgency. Anupama doesn’t let him go alone. She is equally worried for Kavya.

She accompanies Vanraj. He doesn’t answer her anything. They reach Kavya’s house and find the neighbors outside her flat. They are hugely shocked to find Kavya molested. Vanraj and Anupama care for Kavya. Vanraj is shaken up by the incident. Anupama asks Kavya to tell them what had happened with her. Vanraj is scared to ask Kavya. He feels guilty that his absence led to this horrible thing. Paritosh and Kinjal worry for Kavya.

Paritosh switches on Vanraj’s phone. He accidentally reads Kavya’s messages. He learns that Kavya was being stalked, she was in deep trouble, maybe she got molested by someone. The family is shocked to learn this. Vanraj breaks Kavya’s silence. Kavya breaks down. She tells him that she had called him many times to seek his help. Kavya narrates the horrible incident. She tells that someone had been stalking her since few days. She reveals that the guy had molested her. Vanraj feels her pain. Anupama encourages Kavya.

Kavya tells that she couldn’t handle the pain and fainted down. Samar wants to inform Nandini. Kinjal advises him not to call Anirudh so soon. The Shahs are shocked to find Kavya entering the house with Vanraj and Anupama. Leela suspects Kavya’s intentions. Paritosh tells Hasmukh that Anirudh didn’t hurt Kavya, the guy was someone else. Vanraj wants to file a police complaint to get the molestor punished. He apologizes to Kavya.

Kavya tells that she will face the same insecurity once she is alone. He wants to accompany her home. She mentions that she had give the house to Anirudh to get a divorce. Samar wants to meet Nandini. Paritosh tells that Vanraj will be more worried if he gets Nandini home. Samar tells that he wants to get Nandini for Kavya’s sake. Paritosh doesn’t understand him. Kinjal asks Samar to wait for some time. They feel bad for Kavya. Kavya pleads to Vanraj to be with her. Vanraj encourages her that she had fought for her respect, she is really brave.

She tells that she can’t fight every day if she is strong. She adds that she is fed up hearing the people’s taunts. She wants Vanraj to marry her and give a name to their illegitimate relation. She tells that she doesn’t want to stay alone. Leela fears that the family will lose their peace. She suspects that Kavya is doing a drama to enter the house. Vanraj and Anupama permit to let Kavya stay in the house. Anupama finds hard, but lends help to console a traumatized Kavya. Is Kavya plotting a drama again this time? Comment below and keep reading.

Reviewed Rating for Anupama 8th March 2021 Update Kavya traumatic shock: 5/5 This rating is solely based on the opinion of the writer. You may post your own take on the show in the comment section below.