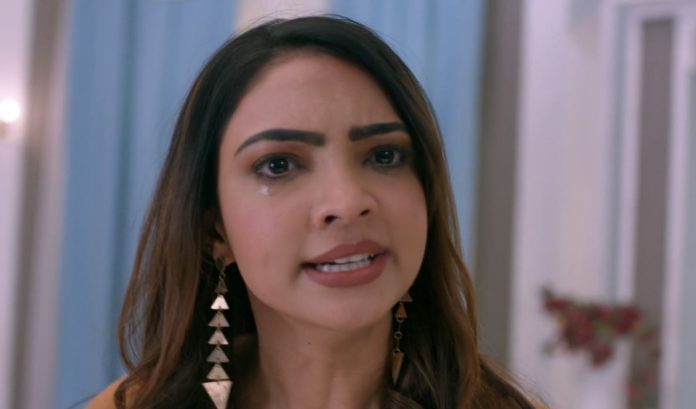 Kumkum Bhagya 9th March 2021 Written Update Rhea faces shock Pragya enquires about Abhi’s health from the doctor. She asks the doctor if there is any cure. Doctor tells that he will speak to his seniors, there will be a solution. He finds her thinking positive. He suggests that Abhi shouldn’t get any shock, she should take care of Abhi in a good way, by winning his confidence. Tanu bonds with Rhea. She tells that she knows Rhea loves Ranbir. She wants Rhea to marry Ranbir, his love will help her in bad times. Rhea is thankful to her. Aaliya knew that Rhea will like Tanu.

She introduces Tanu to Vikram and Pallavi. Mitali is glad to see Pragya/Gayatri back. She asks Gayatri ot to leave the job. She really needs a caretaker for Abhi. Pragya tells that she will not leave the job, she is a fighter. Mitali welcomes her. Aaliya tells Pallavi that Tanu is her best friend. They tell Vikram about Abhi’s new caretaker Gayatri. Ranbir collides with Pragya, but doesn’t identify her. Rhea is happy to see Ranbir. Pragya sees Rhea after a long time. She gets emotional.

Tanu tells that Rhea is stressed about Abhi’s condition, she has suggested Rhea’s marriage to make her happy. Aaliya decides Ranbir and Rhea’s engagement and marriage. Pallavi is happy with the proposal. Ranbir is shaken up. Aryan knows Ranbir is mad about Prachi. Pragya cries that Prachi will lose her love. Aaliya tells that even Abhi wanted this marriage to happen. She convinces Vikram for it. Pragya goes to see Abhi. Ranbir is speechless.

He stops them from deciding about his life. He tells them that he will not marry Rhea, he will decide for his life. He refuses for the engagement. Rhea goes mad on her insult. She can’t tolerate Ranbir’s rejection. Pragya can’t think of Prachi and Rhea’s happiness at the same time. She doesn’t know that Ranbir refused for the marriage. She cries on seeing Abhi. Mitali gets food for Abhi. She asks Gayatri to feed the food and medicines to Abhi. Pragya tells that she will not take orders. Ranbir wants his marriage to understand him.

Pallavi commands him to marry Rhea. Ranbir tells that he didn’t know the truth before. He raises an objection. He tells her that he agreed to marry Rhea for Pallavi’s sake, but he heard the doctor talking to her that she has no heart problem, she is perfectly fine, she was hiding her actual condition from him. He confronts her for the drama. He tells her that she had lied to him, he caught her lie and regrets for it. He declares that he will not marry Rhea.

Pallavi apologizes to Vikram. She tells that she just wanted Ranbir and Rhea to marry. She wants Vikram to support her for keeping Abhi’s wish. She decides to force Ranbir for marriage. Pragya gets angered on hearing about Abhi’s madness. She doesn’t want Mitali to doubt her. She lies to Mitali. Ranbir calls Prachi and panics. Aryan asks him to calm down. Ranbir tells him that he doesn’t love Rhea, he loves Prachi. He feels helpless that his family isn’t helping him. He wants at least Prachi to understand him and support him. Prachi acts unaffected and unconcerned, leaving him more frustrated. He wants Prachi to break her silence and admit her feelings.

He wishes Prachi realizes the intensity of his love. Prachi takes his call. He makes an apology. He asks her if she isn’t angry on him. He informs her about his family’s wish to get him engaged to Rhea. He is much angry. He wishes that he married Prachi that day.

Moreover, Rhea comes to meet Ranbir. Ranbir requests Prachi to marry him, he swears to keep her happy. Rhea wants Ranbir to marry him, when Prachi refused to him. Rhea learns that Ranbir was planning to marry Prachi. Pragya meets Abhi and befriends him. He begs her not to beat him. She tells that she isn’t his enemy, she is his friend who will never hurt him. Abhi accepts Pragya as his new friend. Will Pragya help Abhi recover? Will her truth stay hidden from Aaliya? Keep reading. Leave your comments below.

Reviewed Rating for Kumkum Bhagya 9th March 2021 Written Update Rhea shocked: 5/5 This rating is solely based on the opinion of the writer. You may post your own take on the show in the comment section below.