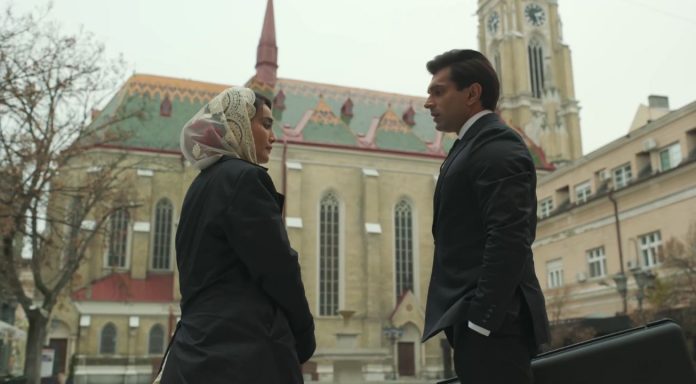 Qubool Hai 2.0 Episode 1 Stars Collide Written Update In Serbia, Asad and Zoya cross paths by the destiny’s plan. Asad heads for his work. Zoya decks up for her marriage with her childhood friend, whom she doesn’t love at all. She awaits her mother. She doesn’t want to marry the guy, who has low IQ. She changes her mind in the last moment. She tells that she will never love her husband. She had taken much time to make this decision. She feels that she should give a chance to her father and meet him once. Zoya’s mother fails to convince her for the marriage.

Zoya finds herself in a dilemma on her marriage day. She recalls that she flew down from London for the big day. Asad speaks to his family. Zoya has fond memories of her father. She wants to meet him. She learns that the groom Salman is awaiting her. Asad prepares to present his shooting skills, representing his country in the competition. Asad feels the odd presence of his ex, who broke up with him.

Fatima is pleased to get a perfect Bahu like Zoya. Asad competes with Martin. Zoya refuses for the marriage. She doesn’t want to marry the guy for whom she isn’t important at all. Asad takes the lead in the championship. Zoya doesn’t answer anyone. She runs away from the marriage. Fatima criticizes her for not being suitable for Salman. Asad doesn’t give the winning speech. He hands over the trophy to his coach and asks him to handle the press. Zoya plans to leave at the same time, when Asad makes his way to the hotel.

Moreover, Fatima learns that Zoya has run away. She is thankful that Zoya left the jewellery. Salman gets heartbroken. Asad makes an urgent departure when he finds getting too affected by his ex. He drives to the airport. Zoya comes in front of his car. Asad doesn’t hit her. He offers help. She accuses him for his attempt to kill her. He minds her to watch it. He wants her to talk by remembering her manners.

He tells that he can drop her to her marriage. She clears that its not her marriage. Zoya gets worried to find her family chasing her. She takes Asad’s help. She tells that she has changed her mind. She then reveals about thegoons following her. She wants him to speed up the car like he was speeding when he was going to kill her. She commands him to stop talking and just focus.

The car chase scene gets interesting when Zoya learns Asad’s real driving skills. She asks Asad to be careful. Asad shoots at the goons’ car to get rid of them for once and all. He drops Zoya to her destination. She finds it quite an adventure. She thanks him for the help. Asad and Zoya are being watched by the chief of security council.

Reviewed Rating for Qubool Hai 2.0 Episode 1 Stars Collide Written Update: 5/5 This rating is solely based on the opinion of the writer. You may post your own take on the show in the comment section below.