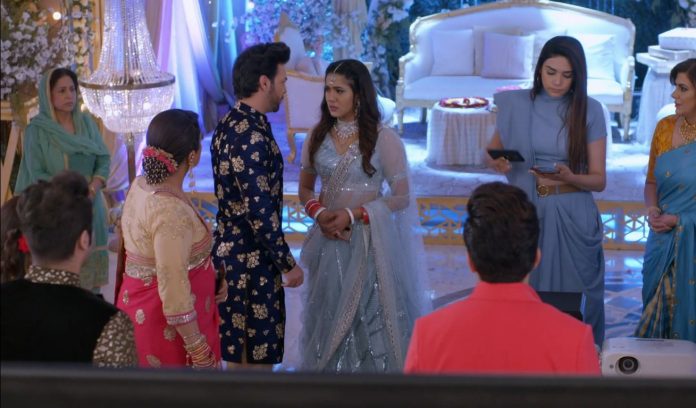 Kundali Bhagya 18th March 2021 Written Update Prithvi ends Prithvi tries hard to prove his innocence. Shrishti counters his plans. Bani tells Prithvi that she trusts him, but what’s the reason that he kept the picture safe. Prithvi is thankful that Bani trusts him. He tells that he knows who had entered his house, he didn’t know he will face humiliation and get explaining his innocence to Kritika.

He asks Kritika to postpone the marriage if she wants. Kritika tells that she also trusts him. She adds that she couldn’t know him well. Bani tells that they will keep the engagement now. Preeta stops them. She asks them to ask Prithvi for a proof. She tells that they can’t believe him without any proof, he maybe lying. Prithvi tells that the story is true. She asks him to call his college friend and prove it.

Sarla tells them that Prithvi’s wedding picture isn’t a little evidence against him, they shall know the back story of the picture. Rishabh convinces Kritika to know the truth from Prithvi. Preeta tells that they will talk to his friend right away. Kritika asks Prithvi about his friend’s name. Sameer asks Prithvi not to lie now. Prithvi tells that his friend has boarded a flight, he may not answer.

Everyone asks him to call his friend. Prithvi tells Kritika that she knows his friend, Shubham, he had a flight to catch. He calls Shubham, hoping that he won’t answer the call. Shubham answers the call. Prithvi asks Shubham did he board his flight. Shubham tells that he missed the flight. He angrily disconnects the call. Prithvi asks them to believe him. Preeta tells Prithvi that he has to proof that he had sat in the mandap to help his friend. He tells Preeta that he can’t disturb his friend at this time.

Preeta asks them not to give their phone to Prithvi, else Prithviwill make Shubham lie as well. Sameer collects everyone’s phone. Shrishti requests Kritika to keep an eye on Sherlyn. Preeta asks Kareena to not let Prithvi go anywhere. Kritika asks Sherlyn to be with her. Rakhi tells that Kritika is emotionally disturbed, Sherlyn should be with her. Preeta, Karan and Shrishti go to Shubham’s house. Karan tells that everyone knows that Prithvi is fraud.

Shrishti shares her findings that Prithvi got married many years ago. Preeta tells that they had never seen his wife. Karan tells them that they will find his wife later. Shrishti knows that everyone will keep an eye on Sherlyn and Prithvi. She doesn’t want the family to see Mahira locked up in the cupboard. Prithvi tells Kareena that he is already married to Kritika. Kareena doesn’t accept the mass marriage. Ramona meets them and supports Kareena against Prithvi. Sameer is shocked to see Mahira locked in the cupboard.

He knows that Shrishti has done it. He wishes that Mahira doesn’t get conscious. Ramona wants to meet Mahira. Kareena tells that Preeta had locked their phones so that Prithvi doesn’t pass any information to Shubham. Ramona doesn’t find Mahira. She threatens the Luthras about the police. Rakhi gets worried. Karan and Preeta meet Shubham. They ask him to tell them Prithvi’s truth. Will Shubham tell the truth this time or lie in Prithvi’s favor? Do you know this will be the end of Prithvi’s chapter? Comment your views and keep reading.

Reviewed Rating for Kundali Bhagya 18th March 2021 Written Update Prithvi ends: 5/5 This rating is solely based on the opinion of the writer. You may post your own take on the show in the comment section below.