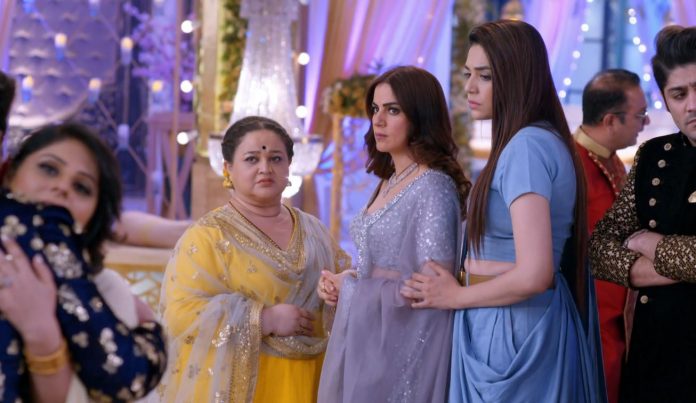 Kundali Bhagya 19th March 2021 Written Update Game changes Ramona and Kareena tell Prithvi that the reality will come out soon, once his friend Shubham comes. Kareena asks Ramona to go and meet Mahira. Prithvi wants Sherlyn to do something and stop Shubham from saying his truth. He wishes that he didn’t punch Shubham’s face. Ramona meets Kritika and gives her best wishes. She tells that its happening again, Akshay left her in the mandap, while Prithvi is already married.

She hurts Kritika and tells that she was feeling sad for her. Rakhi reminds her that she should not say anything wrong to Kritika. Ramona asks Rakhi to behave well with her. Rakhi asks her to mind her manners. Ramona tells that she has come to meet Mahira. Sherlyn tells that she didn’t see Mahira since a long time. She thinks to take this excuse and go out to help Prithvi. She wants to call Shubham from Ramona’s phone.

Kritika tells Sherlyn that she can’t let her go away, as Shrishti advised her. She asks Sherlyn to just stay with her. Rakhi also wants Sherlyn to stay with Kritika when she is emotionally disturbed. Ramona threatens to call the police if she doesn’t find Mahira. Sherlyn wishes that Shubham isn’t at his house. Preeta, Karan and Shrishti get to meet Shubham. They tell Shubham that they have come to take him along.

They question about his wife. Shubham tells that he isn’t married. Karan asks him about Prithvi. Shubham tells them that he knows Prithvi is a creep, he has ruined many lives. Karan tells that its Prithvi’s engagement today. They ask Shubham to come along and help them in bringing out Prithvi’s truth. Shubham agrees to go with them. He goes to get his wallet. Karan is glad that he has agreed to give his statement against Prithvi. Kritika waits for Karan. Prithvi is super tensed when Karan gets Shubham home.

Karan tells them that Shubham is Prithvi’s friend, who will answer them the truth. Preeta and Shrishti ask Prithvi to tell them if Shubham is the same friend who was marrying his lover secretly. Karan tells Shubham that Prithvi has told them about his marriage. He shows his the picture. Shubham tells that Prithvi is sitting in the mandap as seen in the picture. Preeta asks Shubham what’s the truth. She tells Kareena that Shubham isn’t married. Karan believes Preeta. Shubham changes his words shockingly, as very expected in the track.

Shubham tells them that Prithvi really helped him and sat in the mandap to save his life. He reveals that he got divorced some time back. He adds that he is emotionally disturbed. Prithvi thanks Shubham for the help. He fails Preeta’s plan yet again. Karan knows that Shubham has cleanly lied. Prithvi reprimands Preeta and Shrishti for wishing his bad and proving him wrong. He tells Shrishti that the entire family insulted him and defamed him, but he didn’t lose his patience. He adds that he knows the truth.

He wants Kritika to decide if she will marry him. He wins in fooling the entire family. He tells Kritika that he will accept her decision. Kritika decides to get engaged and also marry him. Bani tells them that they will start the engagement rituals. Karan turns upset. He still believes that Prithvi is wrong. Shrishti tells Sherlyn that she knows she is Prithvi’s wife. Sherlyn argues with her. Sadly, Kritika and Prithvi get engaged. Kareena also gives up in front of Prithvi’s stories. The family changes their side and appears happy for the sake of Kritika’s happiness.

Prithvi congratulates Kritika, who is still upset with the series of events. She tells that she didn’t like the fact that he still kept the picture with him. Prithvi gets super happy that he got saved yet again. Sarla and Janki take a leave. Sherlyn and Prithvi meet secretly and get happy. Prithvi tells her that he didn’t plan anything, he has won, its time to celebrate. Prithvi and Sherlyn celebrate with Mahira. He tells that the universe had planned his victory, its really a miracle that Shubham didn’t reveal anything about him. Mahira tells him that it is actually her hardwork, she had called Shubham and made him change his statement.

Prithvi laughs at her first. He tells that he didn’t see her anywhere. Mahira tells him that Shrishti had locked her in the cupboard. He s grateful to her if he really helped her. Mahira adds that she had heard their conversation and understood that they are in a big problem, then she went out of the window, she met Shubham at his house, she entered his house and kept a letter for him in his wallet, which made him lie to Luthras. She adds that she had bribed Shubham to lie about Prithvi’s marriage. Prithvi and Sherlyn get glad to know Mahira’s plans. Do you like the point Zero drama in the show? Comment your views and keep reading.

Reviewed Rating for Kundali Bhagya 19th March 2021 Written Update Game changes: 1/5 Same looped drama This rating is solely based on the opinion of the writer. You may post your own take on the show in the comment section below.