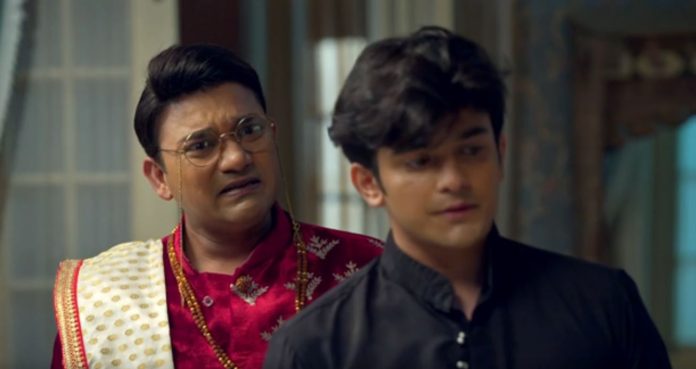 Barrister Babu 24th March 2021 Full Update Anirudh terrible act Bondita is shattered with Anirudh’s shocking deceive. She can’t believe that he spoke big things and went against his own promise. She wants to confront him once. She requests Trilochan to get Anirudh to her for a confrontation. Trilochan reprimands Anirudh for breaking Bondita’s heart. He tells Anirudh that Bondita is crying a lot since morning, she is wanting to see him once.

He adds that Anirudh was her Guru, her friend and her husband, but now he has become her enemy. He asks Anirudh if he has no courage to face Bondita. Anirudh doesn’t want to explain anything to Bondita. He asks Trilochan to accept the truth, even Bondita has to understand and accept the bitter truth. He hides his tears and sorrow. Trilochan asks him what had happened that he wants to break the relation. Anirudh doesn’t want to talk about Bondita. He madly yells at Trilochan. He shuts himself in a dark room. Trilochan fails to explain his mistake.

He tells that Anirudh has fallen in his sight for being a liar. Bondita and Anirudh are in same sorrow. She awaits Anirudh. She doesn’t sleep. She wants her answers. Anirudh tells that he is doing such a thing to bring Bondita on the path of prosperity. He wants Bondita to become a good person, an inspiration for everyone. He is ready to bear the punishment. He slaps himself burning in the fire of guilt. Manorama finds Anirudh crying. She tries to console him. Trilochan finds Anirudh with Manorama. He loses all the hopes that Anirudh will do justice with Bondita.

Manorama wants Anirudh to tell the truth to Bondita. She tells that he has to answer Bondita. He refuses to reveal about his fake marriage with Manorama. He wants to give her all the answers at the right time. He is in equal pain like Bondita. He feels so helpless. He tells that he has to give such reply to Bondita that breaks all her hopes and dreams. He wants to hurt Bondita intentionally. Manorama tells that he is hurting himself as well. She can see him in pain. She feels sorry for him. She asks Anirudh to keep his courage and tell the truth to Bondita.

She wants him to try at least once. Anirudh tells that he knows very well that Bondita needs to move on to get a good future. He doesn’t find any other way out. He madly wants Bondita to become a barrister and do good for the society. He has intentions to shape Bondita’s future. He shares the reason with Manorama. He tells that he will scold Bondita and break her heart for the sake of her bright future. He feels guilty that she has fallen in love with him, without living her young life. He decides to push her towards a bright future. Bondita looks for Anirudh. She meets Anirudh to seek his answers. She wants to know why did he cheat her. He is afraid to answer her. He refuses for a talk, breaking her heart further.

Reviewed Rating for Barrister Babu 24th March 2021 Full Update Anirudh terrible act: 4/5 This rating is solely based on the opinion of the writer. You may post your own take on the show in the comment section below.