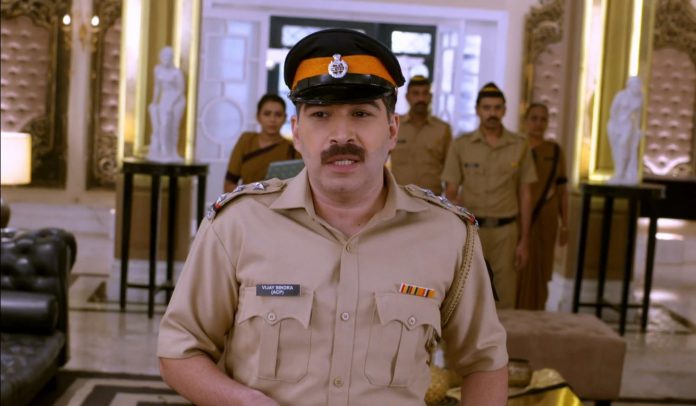 Kundali Bhagya 29th March 2021 Update Akshay murdered Akshay gets killed. ACP Vijay Bindra comes to the house to interrogate Luthra family. He informs them about Akshay’s death. He tells them that someone from the Luthra family would have killed Akshay. The family defends themselves, since they aren’t criminals to kill someone and stay relaxed in the house without confiding it to anyone. The family tells ACP that they have nothing to do with Akshay, he had left from their lives long time back after breaking up with Kritika.

ACP suspects Kritika or her loved ones to have killed Akshay to take revenge on him. The family tells that Kritika has moved on with Prithvi, her husband, she has no connection in tact with Akshay. Kritika is super tensed that Akshay’s blackmailing truth will come out. She doesn’t want Prithvi to know about her intimacy pictures with Akshay.

She worries for her current relation. Prithvi is also tensed since his meeting with Akshay, his evil intentions will get known to the police. He doesn’t want the police to expose his truth. He fears that he will lose the entire game if he is proved wrong in front of Luthra family. Karan and Preeta also have a reason to worry. They didn’t know that their meetings with Akshay will make them face the murder accusation. The four of them get into tension when the ACP questions them. Karan had met Akshay and bashed him up when he learnt about Akshay’s crime.

He can’t see Akshay ruining Kritika’s name and respect. Preeta too met Akshay to save Kritika’s respect. Akshay gets mysteriously killed by one of his enemies. It remains a suspense to find out who has killed Akshay and why. The murder blame revolves in the Luthra family. Prithvi admits to Sherlyn that he met Akshay, but didn’t kill him, he just slapped Akshay. He adds that he paid the money to Akshay and poked his nose into Kritika’s matter to become a hero on Sherlyn’s command. He tells that it was her flop plan that has put him into grave trouble. Sherlyn knows that Prithvi can kill anyone who comes in his way. She thinks he has really killed Akshay.

She asks him to admit the crime in front of her so that she can help him. Mahira recalls that she had seen Karan with blood on his hands. Karan had revealed to her that he bashed up someone who spoke against his sister Kritika. Mahira thinks Karan killed Akshay in rage. She shares the matter with Ramona. Ramona also thinks Karan is the murderer. Preeta wonders if Akshay died by the heavy blow on his head, which she made to get saved from his dirty intentions. She left Akshay alive. Who has killed Akshay? Who is the new villain in the show? Guess the mysterious killer? Comment below and keep reading.

Reviewed Rating for Kundali Bhagya 29th March 2021 Update Akshay murdered: 3/5 This rating is solely based on the opinion of the writer. You may post your own take on the show in the comment section below.