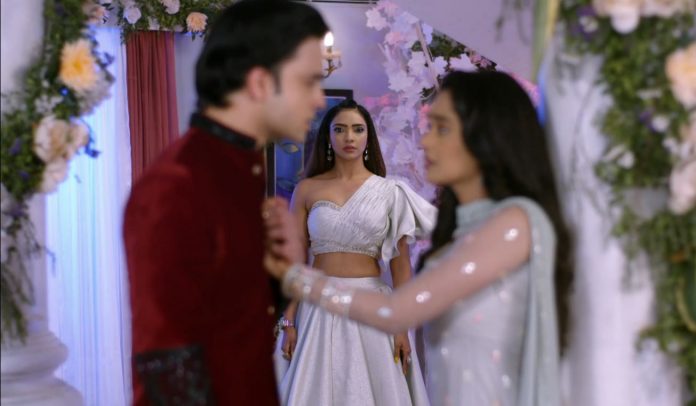 Kumkum Bhagya 30th March 2021 Written Update Rhea in shock Ranbir looks for Abhi. Rhea tells him that she didn’t see Abhi. He hopes Abhi is okay. She is thankful to him. She tells that Abhi will feel more proud of him when he gets fine. She likes his concern for Abhi. He asks her to be sensitive about Abhi. She tells that she will get his good qualities once they get married. She is sorry that she isn’t helping Abhi. He asks her to be concerned for her dad. Mitali asks him to come for the engagement. Rhea loves Abhi a lot. She cries for him.

Prachi wants Shahana to come with her. She doesn’t want Shahana to know that Pragya is working as a servant in the house for Abhi’s sake. She comes across Ranbir when she was trying to avoid him. They get into a special moment. She tells him that she didn’t come there for his sake. She wants him to get some clarity in life. He tells her that its his misunderstanding that he loves her. He wants her to say the truth. She is caught up in the web of lies.

He wants her to confess her love. Prachi refuses to him. She tells him that there is no ring on her hand, because they have no relation between them. Abhi meets Prachi. She hugs him and sheds tears seeing his kiddish state. Abhi asks them to exchange rings. Abhi tells that he doesn’t want any ring. He asks Ranbir to make Prachi wear the ring. Prachi cries a lot seeing his dad’s state. Ranbir also obeys Abhi out of respect. Prachi too gives her hand, while watching her dad’s mental state. Ranbir and Prachi get into an engagement mode.

Ranbir asks Prachi to return the ring, which she doesn’t deserve. Pragya informs Sarita that she is with Abhi. She is worried for Prachi’s love. Shahana waits to talk to Ranbir about Prachi. Aryan is worried. He prays for Ranbir’s happiness. Pragya finds Abhi drinking. She reaches him to be his aide. She tries hard to keep joy in his life. Abhi asks her to become his friend. Pragya accepts his friendship. She tells him that she will teach him to make paper planes. Abhi meets Rhea. He apologizes. Rhea learns about Abhi’s new friend Gayatri.

She is happy for him. He tells her about Prachi, who is with Ranbir. She gets upset knowing Prachi is in the party. She decides to not spare Prachi. Ranbir wants Prachi to admit the truth. Rhea witnesses their moment. She admits that she is the unluckiest girl in the world, she hates her mother Pragya. Pragya gets too upset on hearing Rhea’s hatred again. Moreover, Abhi proposes Pragya aka Gayatri for marriage. What new twists will come now? Keep reading.

Reviewed Rating for Kumkum Bhagya 30th March 2021 Written Update Rhea in shock: 3/5 This rating is solely based on the opinion of the writer. You may post your own take on the show in the comment section below.