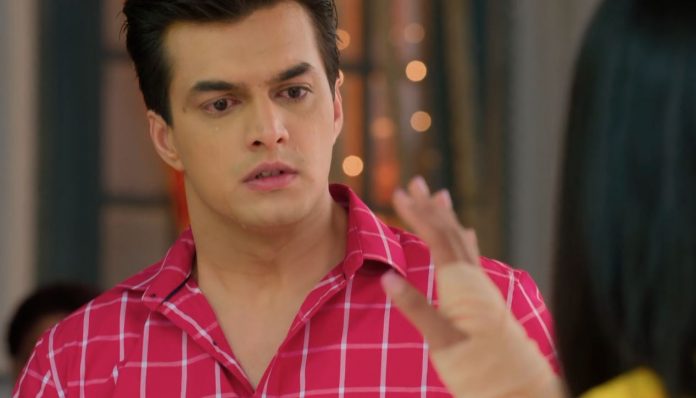 YRKKH Upcoming Kartik proposes Sirat Wedding Spoiler Kartik defends Sirat when she tries to step inside the house to meet Kairav. Manish fails Sirat’s attempt. He tells her that she should remember her place. He asks her to go back to the outhouse. Kartik tells him that Sirat has come to meet Kairav. Kartik wants her to get an entry in the Goenka mansion. He tells that she has saved Kairav’s life twice, she deserves to meet Kairav.

Manish tells that Kartik has done many favors on Sirat till now. He asks Kartik to just settle the scores and let Sirat go. He doesn’t want Kartik to involve Sirat in their family. Kartik tells Manish that Sirat is like family for him, he owes a lot to her. Manish asks him if his relation with Sirat is important than the family. He doesn’t want Kartik to get mad in his goodness and bring shame for the family by keeping terms with a girl like Sirat. Kartik keeps Sirat’s respect.

Manish asks Kartik not to come into Sirat’s trap, she is taking an advantage of her looks like Naira. He tells Kartik that Sirat has greed for money. He doesn’t trust Sirat at all. He finally tells Kartik to leave Sirat and focus on Rhea, his would be life partner. Kartik is much shocked when it gets revealed that Manish has fixed his relation with Rhea. He doesn’t want to marry Rhea. He tells Manish that Rhea doesn’t even exist for her.

Kartik clears Manish’s misunderstanding that he never agreed for the marriage. Manish tells that he had overheard Kartik and Akhilesh’s conversation. He adds that he had taken Kartik’s consent. Kartik declares that he will not marry Rhea. Manish provokes Kartik to tell if he has a relation with Sirat. Kartik boasts of his friendship with Sirat. He is grateful to her that she has been a savior for Kairav. He tells Manish that he has a relation of friendship with Sirat. Manish wants to know if Kartik can give a name to their relation. He tells that he can’t answer the society if they come with taunts for his son. He asks Kartik if he would marry Sirat.

Kartik admits that he would marry Sirat, who is really a good person for his children’s care. He sees a good mother in Sirat for Kairav and Akshara. He tells Manish that he will marry Sirat to keep her home. Sirat didn’t expect Kartik to decide from her side. She gets much upset with him. She goes away crying and feels hurt. Maudi is glad to know about Kartik’s proposal. She wants Sirat to accept it. Manish tells Kartik that he can never marry Sirat.

Kartik realizes that he has said that in anger, he can never hurt Naira by bringing someone else in his life. Dadi eases out his problem. He tells that he has cheated Naira by proposing Sirat. Dadi tells that even Naira would want him to move on in his life, Sirat fits her place well as the children’s mother. She asks Kartik to marry Sirat for the sake of his children. What will Kartik and Sirat decide? Comment your views on the coming marriage track. Keep reading.

Reviewed Rating for YRKKH Upcoming Kartik proposes Sirat Wedding Spoiler: 5/5 This rating is solely based on the opinion of the writer. You may post your own take on the show in the comment section below.