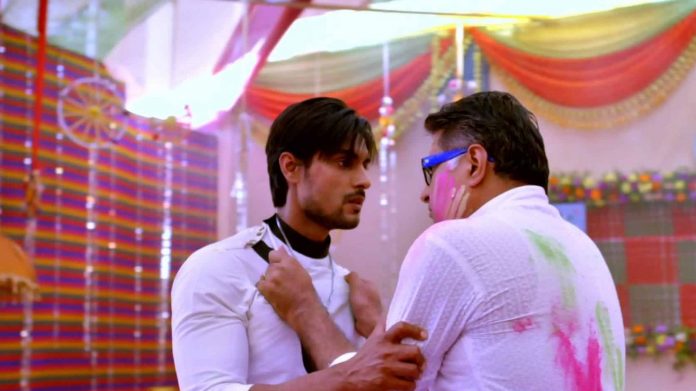 Kundali Bhagya 6th April 2021 Written Update Shocking boom Mahesh recollects the past enmity with Pawan. Pawan, being a sharp guy doesn’t remember meeting Mahesh in the past. Mahesh catches hold of Pawan. He tells that he has identified him. Pawan then strikes that Mahesh is actually Rishabh’s dad. Mahesh tells that he has understood Prithvi’s truth by now. He tells that he didn’t know the truth before. He is glad that he didn’t tell Prithvi, Sherlyn and Mahira’s truth by now, since he will tell the family the complete truth.

Pawan acts sweet. He tell that he isn’t any enemy, but his well-wisher. Mahesh tells that he knows the truth of Pawan and Prithvi. He realizes Prithvi’s evil intentions. He tells that he will tell the truth to the entire family. Pawan decides to kill Mahesh. He turns evil and applies colour on his face. Mahira wonders why is Pawan going after Mahesh. She wants to inform Sherlyn about Pawan’s arrival. Sherlyn pours the kerosene in the entire house.

She tells that she will not let the Luthras win, if Prithvi and she don’t win. Mahira stops her from burning the house. Sherlyn tells Mahira that Prithvi is going to reveal the truth. Mahira asks her to listen once. Sherlyn is too scared. Mahira asks Sherlyn not to get scared, everything is under control. She reveals that Pawan has come home. Sherlyn asks her not to take Pawan’s name in Luthras house.

Mahira tells her that Pawan has already met Mahesh, he is handling Mahesh. Sherlyn is terrified. She tells that Pawan will not spare Mahesh’s life. She feels Mahesh is really ill-fated, he will die this time. She adds that Prithvi and Mahesh have the enmity because of Pawan. She can’t tell Pawan’s secret to Mahira. She adds that Pawan is dangerous, he will ruin everyone on knowing that Prithvi is harmed. She wants to handle Prithvi. She is relieved that they are safe now. Mahira tells that Pawan may fail.

Sherlyn tells that the backup plan is to burn the Luthra house. Prithvi tells that he will take revenge and make them pay a big price for hurting his brother. Preeta and Karan try to get a meaning out of the broken statements. Sherlyn and Mahira try to distract them. Sherlyn tells them that Mahesh is calling everyone to talk something urgent. Shrishti makes Sherlyn tensed saying that Mahesh is going to reveal his enemy’s truth.

Sherlyn takes a chance and injects Prithvi to get him to senses. Prithvi misunderstands her and reacts. Sherlyn asks him to shut up. Mahesh hopes that Pawan stopped Mahesh by now. Mahesh reaches the family before Pawan harms him. He is tensed to reveal Pawan’s truth. Pawan wants to save his secret from coming out. Mahesh tells the family about Pawan and the secret of the past. He gets too stressed. He wants the family to just let him say. Mahesh reveals that Rishabh was busy in the business, that year someone tried to kill him.

Sherlyn watches Mahesh telling him the truth. Prithvi gets to senses. He doesn’t remember anything. He is happy that he won the competition. He checks the video recording in his phone. He learns that Preeta was trying to make him confess the truth. He feels Sherlyn truly loves him. He doesn’t want the truth to come out. He receives Pawan’s message. Pawan contacts him. He looks for Prithvi. Suresh asks Mahesh about the enemy.

Mahesh tells that Pawan was following him. Prithvi is shocked to see Mahesh with the family. He wonders when did he come out of coma. Mahesh fails to explain anything. He sees Prithvi in the house and is shell shocked. Pawan chases Mahesh with the poisoned weapon. Pawan and Prithvi promise to make it Mahesh’s last day. Will Mahesh really die this time or slip into coma again? Keep reading. Comment your views on the show.

Reviewed Rating for Kundali Bhagya 6th April 2021 Written Update Shocking boom: 5/5 This rating is solely based on the opinion of the writer. You may post your own take on the show in the comment section below.