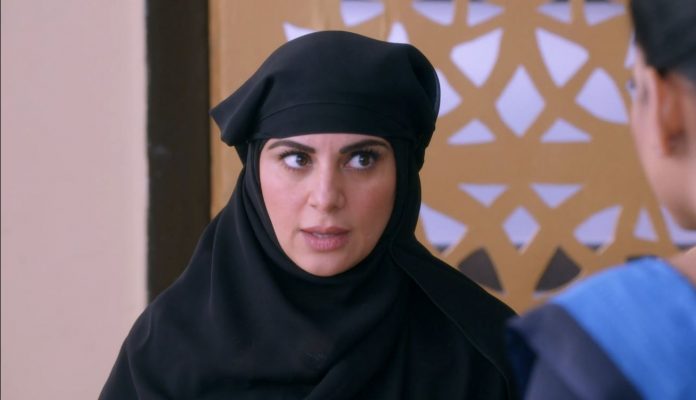 Kundali Bhagya 7th April 2021 Written Update Preeta bold move Mahesh gets terrified seeing Prithvi n the house. He collapses down before telling the family about him. Doctor treats Mahesh. Suresh asks Mahesh not to put pressure on his mind. The family calms down Mahesh. Mahesh finds Mahira, Prithvi and Sherlyn in his house. He can’t take their presence. Janki and Sarla get the good news of Mahesh’s recovery. They wish Mahesh stays fine. Sarla tells that Mahesh shall tell the truth to his family that Preeta wasn’t involved in his accident.

She wants Preeta to get the respect and happiness in Luthra family. Mahesh signs towards Prithvi. He loses out his strength. Prithvi moves aside to get saved from the suspicion. Karan tries asking Mahesh about Pawan. Mahesh faces a partial memory loss. He tells them that he doesn’t remember anything. Karan tells that Mahesh needs rest. Mahesh gets spared when the evil gang realize his temporary memory loss.

Doctor confirms that Mahesh will keep forgetting things, its the side effect of his comatose state. He asks the family not to worry and wait until the situation resolves. Pawan and Prithvi go for a meet. ACP Vijay calls Karan and asks him to put the phone on speaker. He tells them that he is soon going to catch Akshay’s murderer. He leaves the culprit with a warning. Prithvi and Preeta met Akshay that day. They get tensed. Prithvi meets Pawan and wishes him happy holi.

He reminds whatever happened in the past. Prithvi wants Pawan to forget the hurtful past. He tells that he can do anything to save his brother. He promises to ruin Luthras. He tells Pawan that he will not spare anyone in the family. Pawan gets emotional. Prithvi tells Sherlyn that he will not leave Luthras. She asks him not to be mad about Preeta, she is actually helping Luthras. She informs him about Suresh, who is trying to find out about the injection. She handles everything on her own. Prithvi tells her that they have to handle ACP Vijay as well.

Preeta pacifies a terrified Kritika. She tells that police will never reach them, but the police will check the hotel cctv footage, maybe she will get caught. She doesn’t want Kritika’s name to come out. She feels ACP knows something. Prithvi tells Sherlyn that ACP will be knowing about the culprit. Preeta tells that ACP will know about her visit to Akshay. Prithvi tells Sherlyn that he had noticed the cctv cameras. Preeta tells Kritika that police will find her in the footage. Kritika adds that ACP didn’t mention about the footage.

She asks Preeta if Akshay died by the hit she made in self defence. Preeta tells that she can’t say anything. Sherlyn asks Prithvi to destroy the footage to save himself. Kritika suggests the same solution to Preeta. She tells that they will not be involved in the case if they delete the footage. Prithvi and Sherlyn rush to the hotel. Sherlyn tells him that she is more smarter than him. She asks Prithvi to take a disguise and hide his face. He understands his plan.

He asks her if she would also disguise herself. Preeta and Kritika also take disguises and reach the hotel to delete the footage. The police reach there at the same time to get the footage for investigation. Sherlyn tells Prithvi that she has booked a hotel room by fake name. She asks him to go to the room and take a disguise before entering the security room. Prithvi takes a womanly avatar to delete the evidence before it reaches police. Will Preeta succeed in her aim this time? Will Mahesh lose his memory and forget the evil gang’s crimes? How long will Akshay’s murder mystery go now? Do you like this episode twists? Comment below and keep reading.

Reviewed Rating for Kundali Bhagya 7th April 2021 Written Update Preeta bold move: 2/5 Bad twist of Mahesh’s memory loss. This rating is solely based on the opinion of the writer. You may post your own take on the show in the comment section below.