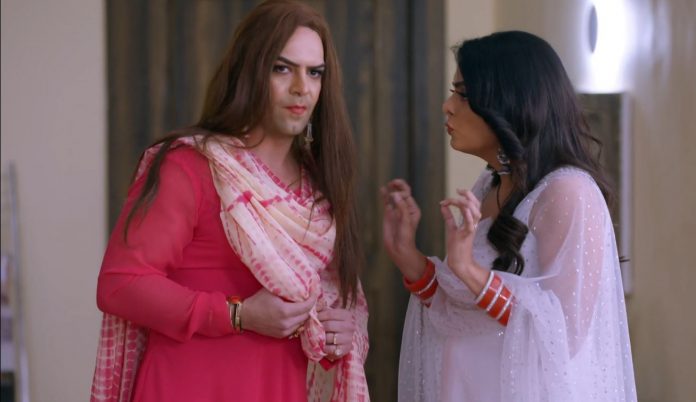 Kundali Bhagya 8th April 2021 Written Update Killer caught The game of disguise begins with Preeta and Prithvi running against time to reach the cctv footage first to delete it. They both have the same aim, same fear and same guilt. Kritika fools the hotel staff and takes Preeta to the security room. Prithvi takes a womanly avatar to fool everyone. He tells Sherlyn that he has become Preeti for the world. She reminds him that he should delete the cctv footage for 3 days at least.

Prithvi tells that he remembers everything. The staff suspects Kritika and Preeta. He thinks to call the manager. Prithvi meets the security guard and tries to bribe to get the cctv footage deleted. Sherlyn waits for Prithvi. She gets a proof and thinks Prithvi has killed Akshay. She still supports her lover. The police also reaches there to check the footage. The staff is worried that the murder case has already affected the hotel badly. The security guard doesn’t accept the bribe. He raises the alarm. He threatens Prithvi that he will get him caught by the police.

He tells that he will not sell himself. He realizes that Prithvi is related to Akshay’s murder. Prithvi sees a window and thinks to run. Preeta reaches the cctv room to delete the footage. Prithvi also tries hard to do the same thing. Preeta also checks for the footage. She doesn’t find anything. She hides from the cops. The guard complains about Prithvi and Preeta. Sherlyn helps Prithvi escape.

Preeta informs Kritika that someone has already deleted the footage. Kritika tells that they should leave. Kritika sees Sherlyn. She suspects Sherlyn. Preeta and Kritika hide. Kritika is worried that Sherlyn will suspect her. Preeta asks Kritika to not tell anyone that she has accompanied her to meet Akshay. Kritika gets worried that Preeta has landed in a big trouble because of her. Preeta doesn’t want to tell anyone about Akshay’s blackmailing move. She wants to protect Kritika’s esteem. Kritika hugs her and thanks. Preeta asks Kritika to just do as she tells her, its for her betterment.

Kritika is very sure that she has seen Sherlyn. Preeta tells that Sherlyn would have come to delete the footage, maybe she is also involved in the crime. Sherlyn tells that she has seen Kritika. Prithvi tells that Kritika won’t get anything, they are safe. The hotel staff becomes a police witness. The guy helps ACP Vijay and tells about the two people who came to meet Akshay on the night of his death. ACP thinks he has got Akshay’s murderer. He takes the guy’s statement. He promises to get the culprit punished. Kritika and Preeta don’t find Sherlyn in the house. They doubt Sherlyn, until they see her. Who is the killer? Who is ACP Vijay going to arrest? Comment your views and keep reading.

Reviewed Rating for Kundali Bhagya 8th April 2021 Written Update Killer caught: 4/5 This rating is solely based on the opinion of the writer. You may post your own take on the show in the comment section below.