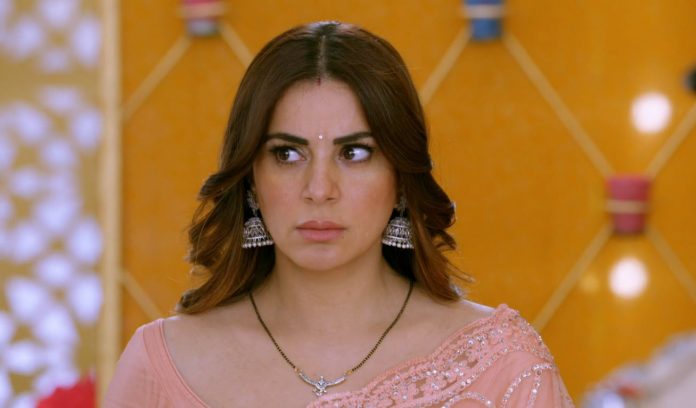 Kundali Bhagya 9th April 2021 Written Update Preeta arrest Sherlyn is relieved that she came home on time. She tricks Preeta and Kritika. She knew that Kritika had seen her at the hotel. She doesn’t get caught. Prithvi is happy that he had deleted the cctv footage. He doesn’t want to get jailed. He didn’t kill Akshay. Kritika meets Prithvi. She apologizes for not being with him on the eve of holi. He tells that he was also somewhere else when she came to meet him. He asks her not to take stress.

She asks him about the ladies’ suit. He lies to her that he bought the suit for her, as a return gift for the shoes she gifted him. She tells him that she will accept the gift, she loves the colour as well. He asks her why is she getting emotional. He tells that he will bring many gifts for her. She is thankful for his sweet gesture. Preeta wonders who had deleted the cctv footage. Karan meets her and tells her that he had seen Kritika and her at the hotel.

Preeta doesn’t want to confess. She asks him why did he go there. He doesn’t tell her anything. She tells that she has some important work. She avoids answering him. Karan tells that he should be the most important person for her. She admits hat he is her priority. Karan romances Preeta asking for a hug. They celebrate holi once again. Rakhi and Kareena meet Kritika and Prithvi. Rakhi wants to know where did they all disappear.

Kritika lies that she was with Preeta in the backyard. Sherlyn knows she is lying. ACP Vijay meets them. He tells them that he got late, the culprit got extra hour of freedom. He wants Rakhi to call Karan, since the news is shocking for Karan and Preeta. He asks Rakhi if they have fled. Kareena tells him that Karan and Preeta are coming. He tells that he has got the news of the culprit, he is good in his work, he has completed the investigations and will arrest the murderer soon. Mahira gets jealous that Karan and Preeta are sharing a hug.

She drops a glass save, breaks their hug and informs them about ACP Vijay. Preeta tells Karan that Mahira has thrown the vase in anger. Mahira tells Karan that it broke by mistake. Karan goes to meet ACP. Mahira tells Preeta that she couldn’t see them together. Preeta reminds Mahira her three-day challenge. She tells that she will always be with Karan. Mahira tells that there is still time for the challenge to end. Preeta is confident that Mahira can’t separate her from Karan. She mentions that her relation with Karan is strong, nobody can come between them.

Prithvi wants to run away before ACP arrests him. He tells ACP that he is feeling suffocated, he wants some fresh air. ACP doesn’t permit him to go anywhere. ACP asks Karan if there are no other members in the house. Rakhi tells them that Mahesh has come out of coma, the rest of the family members are with Mahesh.

He worships his duty. He doesn’t want to leave without arresting the culprit. Kritika is tensed to make a mistake. Mahira watches the drama. She prepares for Preeta’s arrest to win the three-day challenge. Did Mahira kill Akshay to frame Preeta in the murder case? will Preeta get arrested? Is Akshay really dead? What do you think about the murder mystery? Comment your views. Keep reading.

Reviewed Rating for Kundali Bhagya 9th April 2021 Written Update Preeta arrest: 3/5 This rating is solely based on the opinion of the writer. You may post your own take on the show in the comment section below.