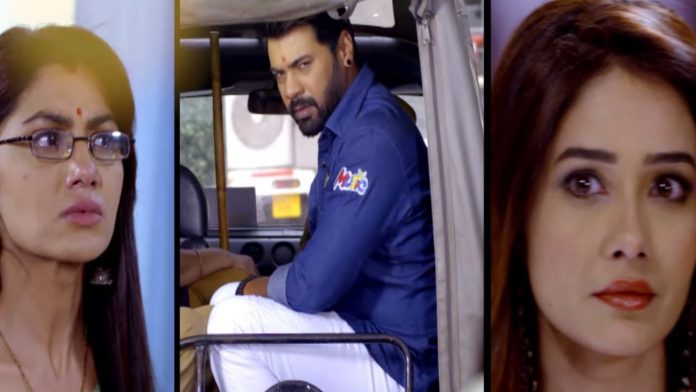 Kumkum Bhagya 14th April 2021 Full Update Tanu accuses Abhi Rhea sees Aaliya’s photo. She is too confused with Aaliya’s behavior. She doesn’t know why Aaliya, Mitali and Tanu didn’t get happy with the good news of Abhi’s recovery. She wants to find out the reason behind the trio’s upset faces. Mitali asks Tanu to hide from Abhi. She tells that Abhi doesn’t know about her yet. Tanu tells that Pragya will tell him everything. She denies to drink that day. Tanu tells Aaliya that Pragya might have spiked her drink.

Aaliya asks her to think of their loss, she should have been careful. They both blame each other and get into a big argument, causing more tension to Mitali. Tanu tells that she wants to find a solution. She asks Aaliya to help her get saved from Abhi. Abhi arrives home in rage. He throws away Aaliya and Tanu’s bags. He tells Aaliya that he is cleaning unwanted things from the house. He warns Aaliya and asks her to leave the house.

Rhea is super shocked to see Abhi’s rage. Abhi asks Tanu not to hide and just get out of his house. He tells her that he has a relation of hatred with her. He mentions that he learnt everything about her deeds, he had kept her away even when he wasn’t in his mental self. He asks Aaliya not to force him to oust her. Mitali tries to save herself. She tells Abhi that Aaliya and Tanu had brainwashed her. Baljeet asks Abhi to let Mitali stay back. Abhi agrees to her. He doesn’t want to see Tanu and Aaliya in his house.

Furthermore, Abhi insults Aaliya to give her the same dose as she served Pragya. He asks Mitali to remember her place and never disrespect Pragya. He asks Rhea to love her mom. He tells Baljeet that he will bring Pragya in his house with all the respect. Aaliya leaves the house. Baljeet worries by her silence. On the other hand, Prachi worries because of Ranbir. She gets a delightful news when Pragya tells her that Abhi has recovered and had come to take her home. Prachi is happy seeing Pragya so happy. Pragya cries with joy.

Prachi tells her that Rhea had informed Ranbir about this news and she got to know this. Pragya tells that Ranbir is a nice person, who helped her in Mehra house. She asks Prachi to just think about Ranbir’s love once. Prachi tells Shahana that she is helpless to hurt Ranbir, but she is also hurt seeing him in pain. She wants to curse herself for hurting him so much. She feels she has lost her love. Shahana tells her that Ranbir didn’t marry Rhea, there is still love to win him back, he doesn’t love Rhea. Prachi has sacrificed her love.

She tells her that she has broke Ranbir’s love, she doesn’t want to get him back, she will try to forget him. Shahana tells her that she loves Ranbir, she can’t make him out of her heart. Prachi wants to keep her love for her family. She wishes her parents unite and stay happy. Shahana feels upset seeing her sacrifice for Pragya’s happiness. Prachi wants to live seeing Pragya’s smile.

Moreover, Aaliya returns to Abhi to make a request. Abhi asks her to go away. She tells him that he had always insulted her in front of Pragya. She makes him realize that he had been unfair towards her, he had made her change into a selfish person by making her insecure. She tells that she will take her memories before leaving. He tells her that he has given her everything she wanted, even got her married to Purab. She tells that he never asked her if she is happy, he had spoilt her first and then didn’t give her the same love.

She asks him did he marry Pragya for the sake of love. She reminds him that it was her wish to make him marry Pragya. She makes him emotional by reminding him their strong bonding. She tells that she had made Pragya away from him on seeing him go away from her. She reasons out that he is the reason for her deeds. She apologizes to him for badly treating him when he lost his memory. She tells him that she always loved him, she was protecting him from Pragya as well. He asks her to never misunderstand Pragya. He doesn’t change his decision.

Aaliya gets tensed when he still wants her to leave. Seems, Abhi changes his decision and keeps Aaliya home. Ahead, Abhi meets Pragya to bring her home. Abhi finally brings Pragya home and also makes Aaliya accept Pragya in the family. Tanu makes a plan to stop Abhi. She gets the police home. Her sudden arrival shocks Abhi, when she asks the police to arrest Abhi on the charges of rape. This stuns Pragya. Tanu tells her that she will separate Abhi and Pragya for 14 years by his long imprisonment. Pragya swears to save her husband from Tanu’s filthy plans. Will Abhi and Pragya have a lovely union awaited since decades? Will they unite or any new hindrance come in their path? Comment your views on the show. Keep reading.

Reviewed Rating for Kumkum Bhagya 14th April 2021 Full Update Tanu accuses Abhi: 3/5 This rating is solely based on the opinion of the writer. You may post your own take on the show in the comment section below.