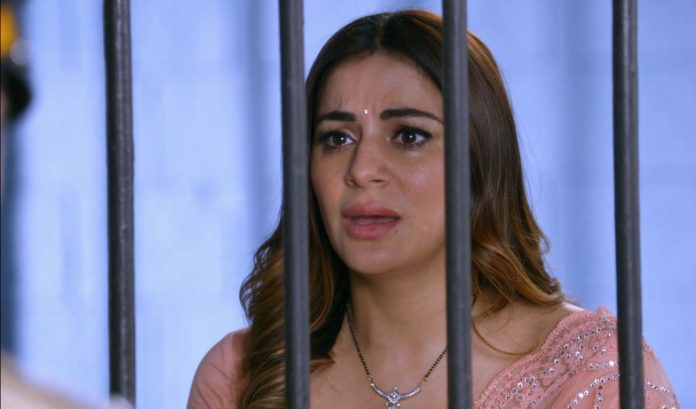 He swears on his baby that he didn’t commit any murder. Sherlyn tells him that he doesn’t need to swear. She warns him. Kritika meets Preeta. She pities Preeta’s state. Preeta wants to know about Karan. Kritika asks her to think for herself right now. Preeta tells that Karan was much disappointed with her. She mentions that Karan had seen them at the hotel. She regrets that she couldn’t tell anything to Karan. She asks Kritika if she had told Karan to help her. Kritika tells that Karan was too angered. She wants to help Preeta by revealing the truth to Karan.

Preeta asks her not to reveal anything to the family. She doesn’t want Kritika’s name to get maligned. She tells that Akshay was a bad person, he deserved to get punished. She tells that Akshay won’t get alive if they reveal his blackmailing crime. She thinks just Kritika will be harmed further. She doesn’t want Kritika to get tension. Sarla and Shrishti reach the police station to meet Preeta. They meet ACP Vijay and tell him that Preeta is innocent.

ACP doesn’t think they are right. He asks Shrishti not to say any nonsense. He tells that they are just wasting his time. He asks Shrishti to come to the court and see the evidences against Preeta. He corrects her. He tells that he has arrested Preeta for the murder crime. He finds Preeta a wrong person. Preeta tells that she trusts the law, she will get back into the family soon. Shrishti vents anger on ACP. He takes her bitterness as a compliment.

Preeta gets emotional seeing Sarla and Shrishti. Sarla tells that she is worried for her daughter. She tells them the same story by concealing Kritika’s name. She tells Sarla that she has killed Akshay if he died by her attack. Sarla believes Preeta. She knows that Preeta can never harm anyone. She asks Preeta not to get troubled, she will be saved, Akshay can’t die by her hands. Shrishti feels someone else has killed Akshay. Preeta tells that police will find the truth for sure. She doesn’t want Sarla to take tension. Sarla asks about Karan’s absence.

Kritika wants to admit her involvement in the matter. Preeta stops her from revealing anything. She asks Kritika to go home. Sarla decides to question Karan and Luthras. She wants to ask them why aren’t they supporting Preeta. Preeta asks Shrishti to stop Sarla from questioning Luthras. Mahira celebrates her victory. Sherlyn asks her what did she win. Mahira tells that she had challenged Preeta and she has won the challenge, she has separated Preeta and Karan. Sherlyn asks what did she do, the situation got in her favor.

Reviewed Rating for Kundali Bhagya 14th April 2021 Full Update Preeta confession: 2/5 This rating is solely based on the opinion of the writer. You may post your own take on the show in the comment section below.