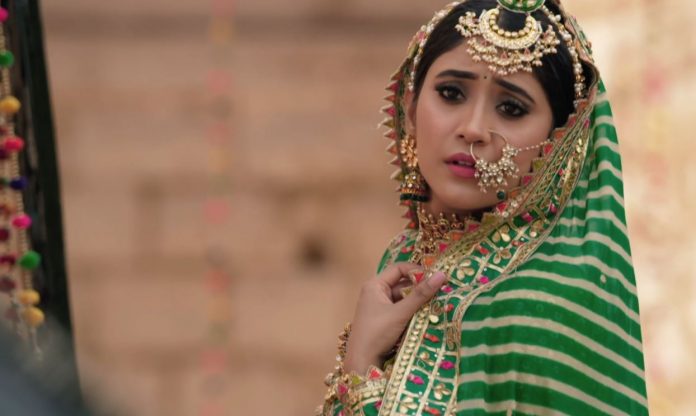 Yeh Rishta Shocker for Sirat Upcoming 21st April 2021 Kartik and Sirat get ahead with the Gangaur rituals. They stay occupied with the thoughts of their love. Sirat always misses Ranvir, who is much close to her heart. She has many memories of him from the past Gangaur. She wanted him to keep fasts for her even if she isn’t in life. She makes him promise that he will keep the fast in her memory.

He promises to keep the fast his entire life, just for her sake. They both decide to keep a fast and reconcile after a fight. Sirat has his beautiful memories in heart. Sirat doesn’t want to have any false hopes from Gangaur. Ranvir also knows that his hopes are falling flat. He doesn’t want to have expectations from his fate. Kartik wants to do the rituals to give happiness to his family.

Kartik and Sirat have good intentions behind making their relation. They are doing everything for the family. Kartik admits to Sirat that he is deeply missing Naira, he has many memories of Gangaur with Naira. Sirat also admits that she has many memories of Ranvir, related to Gangaur puja. Kartik and Sirat get a chance to celebrate Gangaur together, when Ranvir crosses path with them once again. Kartik can’t express himself to the family. He just corners himself to recall his memories with Naira.

He cries secretly, by concealing his weak side. He doesn’t want his family to see him in tears. Sirat i also in tears that she isn’t able to explain her heart about Ranvir. She wants to focus on Kartik and their new relation, which can help her in forgetting Ranvir. She doesn’t want her heart to control her mind. She doesn’t want Ranvir to return ever in her life. She feels Kartik is her future now. She has no hopes of Ranvir’s return. Kartik shows his concern for Sirat in every situation.

Kartik and Ranvir strike a good bonding instantly when they meet. Kartik finds him an interesting personality. Ranvir speaks his take on love. He regrets that his lover is away. Ranvir has no idea that Kartik is the same guy who had ordered the shoes and gloves for Sirat. He is glad to meet Kartik. Kartik blesses Ranvir to soon unite with his lover. Ranvir wishes that his lover Sirat didn’t move on with anyone in her life. He wants to patch up with her, believing that their true love won’t be defeated.

Full Update: Sirat and Ranvir have a close hit and miss, after Kartik blesses Ranvir to get back his love sooner. Ranvir wishes that Kartik gets married soon to his fiancee, since he deserves a life partner. They both make good sweet wishes for each other. Sirat is unaware that they have met and got on friendly terms. Kartik thinks of inviting Ranvir in his marriage if possible. He returns to Sirat and tells her about a humble guy who returned the chunri.

Sirat misses Ranvir and slips into the past memories when she finds Ranvir’s car with a similar cloth ties to the steering, just like the one she had given him when he bought a new bike. She wonders if Ranvir is around. She adds that even if Ranvir returns in her life to win her back with love, she will not accept him since she has moved on with Kartik. She doesn’t want to break Kartik’s faith. She feels indebted to Kartik for the numerous favors he did on her. Kartik and Sirat complete the Gangaur puja together, while Ranvir has Sirat’s memories with him as a company to perform the puja.

The trio gets emotional thinking of their loves and try to keep their feelings a secret. Ranvir wants Sirat to meet him once and forgive him for the cheat. Meanwhile, Devyaani meets Sirat and finds her resembling Naira. She mentions that Sirat is just Naira for her. She welcomes Sirat in the family. She gets glad to know that Kartik is marrying Sirat just to stop her in their loves. Kirti is taken aback by his decision. She advises him to think again, else he won’t be able to come out of Naira’s memories if he sees Sirat in front of him every day. Kartik sticks to his well-thought decision of marrying Sirat and seeks Devyaani and Kirti’s support.

Kartik wants to give a good life to Sirat. He makes a prayer to gain strength to lead a new life with Sirat and kids. Kartik informs Sirat about the wedding venue changed to Goa so that her boxing training doesn’t get any hindrance. She gets grateful to him. They get into a moment thereafter. Ranvir also arrives Goa after shifting from Udaipur just to stay away from his family. A shocker awaits Sirat when Ranvir re-enters her life. Whom will Sirat choose to lead her life, love or responsibility, Ranvir or Kartik? Keep reading to know more. Comment your take on this show.

Reviewed Rating for Yeh Rishta Shocker for Sirat Upcoming 21st April 2021: 5/5 This rating is solely based on the opinion of the writer. You may post your own take on the show in the comment section below.