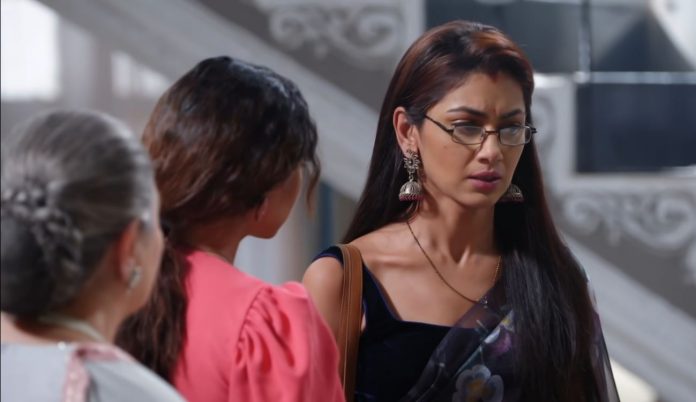 Kumkum Bhagya New entry twist 26th April Full Update Pragya wants to know why is Tanu dragging Abhi if she wants revenge on her. Tanu tells that she will settle scores with her enemies, Abhi didn’t favor her ever. She wants to teach him a lesson that leaves Pragya shattered as well. Pragya doesn’t think that Tanu will win. Tanu asks her to find a good lawyer. Lawyer asks them not to have a catfight in his office.

Pragya thinks its really tough to find a lawyer to fight Abhi’s case. Pragya leaves for home. Tanu feels she is living her life once again. She meets someone and leaves with him. Ranbir follows her. Aaliya tells the family that no good lawyer is ready to take the case, after Tanu got the public sympathy. Aaliya fails to take help from Abhi. Rhea tells them that court shall give the verdict, lawyers can’t decide it. Pallavi tells them that some lawyer will believe Abhi’s truth and fight his case. Aaliya and Rhea hope that Pragya finds a lawyer.

Aaliya also thanks Pragya. She regrets to misunderstand Pragya. Pragya doesn’t have the courage to tell them the truth. Pragya worries that she didn’t find any lawyer. She wants to find such a lawyer who believes Abhi’s innocence. She tries to reconnect to Tanu’s lawyer. She tells him that Tanu is lying, she just wants revenge on him. He tells her that he can’t fight her case. She asks him to help her with reference, some lawyer who can take Abhi’s case.

He understands that she needs help. He apologizes that he doesn’t have any good suggestion. He believes that Abhi is guilty, Tanu has evidence against Abhi already. Pragya tells that Tanu has no evidence. He tells her that Tanu isn’t wrong in this case. He doesn’t entertain her request. Pragya goes to meet Sarita. She asks her help in finding a good lawyer for Abhi. She asks Sarita to think if any of her client is a lawyer. Sarita tries to help her. Prachi enters Tanu’s house to spy on her. Tanu meets the police inspector secretly.

Prachi wonders what is Tanu up to. Ranbir also comes to the same place following Tanu. He makes a silly excuse that he has come for window repair. He manages to convince the guard. Sarita tells Pragya about a lawyer, who works from home, he is good in his work, but not so famous. Pragya wants to meet that lawyer once. She asks Sarita to give the lawyer’s details. Sarita doesn’t guarantee that the lawyer can win the case. Pragya tells that no lawyer is ready to take the case. What will happen next with Raghubeer’s entry in the track? Comment below and keep reading.

Reviewed Rating for Kumkum Bhagya New entry twist 26th April Full Update5/5 This rating is solely based on the opinion of the writer. You may post your own take on the show in the comment section below.