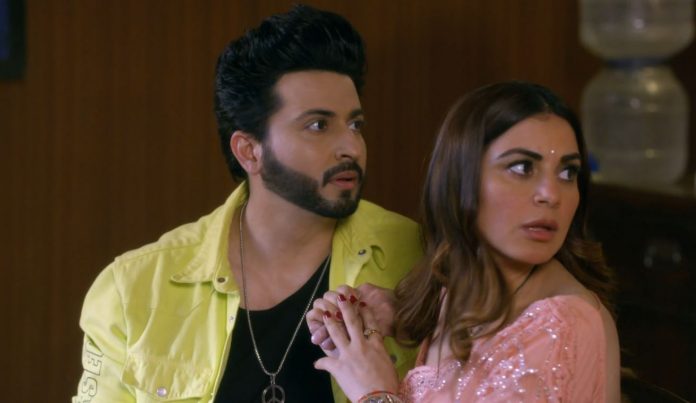 Kundali Bhagya 27th April 2021 Full Update Miracle for Preeta Karan and Preeta come to peaceful terms after confessing their love, once the misunderstanding gets clear. Karan values Preeta’s sacrifice, but didn’t wish her to risk her future for Kritika’s sake. He wanted her to confide the problem so that he could help her in time. Preeta tells Karan that she wasn’t in much trouble, he shouldn’t worry for her. He feels lucky to get an understanding life partner. He apologizes to her. They share some moments of relief.

She knows that he has done a lot to help her. She explains that she was helpless as well in order to save Kritika’s dignity. He is thankful to her that she saved Kritika. He tells her that he is tensed that the hearing is on the same day. She tries to keep him joyful by her jokes, hiding her sorrow. They both have much pain within. They try to share their feelings. On the other hand, Rakhi and Kareena pacify Kritika.

They know that Akshay has wronged Kritika, but she should have told the family about his blackmailing crime. She tells that she shouldn’t take any wrong decision in tension. She values Kritika’s dignity, irrespective of the society’s take on the matter. She asks Kritika to get bold and strengthen herself. Kareena finds Rakhi saying the right thing. She also supports Kritika. Kritika tells that she isn’t upset with them. She asks Kareena not to hurt Sarla or Preeta by her verbal allegations again.

Suddenly, Sameer and Shrishti spot Ruchika and Megha fighting on the streets. They want to know the matter. Megha tries to drag Ruchika. Shrishti tries to hear their argument. Ruchika doesn’t want to talk to Megha. She blames Megha for snatching Akshay from her. Shrishti senses that they both are hiding a secret from them. She feels she should find out their secret. Sameer accompanies her. Karan tells Preeta that Sarla had come home and got into an argument with Kareena, which led to Kritika’s confession.

Preeta tells that she had already asked Shrishti to stop Sarla. He adds that Shrishti didn’t come home. She wonders where did her sister go. She asks him to lie to Sarla to relieve her stress. She tells that Sarla will sleep in peace if he gives her an assurance. He wants Preeta to really get free and come back to them. Preeta gets a big surprise when Kareena visits her to make an apology. Sameer and Shrishti spy on Ruchika and Megha to find out the reason for their fight.

Ruchika threatens to expose Megha’s truth to everyone if she doesn’t leave her house. Megha also warns about Ruchika’s truth. Shrishti tells Sameer that they shall find out the truth before it gets too late. They meet Ruchika after Megha leaves. They question Ruchika about Akshay’s murder. Ruchika threatens to call the police. Shrishti requests her to help them out. She tells that she will also take the help of the police to reach to the matter’s end. She begs Ruchika to just admit the truth, which can prove Preeta innocent.

Kareena apologizes to Preeta. She feels she should have known the truth, she had stopped everyone from helping Preeta, she had been so wrong till now. Preeta forgives Kareena. Kritika tells that she couldn’t see Preeta’s state, she had to tell the truth to everyone. Preeta tells that Karan, Rakhi and Mahesh are already with her. She is relieved that Mahesh has given her an assurance of support. She feels she has the love of both the families. Kareena changes her heart towards Preeta.

Preeta feels dutiful towards the Luthra family. Kareena is glad that Preeta had protected Kritika and took over the murder blame on herself. Preeta becomes a savior angel in Kareena’s eyes. Preeta shows faith on Karan, who would get her freed at any cost. Karan meets Sarla and Janki. He tells them that Preeta will be freed soon, he is standing by her and would prove her innocence in the court. He asks Sarla not to have any fears on her mind. Sarla blesses Karan. Ruchika threatens Sameer and Shrishti about dragging Karan’s name in the mess. What is the secret hidden by Ruchika and Megha? Comment your views and keep reading.

Reviewed Rating for Kundali Bhagya 27th April 2021 Full Update Miracle for Preeta4/5 This rating is solely based on the opinion of the writer. You may post your own take on the show in the comment section below.