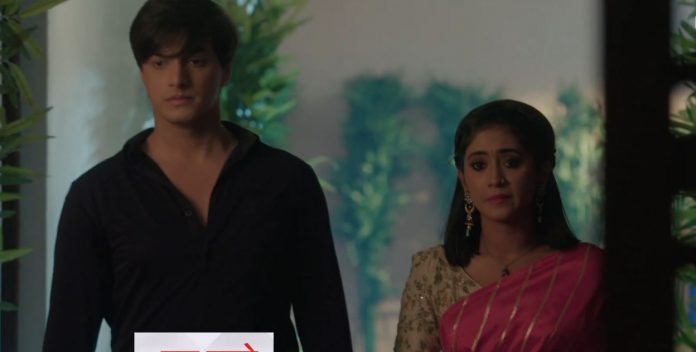 Yeh Rishta Amazing twist coming 5th May 2021 Written Update Kartik big sacrifice Sirat defends herself when Rhea accuses her for having a relationship with her ex. Sirat clarifies that Ranvir is her past, she is no longer related to him, nothing has changed from her side. She leaves the truth to them to accept or reject. She tells Goenkas that she can never force them to accept her and her truth. She mentions that she is getting married to Kartik willingly to move on in her life.

She doesn’t have any place for Ranvir in her life. Kartik is moved to know that Ranvir is bearing a bullet in his chest, he is at a larger risk due to the nerve damage. Kartik is ready to bear the expenses of the surgery. Doctor asks him to sign the consent form knowing the risks involved in the surgery. Kartik connects the dots to know if Ranvir is innocent in the break up story. He wants Ranvir to get a fair chance and meet Sirat once.

He can’t see Sirat punishing herself in anger. Sirat hurts herself that she had loved a guy like Ranvir, who couldn’t value her true love. Sirat regrets that her first love wasn’t worth it. She is upset on her fate that Ranvir has come back. She wants her answers from Ranvir, but has no courage to face him. Kartik learns about Ranvir’s past from Ranvir’s friend.

He decides to bring Sirat and Ranvir face-to-face for a confrontation so that they both can ease out their pain. Sirat doesn’t want more questions to get posed in front of her. She can’t stand Ranvir. Kartik doesn’t want Sirat to run away from her fate. He tells her that she should talk to Ranvir once and seek answers, rather than punishing herself and Ranvir. She is adamant that she won’t meet him.

Kartik lies to Sirat and takes her to meet Ranvir. Sirat happens to see Ranvir at his office, which he ruins in his anger in some time. Sirat loses her cool on seeing him. She has no idea about his injury, which occurred on the day of their marriage. Kartik reveals Ranvir’s truth to Sirat, that Ranvir had parted ways with her just to save her life from his influential father, who threatened him of killing Sirat if he marries her.

Kartik believes in Ranvir’s truth, knowing the latter’s love is much true. He wishes Ranvir and Sirat to come on good terms. How will Ranvir convince the truth to Sirat? Will Sirat forgive him and get willing to return to him on knowing the truth? Will Kartik make a big sacrifice and let Sirat go? What should happen to right their lives? Comment below and keep reading.

Full Update: Kartik persuades Sirat to meet Ranvir once and ask him why didn’t he reach the mandap in time. He asks her why did she run away when she met Ranvir after two years. He doesn’t want her to trouble herself like this. He had seen Sirat and Ranvir’s situation, and sympathizes with Ranvir. He tells that its better that she could express her feelings. He adds that she is running away from Ranvir, which is the same thing she hates. He asks her to withdraw the match, since she isn’t strong enough to fight. He asks her to mentally train herself before losing it. She wants him to just leave.

She feels she is hurt enough, she will not tolerate any pain again. He asks her to counter Ranvir’s truth. Sirat tells that she wants to face her truth, she is his fiancee now, she wants to be Kairav’s mother soon. She tells that she will pursue her career and earn a medal, she doesn’t want to lose her focus. She is thankful that he always supported her. She doesn’t want to lose him. She asks him to not force her. He tells her that she should think to keep his word once and meet Ranvir. He makes a request to her.

Later, Kartik goes to speak to his family, who seems upset with Sirat. He doesn’t want her past to create troubles in her present. He asks them to understand that its tougher for her to deal with the past coming back. Manish asks Kartik to remember his words, past can shoot back any time. Kartik tells that past is also a part of their lives, they have to decide about handling it. He asks Manish not to judge Sirat based on her past, Sirat shall decide about her past and present. He warns everyone to leave Sirat alone.

Rhea tells Suwarna that Ranvir isn’t rich like Kartik, Sirat will choose Kartik for the benefits coming along in this relation. She leaves Manish enraged. Kairav wants Kartik and Sirat to come for the family picture. Kartik gives some time to Sirat. He wants to know if Sirat will stay back with him or not. He wishes that Sirat meets Ranvir for her own sake, she decides who she wants in her life. Kartik learns that Sirat has gone somewhere without informing anyone. Kairav and Nani get panicking that Sirat is missing.

Consequently, Manish vents his anger on Sirat’s disturbing behavior. Rhea enjoys the drama. Sirat reaches the hospital to meet Ranvir and seek her answers. She learns that Ranvir has taken the discharge and left before time. She knows that Ranvir has run away without any reason, because he lacks courage. Kartik wants Sirat to find out why Ranvir didn’t come to the temple that day. He reaches the hospital to see them conversing. He learns that Ranvir had left before Sirat visited. He realizes that Sirat couldn’t talk to Ranvir. He comes across Ranvir’s sister Nidhi.

She asks him about Ranvir’s condition. She wants to tell the doctor about the bullet fragments. Kartik questions her about the bullet fragments, how Ranvir took the bullet on his chest. He requests her to clarify. Ranvir leaves from the hospital in rage. He wants to punish himself. He tells Chandu that he wants to meet Sirat once. Chandu tries hard to stop Ranvir for the sake of his betterment. Sirat feels the same pain. Nidhi reveals that Ranvir was in love with Sirat, he had to pay a price for his love, because of the family, who didn’t accept their relationship.

She adds that Ranvir was madly in love with Sirat, he decided to marry her, but their dad threatened him of killing Sirat to stop the marriage. She reveals that Ranvir had gone to the temple, and got shot there. She tells Kartik that just Ranvir and Chandu know the entire incident. Kartik asks her if she didn’t try to find out about her brother. Ranvir reaches Kartik’s hotel to meet Sirat.

He knows which way to go. He doesn’t want to lose Sirat. Kartik tells Nidhi that he will keep her trust and not reveal the truth to anyone. Nidhi adds that Ranvir had reached the temple to meet his bride Sirat, he had taken the bullet that was meant for Sirat, he saved her life from the assassin’s bullet, but had to lose his true love. Kartik realizes that Ranvir’s love for Sirat is unmeasurable. He decides to unite Ranvir and Sirat forever. He isn’t selfish to come between two true lovers.

Reviewed Rating for Yeh Rishta Amazing twist coming 5th May 2021 Update5/5 This rating is solely based on the opinion of the writer. You may post your own take on the show in the comment section below.