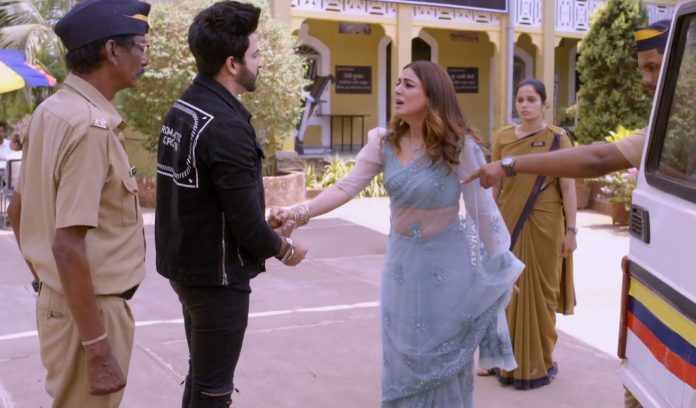 Kundali Bhagya Preeta breaks down Update 7th May 2021 Karan and Bakshi struggle to find Ruchika. Prosecutor adds that the court will not believe Ruchika as well, even if they present Ruchika as the witness, she maybe paid to give a statement in Preeta’s favor. He adds that Preeta had deleted the cctv footage of the hotel in order to save herself from getting caught. He tells that Preeta is really the murderer, Kritika and Preeta are the crime partners, Preeta would have not taken desperate measures if she wasn’t behind the murder.

Preeta gets helpless when she gets badly framed in the crime. Kritika is worried on hearing the allegations. She wishes to help Preeta. Prosecutor asks the judge to punish the guilty Preeta Luthra. Judge decides to pass the verdict, knowing Preeta is the murderer. Karan and Prithvi worry for Preeta. They don’t want Preeta to get jailed. The family gets shocked when Karan stops the judge from passing the verdict. Karan takes the extreme step in desperation.

He can’t let Preeta get jailed for years. He accepts that he had killed Akshay, while Preeta is totally innocent in the entire case. Preeta is taken aback by his confession. The family asks Karan not to take the blame on himself. Prithvi is glad that Karan took the blame and will be out of Preeta’s life from now. Karan and Preeta exchange sorrowful stares.

Karan keeps his promise of protecting her. He wants to sacrifice his life for the sake of her freedom. She knows that they are meant for each other, but aren’t destined to live together. She tells the judge that Karan is lying, he is simply taking the blame on her to save her. Mahira gets worried by Karan’s confession, which will land him in the jail. Karan asks the judge to punish him. Sarla and Rakhi defend Karan. Prithvi tells that Preeta can never kill anyone. He defends Preeta, while Mahira defends her love Karan.

Judge asks Bakshi to explain his clients to follow the court rules. Preeta tells that Karan is innocent. Karan tells that he murdered Akshay. Judge asks her not to defend her husband. Kritika feels guilty that Karan and Preeta are suffering because of her. Karan cooks up a story to prove that he had killed Akshay that day, on knowing that he was blackmailing Kritika. He tells that Akshay was alive after Preeta’s attack.

He tells that Preeta had hit him in self-defense, she didn’t commit any crime, she was scared and left from the hotel at the same instant when he was around with Mahira. He lies that Kritika told him about Akshay’s misdeed, he lost his control on knowing Akshay’s crime and went to punish him. He accepts that he had killed Akshay in rage. The family realizes that Karan is just making a story to save Preeta. They get emotional on his sacrifice. Karan asks the judge to punish him. Preeta requests the judge not to believe Karan.

Judge sends Preeta out of the court, because of her constant interference in the proceedings. Preeta apologizes. Preeta gets freed from the murder charges. This relieves her family, but puts equal tension on Karan’s side. Judge issues an arrest warrant for Karan. He orders to file a new case against Karan Luthra. Karan gets arrested. Preeta and Luthras cry for Karan. Karan seems happy that he had at least protected her. Preeta gets separated from him. She hugs him emotionally, before he gets dragged by the police.

Sherlyn stops Mahira from going after Karan. The verdict brings a painful moment for the family. Preeta rebukes Karan for his big mistake. She asks the police to release Karan. Karan asks her to calm down. She goes mad in rage that Karan is getting punished when he didn’t commit any crime. She tells that they shall find the real culprit than confessing the crime. She loses faith on the law. She feels Karan has wronged her, she won’t be happy if he goes to the jail instead her. Do you think Karan took the right step or could he find a better way out to help Preeta? Comment your views. Keep reading.

Reviewed Rating for Kundali Bhagya Preeta breaks down Update 7th May 20213/5 This rating is solely based on the opinion of the writer. You may post your own take on the show in the comment section below.