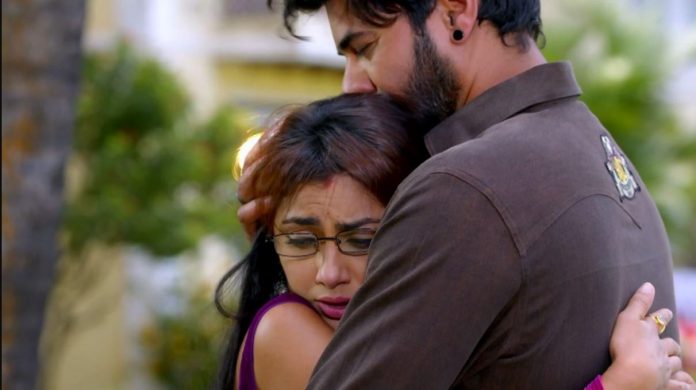 Kumkum Bhagya Biggest twist ever Update 10th May 2021 Pragya is in tension after speaking to Tanu. Abhi finds her worried. He asks her what did Tanu say. Pragya doesn’t tell him anything. She tells that its enough that they are together. Raghuvir apologizes that they missed to save the audio clip. He asks them to collect the evidences in three days. Abhi is thankful that he had come to help them in an injured state. He takes Raghuvir to the hospital.

Mehra mansion gets burnt in a fire accident. Consequently, the family reaches their farm house. Pragya and Abhi also come home. They tell that Raghuvir is okay now. Baljeet pampers Pragya like always. Rhea asks Aaliya to help her set her room. Ranbir and Aryan feel nostalgic and recall their childhood memories. Baljeet asks Pragya to get rid of the legal case, only then she will find her complete happiness with him.

Abhi pleases Pragya to cheer her up. He tells her that she has kept their marriage vows with sincerity. She tells that she has failed to prove his innocence, she couldn’t present the audio clip, she got fooled while helping a lady at the court, which was actually Tanu’s trap. He tells her that she gives him strength, he is lucky to get her. He tells that he is nothing without her. He asks her not to lose her smile which actually makes his day. Abhi attends a call.

Pragya wishes for his clean chit release from the false case. Aryan tells that Ranbir is doing a lot for Prachi. Ranbir gets aware of Prachi’s presence. Aryan tells that Ranbir has done a lot to help Abhi get the bail. Ranbir tells him that Prachi doesn’t matter to him, he had asked him clearly and she refused to his love, he helped Abhi because he loves him, he wants his welfare, he doesn’t love Prachi, he doesn’t care for her emotions.

Prachi gets hurt by his words. Aryan sees Prachi leaving and tells that she heard their conversation. Ranbir tells that he was aware and spoke such things deliberately to conceal his feelings for her. Meanwhile, Aaliya gets disappointed with Pragya. Pragya is positive that Abhi has come home. Aaliya tells that they just got a bail, he didn’t get a clean chit. She asks Pragya to talk to Tanu and try to compromise, any deal for Abhi’s freedom. Pragya doesn’t want to compromise. She asks Aaliya to give her time.

Aaliya asks her to do anything. She accuses Pragya for the problems. Baljeet stops Aaliya from reprimanding Pragya. She believes that Pragya will save Abhi at any cost. They hide the arguments from Abhi. They decide to keep him happy. Abhi enjoys his family time. He praises his wife. Aaliya and Baljeet leave them alone. Shahana calls Pragya and informs about Sarita’s injury. Pragya goes to meet Sarita. Sarita doesn’t want Pragya to worry for her.

On the other side, Tanu goes mad for Abhi. She confesses her love to him. She calls him up to profess her love. She asks him to accept her deal and marry her, since Pragya won’t be able to save him from the jail. She hopes that he will joyfully talk to her after the false accusations posed by her. Abhi isn’t interested in talking to her. He disconnects and blocks her number. Tanu grows angry on his behavior. Tanu meets Pragya to keep the same deal. She asks Pragya to leave Abhi forever and get Abhi married to her. She threatens to ruin his life if Pragya doesn’t leave him. Pragya gets troubled by Tanu’s biggest demand of her Kumkum. What should be Pragya’s step now? Comment your views on the coming twists and keep reading for more updates.

Reviewed Rating for Kumkum Bhagya Biggest twist ever Update 10th May 20213/5 This rating is solely based on the opinion of the writer. You may post your own take on the show in the comment section below.