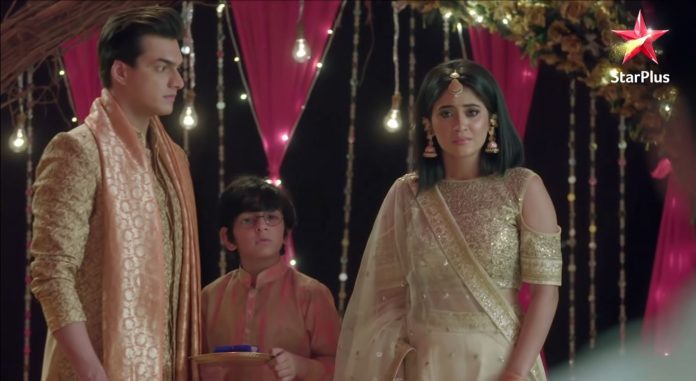 Yeh Rishta Sirat final decision Upcoming 10th May 2021 A very emotional episode when Kartik drops Sirat at Ranvir’s office to unite them forever. He asks Sirat to vent out her anger, frustration, suppressed emotions and her numerous questions, since Ranvir is in front to answer everything true. He wants Sirat to not control herself today. He persuades her to ask Ranvir if he had come at the temple to marry her or not. Sirat punches Ranvir in anger and reprimands him for being a coward to leave her in the mandap and not show up for two years.

While beating him, she comes across his chest wound. She questions him about it. Ranvir tries to cover it up, but Kartik answers about it. Kartik doesn’t want Ranvir to keep any misunderstanding between Sirat and him. He tells Ranvir that some day the truth will eventually come out. He answers Sirat that Ranvir was shot while saving her life on the marriage day. Sirat is shocked to know that Ranvir had risked his life to save her, and didn’t even inform her about it.

Kartik tells Sirat that Ranvir still bears the bullet fragments in his chest as her memory. Sirat grows emotional. Kartik leaves them to talka and sort out their issues. Sirat insists Ranvir to come clean by saying the truth. Ranvir narrates the incident that took place when he arrived at the temple and got happy seeing his bride waiting. He tells that his dad had sent the assassin to terminate her, but he had come on time to save her.

Sirat breaks down into tears when Ranvir clears all her misconceptions about their love. He tells her that he never cheated her, he was hospitalized for much time and had returned to meet her Nani. Sirat didn’t knew anything such. She feels terrible to misunderstand him for years and keep hatred for him. Kartik and Sirat get separated for now. Kartik has mixed emotions in his mind. He doesn’t love Sirat, but knows that Kairav loves her. He knows Kairav’s needs for motherly love. He wanted Sirat to be with Kairav, but he can’t get selfish to separate Sirat and her true love.

He speaks to Kairav about Sirat and Ranvir. He clearly mentions that Sirat has reunited with her love Ranvir, and now she won’t be coming back to Goenka family. Kairav is shell shocked to know that she left them. He can’t afford to lose Sirat. He asks Kartik to get Sirat when he returns. Kartik fails to explain Kairav that Sirat isn’t made for their family, but for Ranvir, who really deserves her. He wants Sirat and Ranvir to get their love and stay happy. Kartik takes a step back with much strength.

Meanwhile, Sirat tells Ranvir that he is really brave to take the bullet on himself. She gets emotional and hugs him. Ranvir tells her that he was more hurt on the day when he witnessed her engagement with Kartik. He wants to forget everything and just enjoy their moment. They both turn caring for each other, like before. They relive their special moments to forget the worst phase of their lives.

Moreover, Manish and Suwarna find Kairav worried. They grow equally tensed to know the outcome of Sirat’s relationship with Ranvir. They realize that Kartik is parting ways with Sirat. They are aware that Kairav won’t be able to handle Sirat’s leaving. Kartik wants to reach home and explain the entire scenario to Kairav. He feels sorry for his son, who had tied many hopes with Sirat. Ranvir tells Sirat that they had a hit and miss on the Gangaur day. He adds that she had become his dream, he was always longing for her.

Ranvir gets nervous to ask Sirat if she will keep her engagement with Kartik and get back to him. He requests her to not leave him again. Sirat falls in a big dilemma. Kartik learns that Ranvir and Sirat’s lives are in danger once again because of his family. Kartik rushes to help the lovers. Sirat can’t decide which way to go, either Ranvir or Kartik. She knows Kartik’s genuine goodness and his sacrifices. Will she follow her heart or mind? Will she choose her love or responsibility towards Kairav? What should be her choice? Comment your views and keep reading.