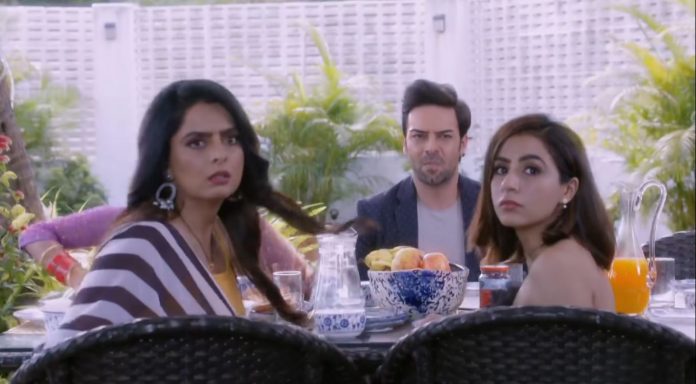 Kundali Bhagya 20th May 2021 Written Update Mystery twist Megha calls Prithvi and angrily accuses him for sending someone in disguise to steal Akshay’s phone. She tells that he wants to make sure that he gets all the evidences to stop her from blackmailing him. Prithvi has no idea what is she talking about. He tells her that he didn’t send anyone to steal the phone. She doesn’t believe him when he denies. She tells him that Akshay’s phone has the evidences, that’s why everybody is after the phone. He asks her who else had come.

She tells him that Preeta, Shrishti and Sameer also came home in kinners’ disguise to steal the phone, but someone else had stolen it from Preeta. She tells him that Preeta was close to find the evidence, but failed. He realizes that Preeta has lost the phone. He gets happy that Karan will still stay in the jail. She threatens him for money. She asks him to pay her 30 lakhs if he wants his truth to stay a secret. She also promises to find out the person who ran away with the phone. Prithvi doesn’t want to get threatened by Megha. He wants to teach her a lesson.

While he is dealing with Megha, someone enters the Luthra house. Its the same person who had stolen the phone from Akshay’s house. The person enters a room and hides. On the other hand, Pammi gets a sprain in her foot and gets on the bed. Rakhi calls Preeta to inform her that Pammi needs her held. She calls Preeta home. Sherlyn meets Pammi, who suspects her again. Pammi asks her where did she go.

Sherlyn asks Pammi not to spy on her, else she would tell her truth to the family. Both of them get threatening each other. Pammi isn’t scared of Sherlyn. She thinks she is very clever herself to defeat Sherlyn and Prithvi. She asks Sherlyn to leave. Pammi senses that some trouble is going to bother them soon. She alerts Suresh about her premonition. Suresh doesn’t take her seriously. Pammi wants to make Rakhi and Mahesh see the truth of both their Bahus Sherlyn and Preeta. She feels both of them are useless and unworthy to be Luthras.

She vows to expose both Sherlyn and Preeta’s truth. She doesn’t realize that Preeta is a gem at heart, unlike Sherlyn, who is totally a fake personality. Furthermore, Preeta arrives home with Sameer and Shrishti. They carry Akshay’s phone with them. Preeta meets Pammi to see her sprained foot and do the necessary aid. Rakhi catches Sameer and Shrishti in a moment. Preeta treats Pammi’s sprain. She hopes to change Pammi’s thinking about her.

Pammi asks her about Sherlyn. Preeta has no idea about Sherlyn. Pammi admits the truth that she dislikes Sherlyn and Preeta. Preeta doesn’t feel bad. She accepts her anger, that’s actually her love and concern for Karan. She tells Pammi that she understands her concern. She promises Pammi that she will not let Karan pay a price for the crime he didn’t commit, she will bail out Karan and bring him home, and also get a clean chit for him in Akshay’s murder case.

She wants Pammi to trust her. Sameer drops Akshay’s phone by mistake. Pammi goes to pick it. He makes a mistake and shouts aloud that its Akshay’s phone, she shouldn’t pick it. Hearing this, Sherlyn, Mahira, Kritika and Prithvi get a huge shock. It gets more shocking when Kritika runs to get the phone. Kritika picks the phone and seems tensed. She fears that Akshay’s phone still has her pictures, or the evidence of his murder. Kritika behaves suspicious. Prithvi meets Rakhi to offer help and take Karan’s place.

He tells her that Karan isn’t with them and may not be with them for long, but he is there to help. Rakhi asks Prithvi not to stress, since she has Karan’s wife Preeta with the family, who would do all the necessary things for them. She is glad that Preeta is taking care of Karan’s needs as well. She tells him that Preeta is doing her work and fulfilling every responsibility as a daughter. She feels proud of Preeta. Prithvi loves Preeta for her kindness, but doesn’t want her to be dutiful towards Karan. Who is the mysterious Luthra who wanted to steal the phone and hide the evidence? Comment your views. Keep reading.

Reviewed Rating for Kundali Bhagya 20th May 2021 Written Update Mystery twist4/5 This rating is solely based on the opinion of the writer. You may post your own take on the show in the comment section below.