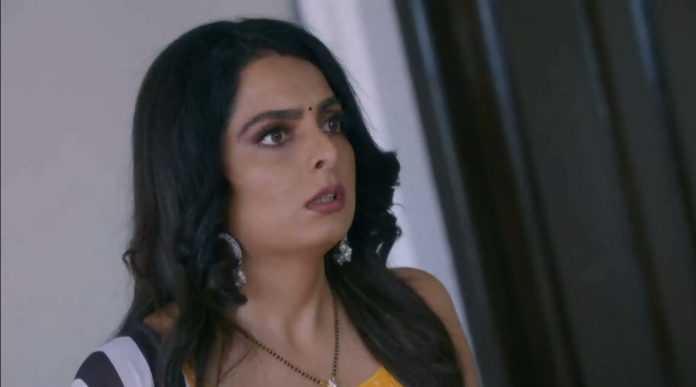 Kundali Bhagya Sherlyn big secret 21st May 2021 Update Pammi doesn’t want to melt her heart for Preeta. She thinks she shouldn’t get innocent like Rakhi, she has to fulfill her promise and expose Preeta’s truth to Rakhi and Mahesh. She realizes that Preeta acts goody all the time and fools the family. Sameer pampers Shrishti. He asks her to stop fooling him later. She tells that she is working hard to crack the password to unlock Akshay’s phone. Preeta asks Shrishti not to trouble Sameer. Shrishti tells her that she is busy in a tough job, Sameer is helping her.

Shrishti tells that Akshay had kept double password. Preeta tells that Akshay is a blackmailer, he would keep wrong names for the contacts. She asks Shrishti to find out the password, they may get many evidences from the phone. She thinks they should hire a professional to unlock the phone. Sameer tells that he shall take help from Rishabh’s sources. Prithvi wants to find out what is Preeta planning. He wants to divert her mind before she doubts him.

Prithvi doesn’t find Preeta in her room. He looks for Akshay’s phone. Rakhi finds him checking Preeta’s room and questions him. He tells that he was going to visit Karan, he came to pick up some clothes for Karan. Rakhi tells him that Preeta has already taken clothes and other necessary things for Karan. Pammi tells Suresh that the family loves Preeta, because Preeta cares for the entire family. Suresh asks what’s wrong in that, Preeta is sensible and caring, she is a nice person to look after everyone.

She tells that Preeta is deliberately keeping the family pleased for fulfilling her greedy motives. He asks her not to get after Preeta, who is genuinely caring and true. He feels disappointed that Pammi didn’t change her thinking even when Preeta came running to treat Pammi’s sprain. He wants her to value Preeta. She thinks Preeta has done a magic on Suresh as well. She believes that Preeta and Sherlyn are evil.

Preeta tells that they shouldn’t tell anyone about the phone, they shall not give false hopes to the family, they shall find the evidences first and then make a revelation to the family. Mahesh tells Rakhi that he is going with Suresh to visit Karan. Suresh tells that Mahesh has packed Karan’s favorite food with love. Rakhi wants to go along. Mahesh tells that he wants to meet Karan as a friend and share his grief. Rakhi agrees to give father-son some time together. Preeta joins the family for breakfast. Preeta tells Rakhi that she will just finish some work in the library room. Sameer stops Pammi from picking Akshay’s phone.

His words alerts everyone in the family. Kritika picks the phone. Prithvi realizes that Akshay has evidence against him. He fears to get caught. Karan feels restless in the lockup until he meets Mahesh. Mahesh succeeds to cheer him up. They have a light moment. Mahesh ends up crying. Karan gets emotional to watch his tears. Mahesh tells Karan that he will get the team of lawyers to bail out Karan and take him home at the earliest.

Karan tells Mahesh that he loves him a lot. He feels strong that his dad is with him. Preeta tries to find out the persons whom Akshay was blackmailing. Prithvi keeps an eye on Preeta. He learns that Akshay was blackmailing Sherlyn as well. He is shocked to know that Sherlyn has killed Akshay. He confronts Sherlyn and wants her to admit her crime to him that she had killed Akshay. Will Sherlyn confess her crime? Keep reading to know how the track (Akshay’s Murder track Running since months)comes to an end. Comment your views below.

Reviewed Rating for Kundali Bhagya Sherlyn big secret 21st May 2021 Update2/5 This rating is solely based on the opinion of the writer. You may post your own take on the show in the comment section below.