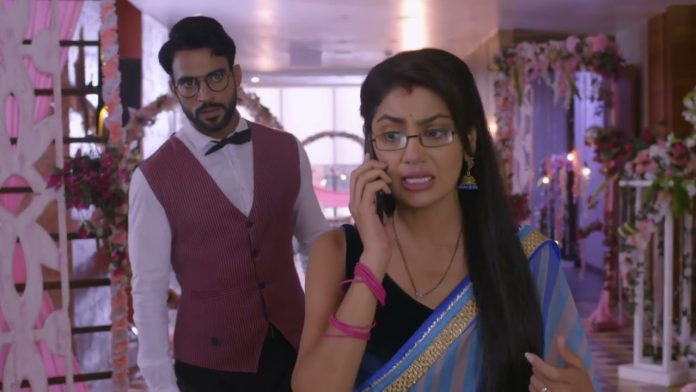 Kumkum Bhagya 28th May 2021 Written Update Shock attack Tanu is shell shocked to see Pradeep. Pradeep serves the drink to Tanu in the waiter’s disguise. He asks Tanu to meet him on the terrace. Pragya stops Tanu from going. She catches Tanu and thinks that Tanu is going to lose consciousness after consuming the spiked drink. She signs Rhea to record their conversation. Pragya starts questioning Tanu to get her answers. Rhea records the video.

Pragya tells Abhi that they shall wait until Tanu gets completely intoxicated. Tanu tells Pragya that she hates her, she wants to marry Abhi, she can do anything to get him. Pragya asks her to accept that she had falsely accused him of rape to trap him. Abhi asks Tanu to admit it that the blames were false. Tanu doesn’t answer. Pragya asks Tanu to admit that she got fake evidences. Tanu tells that she went to Abhi’s room. Pragya asks her to answer that the accusations are false.

Tanu tells that she had gone to Abhi’s room that day. Rhea asks Pragya about Tanu’s husband. Pradeep looks for Tanu to drag her away from everybody. Pragya tells that they can’t depend on Pradeep’s coming. Tanu doesn’t tell anything well. Abhi tells that its not useful, they have to prove Tanu’s mistakes and send her to jail. Pradeep happens to see this. He understands what’s going on.

He doesn’t ignore his instinct. He can’t let Tanu fall into a mess. Pradeep doesn’t want Tanu to get jailed. He is obsessed for Tanu. He plans to send everyone out. The family goes out to check if anything is burning. Rhea cares for Ranbir who deals with the short circuit alone.

He tricks Pragya and Rhea to distract them, until he takes Tanu with him. He takes Tanu to a room and brings her to senses. Pragya looks for Tanu. Pradeep tells Tanu that someone had spiked her drink, she was under the influence of a sedative. He asks Tanu to trust him, Abhi and Pragya had given her the sedative. He asks her not to marry anyone else. Tanu is happy and thankful that he saved her from Pragya’s plan. He then confronts her about marrying Abhi. She accepts that she is marrying Abhi just because she wants to get financially stable, she wants to pay off their debts and help him as well. He tells her that even if she gets the money, she will never intend to help him.

He knows that she is very cunning. He doesn’t trust her. They both land into a heated argument. He asks her not to marry Abhi, but she stays rigid. She tells him that she can’t leave the golden chance, finally her dream of becoming Abhi’s wife will be fulfilled. Pradeep threatens to tell her entire plotting to Abhi and get her kicked out right now. He tells her that he can fail her plan in a second.

Abhi and Pragya reach that room and wonder how did Tanu reach there in the intoxicated state. Abhi tells that he will break the door. Tanu hits on Pradeep’s head. Everybody wonders how did Tanu disappear. Shahana asks if Pradeep had come and took Tanu along. Abhi and Pragya find Tanu. Tanu manages to make Pradeep fall unconscious to stop him from meeting Abhi.

Further, she hides Pradeep in a cupboard. She tells that none should know about Pradeep until she gets married to Abhi. Pragya and Abhi learn from Singhania that Tanu is feeling insecure with them. Singhania tells that he will be making a video call to them and find out if Tanu is okay with them. He tells that he will ensure Tanu’s safety by seeing her on the video call, but if Tanu doesn’t receive his call, then he will get the cops there. He threatens them to keep Tanu safe and happy. Abhi doesn’t care for the threatening. Abhi and Tanu reach for the engagement.

Rhea tells Ranbir that she gave a powerful pill to Tanu, it will affect her for some time. Tanu asks Abhi to rush with the engagement. Pragya tells Tanu that they both want the same thing this time. She also wants Abhi. Tanu stays under the influence of the sedative. She feels too sleepy. She then falls asleep during the engagement. Pragya understands why Tanu fainted, but wonders why Pradeep didn’t come by now. Abhi tells that they shall try asking Tanu once again, maybe they find a solution. Pragya tells that Tanu is totally unconscious, she can’t tell anything to them. Pragya tells Abhi that they should call Pradeep and find out. He calls Pradeep.

Rhea tells Pragya that Tanu will gain consciousness in some time. Pragya tells that Singhania will come if Tanu doesn’t get up. Abhi tells that he has old techniques to wake up Tanu. Rhea finds a phone ringing. She goes to check if there is any intruder in the house. She alerts everyone. The entire family rushes to check Pradeep’s ringing phone, when the sound is coming from the cupboard. Will Tanu get conscious in time and manage to stop them from seeing Pradeep? Keep reading. Comment your views below.

Reviewed Rating for Kumkum Bhagya 28th May 2021 Written Update Shock attack: 4/5 This rating is solely based on the opinion of the writer. You may post your own take on the show in the comment section below.