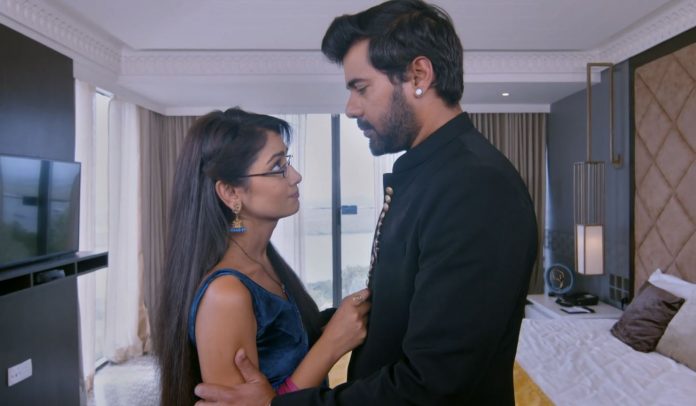 Kumkum Bhagya 31st May 2021 Written Update Big twist Pragya insists Abhi to sit for the engagement. Abhi unwillingly gets engaged to Tanu. Tanu gets pleased with the outcome of her plan. She gets Singhania’s call. She informs him that Abhi and she just got engaged. Abhi gets too upset. Pragya stops him. Prachi doesn’t know why Abhi got upset. Ranbir says Abhi didn’t wish to get engaged, he wanted Pragya to stop the ceremony some way.

Ranbir finds the manager locked in a room. Manager tells him that the waiter who just left fooled him by cooking up a story, the waiter made him fall unconscious. He asks Ranbir to find that waiter. Ranbir wants to find out who was that man in waiter’s disguise. Abhi tells Pragya that she had to stop his engagement, she had told him that he won’t get engaged, but he got engaged with Tanu. Pragya asks him to calm down. Abhi tells him that he doesn’t want to live with Tanu, he can go to jail instead that. She isn’t ready to see him behind bars.

Pradeep gains conscious and finds himself locked up in the car trunk. He shouts for help. Tanu doesn’t want Pradeep to tell anyone the truth. She is raged up that Abhi didn’t willingly get engaged to her. She tells that Pragya shouldn’t come in her way. She wants to teach them a lesson. She can’t see them winning. She calls Singhania. She wants him to be careful, informing that Abhi and Pragya spiked her drink and made her faint down during the engagement. She tells that she can’t wait for ten days, she wants to marry at the earliest.

Singhania suggests something. She gets ready to execute her new plan. Abhi asks Pragya not to judge him that he is behaving weak. Pragya understands him that he loves her, he is afraid of losing her, accepting weakness isn’t anything wrong. She knows he is strong, love is strength and weakness too, it isn’t bad at all to share his feelings. He tells her that she is his life. He sings her praises. Abhi asks Pragya to always keep him protected.

Pragya promises him. Ranbir meets them and tells them about a waiter he suspected. Mitali also adds up the hints. She tells that she had also seen the waiter, she suspected Tanu on seeing her with him. Ranbir and Mitali tell them what they had seen. Mitali tells that Tanu fooled her, she had fainted the waiter and took him away. Abhi tells that Pradeep had come to stop the engagement, he had come in the waiter’s disguise, but Tanu took him away. They have to find out Pradeep. Abhi tells that he will track Pradeep’s phone and get his location. Pragya tells that just Pradeep can tell them the truth. Tanu gets someone’s call at midnight. She gets worried hearing the strange buzzing sound. She thinks Pradeep is calling her to scare.

She calls her driver and asks him to free Pradeep from the car. She feels she made a big mistake to leave Pradeep to die. She thinks if he gets saved, then he will not spare her. Pragya tells Abhi that Tanu had hurt her own husband. Abhi tells that many people marry for their selfish motives, unlike Pragya who really loves her husband. He feels Pragya has values and true emotions. He believes that she will always protect him from all the problems. Tanu stays stressed about Pradeep. She receives a shocking news that Pradeep is dead.

She can’t believe it. Driver tells her that he has seen Pradeep lying dead. He adds that maybe he died because of suffocation or drugs overdose. Tanu asks him to handle the matter from here. She instructs him to get rid of the dead body. She thinks its good that Pradeep is dead. The driver sends him Pradeep’s picture.

She gets it confirmed. She thinks Pradeep was a threat for her, now he won’t be there to tell her truth to Abhi. She feels freed from all the problems. Tanu keeps a new condition for Abhi. She prepones the marriage date. She asks Abhi to marry her within five days. Abhi doesn’t get convinced, but Pragya asks him to play along until they find evidences against Tanu.

Ranbir asks Aryan to be motivated for workout. Aryan gets tired of the workout. Rhea meets Ranbir. She asks him to help her since her trainer didn’t come. Ranbir goes to help her with the weights. She likes to get his support. He trains her as a friend, but she finds love in the moment.

He gets uncomfortable by her stares. He wishes her all the best for the workout. She feels he is really shy. She wants him to become romantic. She loves him a lot. Abhi and Pragya have a sweet coffee moment. She grows conscious by his lovely stares. She likes to make coffee for him. Abhi tells that he also wants this share of happiness, he will make coffee for her.

He know that she finds happiness in his happiness, because of her love. He also wants to show his love for her. She feels lucky to be his wife. He makes coffee for her. Pragya tells that he really made the best coffee. He tells that he felt she is going to vomit it. She tells that she can’t share the best coffee. He snatches the cup from her to taste it. He dislikes the bitter coffee. She tells that the coffee was really sweet. She adds that she genuinely liked the coffee. She wants to spend time with him. Mitali informs them that Tanu has come to meet them. Will Abhi agree to marry Tanu on an earlier date? Keep reading.

Reviewed Rating for Kumkum Bhagya 31st May 2021 Written Update Big twist: 3/5 This rating is solely based on the opinion of the writer. You may post your own take on the show in the comment section below.