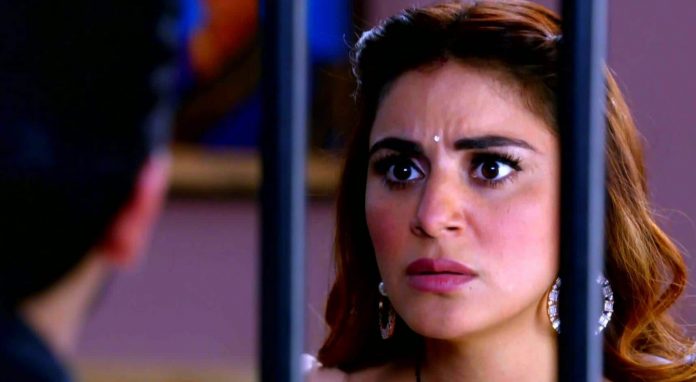 Kundali Bhagya 29th May 2021 Written Update Preeta blamed Mahira gets rid of Preeta’s suspicion. She thinks of meeting Karan once. She stays concerned for him. Mahira visits Karan in the jail. She shows her real concern for Karan. Karan knows that she has obsession for him, but doesn’t want her to name that love. He knows that love makes a person selfless. Mahira tells him that Preeta was sleeping comfortably in the room, while knowing that Karan is sleeping on the floor in the cell.

She criticizes Preeta, thinking he will believe her. He believes Preeta. He knows that even Preeta would be sleeping on the floor by leaving all the comforts. He tells Mahira that he loves Preeta a lot, she is the one who made him understand love, he believes Preeta and her love. He confesses his feelings for Preeta. This leaves Mahira upset. She doesn’t tell him anything and makes a leave. Karan hopes that Mahira understands his love for Preeta and spares him.

Furthermore, Sarla also pays a visit to Karan. She feels sorry that she never believed or understood his true heart before. She apologizes to Karan for always cursing him to be never happy. She takes back her bitter words. She blesses him to be always happy and soon unite with Preeta. She shares an emotional moment with Karan.

On the other hand, Sherlyn meets Pammi and tries to fool her, since Pammi had seen her in the thief’s disguise. She doesn’t want Pammi to tell anyone that it was her. She worries that Pammi can identify her. Pammi asks Sherlyn why did she come. She doesn’t want to waste her time. She asks Sherlyn to come to the point. Sherlyn fills her ears against Preeta, who is careless and has lost Akshay’s phone. She tells that Preeta has lost the evidence which could have brought Karan home. Pammi gets angered on Preeta.

She rebukes Preeta for losing Akshay’s phone. She questions Preeta’s intentions about freeing Karan. Preeta knows Pammi loves Karan a lot and that’s why she is angry. She apologizes to Pammi and calms her down. She tells Pammi that she will bring Karan home at any cost. Rakhi, Mahesh and Kritika get involved in the scene to pacify Pammi. Mahesh gets upset with Pammi’s outrageous behavior.

Rakhi asks Pammi not to unnecessarily drag the matter. She tells that they trust Preeta, who would never let Karan fall into any trouble. Prithvi and Sherlyn get glad to make Pammi their new weapon against Preeta. They had used Pammi’s anger to create a drama in Luthra family. Sherlyn tells that Pammi got instigated easily. Pammi asks Preeta about Akshay’s phone. She blames Preeta further about losing the phone. Sameer fails to tolerate the constant accusations. He blurts out the truth that Preeta didn’t lose Akshay’s phone.

Preeta and Kritika get worried when Sameer reveals the truth. They don’t want Sameer to alert the resident evil trio Mahira, Prithvi and Sherlyn. Prithvi and Sherlyn hear Sameer’s confession and get worried once again that their affair truth will be known to Luthras. They didn’t expect Preeta to fool them again. Later, Preeta visits Karan in the jail to share her findings. She tells him about the theft attempt for Akshay’s phone, the trail of footprints left by the culprit ending at Mahira’s room. She suspects that Mahira had killed Akshay.

Karan refuses to believe that Mahira could be behind the murder, since she can never put him behind bars. He tells that Mahira is obsessed with him, she can do anything to send Preeta away, but will never make him distant. His trust towards Mahira upsets Preeta a lot. He asks Preeta to understand that she is thinking in a wrong direction, the killer is someone else. Preeta wants to believe Karan. What will Preeta do next? Will Mahesh arrange Karan’s bail and get him home? Comment your views. Keep reading.

Reviewed Rating for Kundali Bhagya 29th May 2021 Written Update Preeta blamed: 4/5 This rating is solely based on the opinion of the writer. You may post your own take on the show in the comment section below.