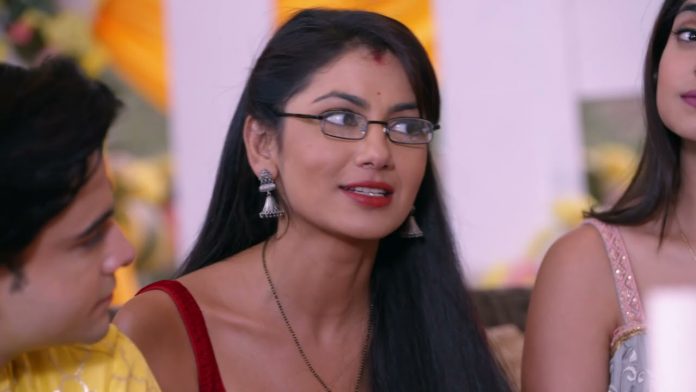 Kumkum Bhagya 2nd June 2021 Written Update Mehendi twist Abhi is anxious about the mehendi ceremony. He wants to find some way to get rid of Tanu. Pragya tries to pacify him and calm him down. Tanu gets disturbed when she gets blank calls. She wants to know who is calling her to threaten her. Its actually her assistant Somdutt whom she trusts a lot. Somdutt is threatening her for money, knowing she is fooling around and not going to pay him anything. He wants to get money from her.

Rhea gets angered hearing Prachi talk about Ranbir. Rhea wants to know what’s going on Prachi’s mind. Shahana asks Prachi to respect Ranbir’s love. Prachi decides to let go Ranbir for Rhea’s sake. She wants to keep her promise to Rhea. Shahana asks her to keep the heart of Ranbir and wear the colour of his choice. Prachi disagrees. She selects a dress to wear at the mehendi ceremony. Shahana tells that Ranbir will like her in that outfit as well. Rhea gets upset to see Shahana pushing Prachi towards Ranbir.

Shahana asks Prachi about the bathroom incident, where Prachi got locked along with Ranbir. Prachi narrates the entire incident to her. After Rhea, Prachi’s conversation gets heard by Aaliya, who assumes that Prachi is still after Ranbir. She decides to not tell anything to Rhea about this incident, so that Rhea doesn’t feel hurt because of Ranbir. She keeps it to herself.

She meets Rhea and promises her that she will always love her, and will always be there for her. She loves Rhea dearly and hates Prachi. She finds Prachi a mirror image of Pragya, and can’t accept her. She sees herself in Rhea, and thinks even Rhea’s situation is same like her, since she never got Purab’s love. She knows that Ranbir will never love Rhea, since he loves Prachi. She feels terrible for Rhea. She doesn’t want Rhea’s fate to be unlucky like her in love. She shares her feelings with Mitali.

On the other hand, Abhi asks Pragya to help him get ready. He asks her to just fix the broach. Pragya does it with love, while Tanu insists that she will do it. Pragya asks Abhi to act in front of Tanu. He gets upset seeing Pragya distancing herself. He finds a way to leave Pragya jealous.

He acts lovey-dovey with Tanu deliberately. The family decides to play Antakshari during the mehendi ceremony. Rhea learns about Ranbir and Prachi’s bathroom incident. She gets enraged to plan something. She enters Prachi’s room and ruin Prachi’s mehendi outfit. She takes a scissor to cut the outfit. She doesn’t want Prachi to look appealing to Ranbir.

Tanu selects her team for playing antakshari. She chooses Rhea, Mitali, Aaliya and Abhi. Abhi gets bored by the dragging function. Tanu tells that Aryan, Ranbir, Prachi and Shahana will be in Pragya’s team. Pragya tells Tanu that her team will win any how, the team members doesn’t matter. Tanu asks Somdutt to rob anything in Mehra house, whatever he gets will be his fees paid by her. She adds that she won’t be giving him anything later on then, he shouldn’t trouble her for money. She threatens her. She sends him to rob the jewellery from the safe. Rhea happens to come to that house at the same instant. Will Rhea know about the robbery? Keep reading.

Reviewed Rating for Kumkum Bhagya 2nd June 2021 Written Update Mehendi twist: 3/5 This rating is solely based on the opinion of the writer. You may post your own take on the show in the comment section below.