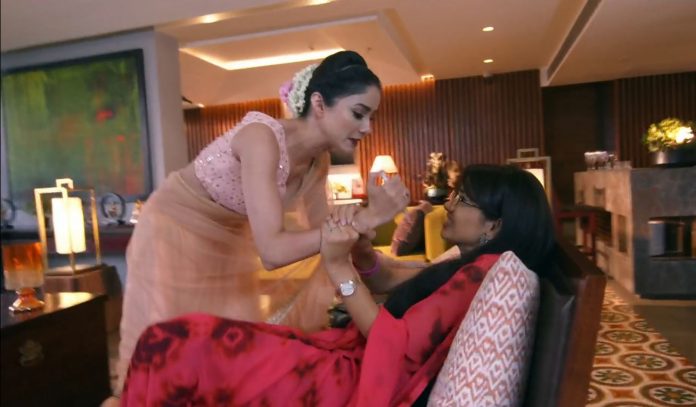 Kumkum Bhagya Pragya final move 11th June 2021 Update Tanu and Pragya get into a heated argument, which soon turns into a scuffle. Tanu realizes that Pragya is going to inject her some drug, and learns that its the truth serum. She wonders how Pragya got so daring. She insults Pragya. She knows that Pragya is dying inside to see her husband marrying someone else. She wants Pragya to get lost. Pragya doesn’t leave, since her plan is something else. Tanu keeps an eye on her.

Pragya plants the mobile phone to record Tanu’s crimes confession. Tanu confronts her about the syringe. Pragya tries hiding it from Tanu, but fails. Tanu thinks that Pragya had got the poison to inject her and kill her. She is happy seeing Pragya’s anger and jealousy. She tells that Abhi will fall in love with her soon. Pragya tells that Tanu has still lost because she is greedy, she has no love for Abhi. She is certain that Abhi and Tanu have no future together. Pragya engages Tanu in the talks and further instigates her.

She tells that Abhi never saw love in Tanu’s heart, he never wanted to marry her. Tanu snatches the syringe from Pragya and aims to inject the truth serum to her. Pragya fights Tanu to stop this from happening. She struggles a lot but finally manages to inject the truth serum to Tanu. Tanu gets frightened that she will be speaking out the entire truth now. She doesn’t want Pragya to take an advantage of her confession. Pragya thinks its the final moment when Tanu’s truth will be exposed.

Pragya provokes Tanu to confess her plan. Tanu gets instigated by Pragya and confesses that she had falsely accused Abhi. Pragya gets the confession recorded in her phone. Tanu tries to inject Pragya, but ends up getting injected with the truth serum. Pragya quickly records her confession and checks her phone to be sure of the evidence. She leaves from Tanu’s house, while Tanu falls unconscious. Pragya informs Abhi the good news, that she had obtained Tanu’s confession with much difficulty. Abhi can’t believe that she has done it. He jumps and dances with joy.

Pragya informs Aaliya that she will pose as Tanu and marry Abhi in the mandap when the judge comes to attend the marriage function. She tells her plan to Aaliya. She tells that this way the judge won’t know the truth until the marriage completes, and Abhi will get saved from Tanu’s false accusations as well. Aaliya likes her plan. She tells that she will send someone to make sure that Tanu doesn’t come back. She also wants to get rid of Singhania, before he gets suspicious about their plan. On the other hand, Rhea gets worried that Ranbir is still after Prachi.

Ranbir really wants to stop his marriage with Rhea. He packs his bags to leave. Aryan learns Ranbir’s escape plan. Ranbir comes across Pradeep, who is found drunk on the roadside. He tries hard to convince Pradeep to come with him to meet the Mehras and also tell Tanu’s truth to the judge. He wants to save Abhi from the mess. Abhi gets ready for the marriage, and takes his daughters’ help. The judge calls Aaliya to inform that he won’t be coming, he would be attending the marriage through a video call.

Aaliya doesn’t have any problem with that. Ranbir informs Abhi that he found a drunk Pradeep. Abhi asks him to bring Pradeep in front of them. Pragya reaches home with excitement of marrying Abhi. She prays that things go as per her plan, and nothing goes wrong.

Reviewed Rating for Kumkum Bhagya Pragya final move 11th June 2021 Update: 5/5 This rating is solely based on the opinion of the writer. You may post your own take on the show in the comment section below.

Mukund decides to leave the house. Meera angrily stops him at the price of the truth. He demands the truth. She tells him the bitter truth that her elder sister wants to break their marriage. She also reveals that Akki is pregnant. She adds that this is the reason that Adi is staying back with Adi.

She tells him that Navya’s issue has also come up at the same time. She breaks down when she fails to handle the things alone. She feels Devika was right, that she won’t be able to handle her marriage. Mukund is shocked to know about Akki’s pregnancy. He rages at Meera for supporting Adi. He tells her that she has proved once again that she can never be like Renuka. Meera asks him to stop comparing her with Renuka. She is fed up hearing him chant Renuka’s name. She doesn’t want to lose her identity. She tries to make Mukund realize his mistake.