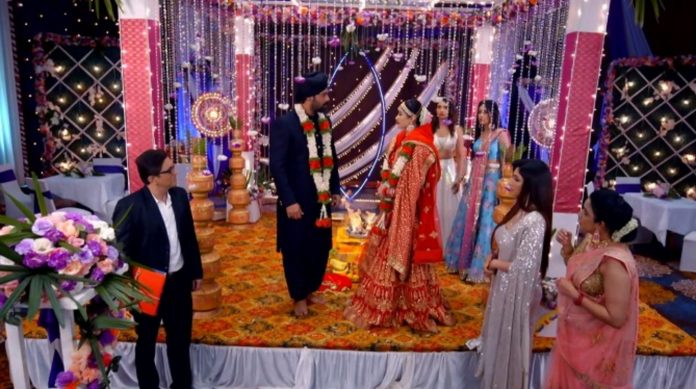 Kumkum Bhagya 12th June 2021 Written Update Major twist Abhi goes to greet the judge on the video call, and presents himself positively willing for the wedding. Ranbir soon arrives at the farmhouse with Pradeep. Pragya asks him to sober up Pradeep so that he could give his statement to the judge against Tanu. She asks him to bring Pradeep in front of the judge once he is ready to give his statement. Aaliya tells Pragya and Ranbir that they can deal with Pradeep later, but at present, they should focus on Abhi and Pragya’s wedding.

She goes to handle Tanu, who is unconscious after getting the truth serum injected. Singhania soon arrives at Tanu’s house and smells something fishy. Seeing the signs of the scuffle, he finds something wrong. He finds the syringe there. He realizes that Tanu is in problem. Pragya gets decked up as Abhi’s bride. She gets excited for the wedding. Aaliya and Rhea tie up Tanu and lock her up in the cupboard. They don’t want her to come out until the wedding completes.

After a while, the family sees the bride arriving in the mandap. Abhi asks the pandit to begin the wedding ceremony, being confident that Pragya is the bride. Singhania reaches there and gets more suspicious seeing the family’s happiness. He asks them to show the bride’s face. He wants to confirm that the bride is Tanu. Aaliya handles the situation and distracts Singhania before the judge. She doesn’t want Abhi’s plan to get revealed until the marriage completes.

Abhi out of happiness lifts the bride’s veil. He is shocked to see Tanu’s face under the veil. Abhi wonders how did this happen. Aaliya has joined hands with Tanu once again for the sake of Abhi’s property shares, which Tanu promised to give her once she marries Abhi. Aaliya cheats Abhi once again for the sake of money, when she claims that she loves him and cares for his happiness. She betrays Pragya as well. She has made Pragya fall unconscious and locked her in Tanu’s pace. Abhi rushes to find Pragya. He soon learns that Pragya had been lying unconscious due to someone’s attack. Abhi realizes that Pragya’s plan has failed miserably.

He loses his cool and starts blaming Pragya for the master plan. He tells Pragya that he can’t be married to Tanu. He feels cheated by his own family. Pragya tries hard to calm down Abhi. She begs Pradeep to reveal Tanu’s truth in front of the judge and save Abhi and her marriage. What will be Pradeep’s decision? Will he accept Pragya’s request? Keep reading. Comment of the latest twist of Abhi and Tanu’s marriage.

Reviewed Rating for Kumkum Bhagya 12th June 2021 Written Update Major twist: 2/5 This rating is solely based on the opinion of the writer. You may post your own take on the show in the comment section below.