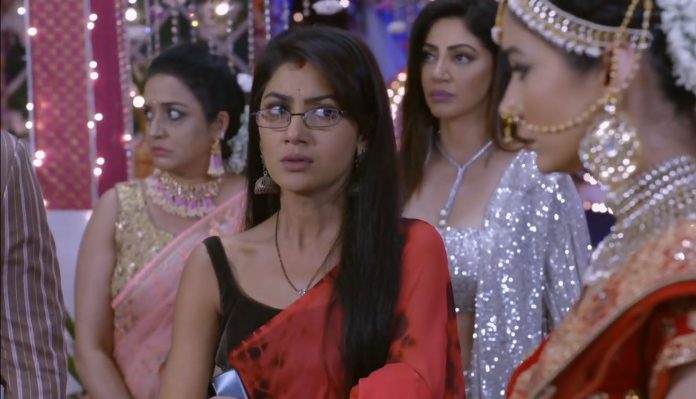 Kumkum Bhagya 14th June 2021 Written Update Finale bet Aaliya fools Rhea about Abhi and Pragya’s marriage. Abhi marries Tanu with all the rituals, unaware that she is Tanu, not Pragya. He gets too happy on the marriage completion, but the happiness turns into a shock on seeing Tanu’s face. Tanu feels she has finally won over Pragya’s love. Tanu, Aaliya and Mitali cooked up this twist of bride-swapping just in time to ruin Abhi and Pragya’s love story. Aaliya gives Abhi to Tanu, to get his property in return. Mitali also joins the evil team to stay in their good books. She poses no threat to them.

Abhi refuses to accept the marriage. He throws the garlands away. He asks Aaliya how did Tanu come in the mandap instead Pragya. Aaliya tells that she has no idea. He tells that he trusted her, and she cheated him once again. Prachi and Rhea get a bitter shock. Rhea wonders how did Tanu come by replacing Pragya. Pragya gains consciousness with difficulty. Abhi asks her what was she doing in the room, when he was awaiting her in the mandap. She still hopes for their marriage. He cries out his pain when he reveals that he got married to Tanu in front of the judge.

He feels silly that he didn’t check his bride’s face before marriage. Pragya tells him that someone entered her room and rendered her unconscious. He tells that Tanu has won, he was afraid for this. He knows that Tanu will ruin his life. He doesn’t think he can handle anything. He is much upset that his life got ruined, they have failed themselves together. Pragya doesn’t want to lose. She tells him that she will still keep her promise and save him from Tanu.

She tries to get help from Pradeep. She meets Pradeep to reveal that Tanu got married to Abhi. Ranbir can’t believe this. She begs Pradeep to tell the truth to the judge. She tells him that Tanu is his wife, she is cheating him by marrying Abhi. She expects him to be a nice man. Pradeep accepts her request and reaches the mandap to tell the truth to the judge.

Tanu asks the judge not to believe anyone, they are just trying to malign her name. She asks Pradeep why is he lying that he is her husband. Pragya asks Tanu not to threaten or scare Pradeep in front of them. She tells the judge that Tanu is threatening Pradeep, her husband with an aim to hide her first marriage. She adds that Tanu’s marriage with Abhi is not valid, since Tanu is already married to Pradeep.

Tanu asks Pradeep to tell the judge that he isn’t her husband. Tanu asks the judge not to give any chance to Pradeep and make fun of her. She tells that she is happy to get justice and doesn’t want to lose everything back again. Pragya asks the judge to listen to Pradeep once. The judge asks Pradeep if he knows Tanu. Pradeep tells the judge that he knows Tanu well, she has cheated him. He doesn’t reveal about their marriage. Will Pradeep fail Pragya’s expectations? Comment below and keep reading.

Pragya asks Pradeep to come with them. Sjhe doesn’t find anyone in the mandap area. She calls the family members. Pradeep gets dizzy. He makes an excuse to go to the bathroom, but Ranbir accompanies him. Ranbir doesn’t want Pradeep to run away. Aaliya fakes her concern seeing Pragya. Pragya tells her that they can still find out some way to deal with Tanu. She wants to expose Tanu’s truth. Rhea and Prachi run to arrange the video call with the judge. Pragya sees Tanu as Abhi’s bride. She reprimands Tanu for the big lie.

Tanu tells them that Pragya had lied, she had planned to marry Abhi secretly. Abhi tells Tanu that he knew Pragya was going to marry her, but Tanu cheated them. Tanu tells them that Abhi is getting freed from the case because of her. She asks the family not to support Abhi. She gives them a last chance. She tells that she will not spare Abhi if they go against her. She promises Rhea that she will become a good mother for her. Pragya tells that she is Rhea’s mother, and she is very much alive. Tanu blames Pragya for not thinking of Rhea.

She tells that Pragya just thinks of Prachi, she is useless for Rhea. She takes responsibility of Rhea. Abhi and Pragya ask Tanu to stay away. She accuses Pragya for always wishing bad for the family. Aaliya lies that she isn’t able to call the judge. Pragya stops Tanu from going anywhere. She tells that she will resolve the marriage and not let Tanu defeat their true love. Pragya connects to the judge and asks him the motive of the marriage.

Judge tells that the marriage happened to give justice to Tanu. Pragya tells the judge that Tanu isn’t a victim. He tells her that if Tanu isn’t innocent, then she won’t get any justice. Pragya tells him that she has a video proof against Tanu, where she confesses that Abhi is innocent. She shows the video proof, but fails to prove anything. She tells the judge that she isn’t lying, she is trying to prove out the truth. Judge rebukes Pragya for making the marriage a joke. He asks Abhi and Tanu to save their marriage.

Aaliya is relieved that Tanu has handled Pradeep. Pradeep’s statement shocks Abhi and Pragya. Pragya asks Pradeep the reason that he is related with Tanu. Pradeep lies to them that Tanu is actually his brother’s wife, but his brother is no more. She shows the evidences to show the truth. She admits that she was married before, but now she is Abhi’s wife. Pradeep apologizes to Tanu for the trouble. Judge warns Abhi to look after Tanu and not pose any problems for her. Tanu goes away to take some rest. Pragya loses in the finale bet sadly.

Reviewed Rating for Kumkum Bhagya 14th June 2021 Written Update Finale bet: 5/5 This rating is solely based on the opinion of the writer. You may post your own take on the show in the comment section below.