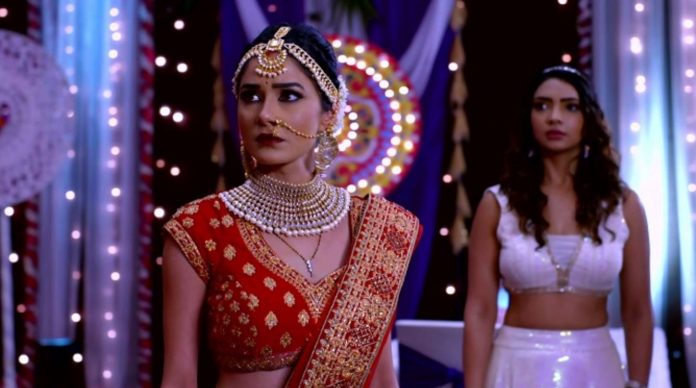 Kumkum Bhagya 15th June 2021 Written Update Madness begins Pragya apologizes to Abhi. He rebukes her for getting him married to Tanu by planning this marriage drama. He feels he got fooled because of her, she got him married to someone else. He realizes that he made a big mistake to listen to her. Pragya regrets her failed plans. He angrily asks her to tell what they can do now. She tells him that he has to tolerate Tanu until Rhea and Ranbir get married. She promises to throw out Tanu from his life. She wants him to trust her for the last time.

Prachi consoles Pragya. Pallavi meets Abhi to congratulate him on his marriage with Pragya. She talks about Ranbir and Rhea’s marriage. Abhi tells Pallavi that he isn’t able to think of Rhea’s marriage right now, because he got married to Tanu. Pallavi is shocked as well. Pragya gets inconsolable. Rhea tells Pragya that Pallavi has come to talk about the marriage. Pragya tells Rhea that she will get her married to Ranbir. She promises Rhea.

Tanu tells Pallavi that she will get Ranbir and Rhea married. Pallavi sympathizes with Pragya, while Tanu tries to take Pragya’s place in their lives. Tanu and Pragya get against each other. Pragya tells Tanu that she won’t leave until her daughter gets married. Tanu commands her to leave. Rhea takes a stand for her mother. Pragya stresses about Abhi going out to spend alone time. Keep reading for the detailed update. Comment your views below on the current track of Abhi and Pragya’s messed up marriage drama.

Tanu tells Abhi that she wants to start fresh, he should be happy to make a new start. He tells her that he has always told her that she can never replace Pragya in his life. He tells that she will never win his love. He adds that Pragya is the woman he has always loved and will always love in future. Same way, Ranbir pleads a lot in front of Pallavi to get her permission to marry Prachi, whom he madly loves. He tells her that he won’t be succeeding to marry Rhea, he will fail in his own eyes if he marries Rhea.

Pallavi tells Ranbir that she isn’t his enemy, she wants his happiness too. She tells him that she will allow him to marry Prachi only and only if Prachi comes with a wish to marry him. She tells that she knows that Prachi has broken their relation, and now she isn’t willing to marry her. She adds that he has to first convince Prachi and then see if Prachi is willing to marry him. Ranbir gets positive that Pallavi has finally given up the permission to marry his love. He gets hopeful that he can convince Prachi.

Ranbir goes to meet Prachi to know her decision. He tries hard to convince her to marry him. He tells her that Pallavi has no problem with their marriage, even Rhea will understand them. He asks Prachi to just think of their future together, because he knows the fact that she loves him too. Prachi doesn’t accept his plea. She rudely refuses to his proposal. She breaks his heart once again. She is also heartbroken but hides her feelings. Ranbir gets dejected.

On the other hand, Aaliya and Mitali don’t want Abhi to suspect them. They play a drama in front of them and blame each other for Tanu’s victorious move. Abhi stops them from blaming themselves and consoles them. He tells that he feels guilty for his stupidity to believe Pragya and then hurt her by accusing her. He tells that he has been wrong to blame Pragya. He apologizes to Pragya. Abhi and Pragya plan to make Rhea’s marriage a memorable one. He tells that they have to delay Tanu’s matter until Rhea and Ranbir get married. Abhi also wants to make Rhea’s marriage a good success.

Meanwhile, Tanu troubles Abhi by asking for wife’s rights. She tells that she wants Pragya to get away from their lives. Abhi asks Tanu to know her real place and also the limits. Tanu commands Pragya to leave their room. Abhi gets stressed with Tanu’s evil move. Pragya finds out how Tanu has made the winning move. She goes to confront Aaliya. She tells Aaliya that she will expose her evil plan to Abhi and make him throw Aaliya and Mitali out of the house. She threatens Aaliya. Luckily, Rhea asks Pragya to not get affected by Tanu’s taunts. She wants Pragya to just ignore Tanu.

Reviewed Rating for Kumkum Bhagya 15th June 2021 Written Update Madness begins: 5/5 This rating is solely based on the opinion of the writer. You may post your own take on the show in the comment section below.