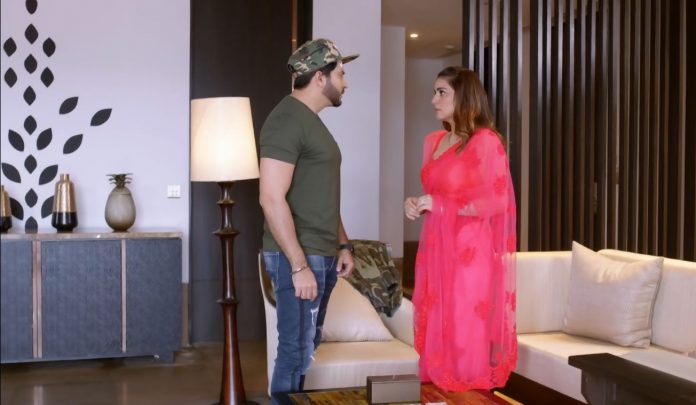 Kundali Bhagya 15th June 2021 Written Update Real twists Deepali welcomes Prithvi home. She wants to tell about Sherlyn waiting for him. Kritika is shocked to hear his voice and then see him at the door. Kritika confronts Prithvi. He asks him if he is Sherlyn’s husband, the way he has introduced himself to Deepali. Prithvi is much worried to see her. He didn’t expect to see Kritika at Deepali’s house. Meanwhile, Rakhi knows that Karan is planning something like surrendering to the police. She hinders his plan of leaving the family.

She tells him that he should just rest in his room, he shouldn’t call anyone. She calls up Shrishti to keep an eye on Karan. She locks up Karan in his room. Preeta tells that she wants to stay with Karan, but Rakhi doesn’t want Preeta to support Karan in his plan. Shrishti and Rakhi leave them to spend some alone time. Shrishti teases Karan and asks him to find a chance to romance with Preeta. Karan knows Shrishti’s naughty hints. Preeta gets shy. Rakhi hugs Shrishti and thanks her for taking extra efforts in saving Karan. She is glad that her son is in front of her eyes. Sherlyn learns that Prithvi has arrived.

Deepali tells that Sherlyn’s husband is waiting downstairs. She adds that her friend Kritika is also downstairs. Sherlyn can’t believe that Kritika has seen Prithvi. She realizes that Prithvi will be badly stuck this time. Karan gets too emotional when he speaks to Preeta. He recalls Rishabh’s advice, that’s to surrender to the police without thinking of the family’s emotions. He doesn’t want his family to fall in trouble because of him.

He asks Preeta if she liked him from the day she met him. He then emotionally blackmails her. She tells him that she loves him, she feels for him, since the beginning of their relation. She further breaks the truth to him that Mahira isn’t Akshay’s killer, the real killer is Sherlyn. He asks her what does she mean. The truth gets unbelievable for him. Karan is moved on hearing this truth. He asks her if she is sure. Preeta tells him that she will soon find evidence against Sherlyn. Kritika keeps asking Prithvi about his relation with Sherlyn, why he had come to Deepali’s house. She can’t accept the coincidence.

Prithvi tells her that he had come just to surprise her. Deepali soon tells Kritika that Prithvi isn’t Sherlyn’s husband, it was just a misunderstanding. Prithvi fools Kritika by his droopy face and silly stories. He acts upset to make Kritika feel guilty for suspecting him. He asks her to come home on her own. He leaves from Deepali’s house. Sherlyn meets Kritika. She pretends to ask Deepali about Prithvi. Later, Pammi and Shrishti stop Mahira from entering Karan’s room. Mahira gets restless to meet Karan once, but Shrishti hinders her. Pammi lies to Mahira about her dad’s arrival. Mahira gets too frightened. Her reaction leaves Shrishti shocked.

Sherlyn and Prithvi plan to get Karan arrested again. She tells that they shall inform the police that Karan is hiding in the house. He tells that he will send Karan back to the jail. Sherlyn meets Karan, Preeta and their supporters.

She acts surprised to see Karan. She asks Karan if he got a clean chit, if the police have released him. Karan replies to her in a threatening way. He adds that police released him, knowing the real killer isn’t him. He tells her that police is coming to arrest the real culprit, who is also a member of the Luthra family. He then accuses her for killing Akshay. She gets scared when he tells her that she will be going with the police now. What will Sherlyn do in desperation? Keep reading.

Reviewed Rating for Kundali Bhagya 15th June 2021 Written Update Real twists: 5/5 This rating is solely based on the opinion of the writer. You may post your own take on the show in the comment section below.