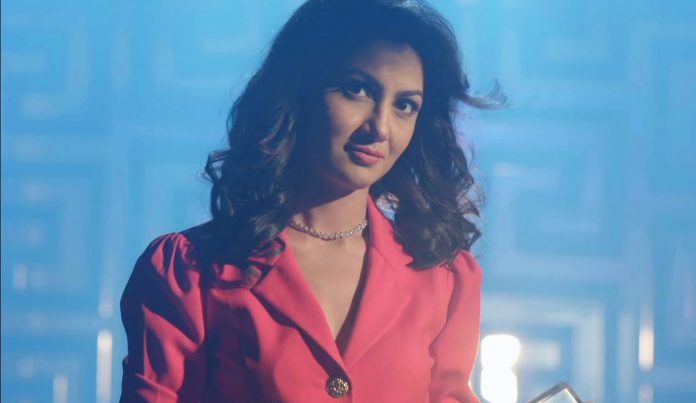 Kumkum Bhagya 18th June 2021 Written Update Separation Tanu tells Rhea that Pragya doesn’t love her. She wants Rhea to see the proof herself. She shows Prachi and Ranbir’s marriage video, where Pragya is seen blessing them with all the support. Abhi returns home to find Rhea shattered. Rhea doesn’t find it acceptable. She questions him if Prachi and Pragya love her truly or not. She tells him that they have snatched Ranbir from her. Abhi doesn’t think Pragya can do this.

Rhea tells him that Pragya was supporting the couple. He tries to clear her misunderstanding that he had sent Pragya to stop the marriage. Rhea tells him that he shouldn’t defend Pragya all the time. She feels Prachi stole Ranbir and Pragya stole Abhi from her. She runs to end her life. Abhi and the family follow Rhea to stop her from committing the suicide. Abhi loses Rhea when she jumps down the terrace, right in front of her.

Rhea faces a tragic end to her love story. Abhi finds Rhea unconscious and rushes her to get the medical aid. Tanu doesn’t care for Rhea. She knows that Ranbir and Prachi’s marriage will break Abhi and Pragya’s love story. Tanu tells Abhi that Pragya just loved Prachi, not Rhea. She shows the proof to Abhi as well. Abhi is shocked to see Pragya blessing Ranbir and Prachi. Tanu feels it was too easy to manipulate Abhi. Ranbir and Prachi get married.

Pragya hugs them happily. Their happiness ends when Abhi reaches the temple. Abhi slaps Ranbir to punish him for cheating Rhea. He asks Ranbir why did he break his trust. He bashes up Ranbir, until Pragya comes in between. Pragya explains that Rhea isn’t her daughter. Abhi gets heartbroken. He doesn’t listen to Pragya. He feels Pragya just loves Prachi. He regrets that he didn’t listen to Tanu and Rhea before. He feels Pragya is against everybody related to him. Ranbir tries to explain. Abhi asks Pragya why didn’t she stop the marriage.

He accuses Pragya for always being a cheat and curse for him and his family. He doesn’t want Pragya in his life. He adds that he will never forgive her. Tanu asks Abhi to come home, Rhea’s state is critical. Abhi ends his relations with Pragya and also Prachi. He gets one-sided mentally and just thinks of Rhea, without considering to listen to Pragya even once. He declares his decision to end ties with Pragya before making a leave.

He tells that Tanu will be becoming Rhea’s mom now. Pragya fails to stop him and lies there in pain. Prachi breaks down watching the upsetting shocking drama. She feels she was afraid for this. She regrets her marriage. Pragya asks her not to worry for Abhi’s anger. She suffers alone. Is this the end of Abhi and Pragya?

Abhi returns to Rhea and cries for her. Tanu gets the video of Abhi bashing up Ranbir and breaking his ties with Pragya. Pradeep sends her the recording, which makes her too joyed. Abhi regrets that he never believed Rhea and her insecurities. Pragya asks Prachi to take care until she goes and meets Abhi. She calls up Abhi, but he refuses to talk. He hates Pragya for going against his word and cheating him. He regrets that he trusted Pragya, he failed to get Ranbir for Rhea.

He doesn’t want anyone to come to Rhea, since Pragya has hurt Rhea a lot. He tells Tanu that Pragya has no place in his life and family. He wants Rhea to be with him as his only family. Tanu and Aaliya get happy that Pragya won’t come in Abhi’s life ever again. They are confident that Abhi won’t forgive Pragya. Tanu answers Pragya’s call. She asks Pragya to get away. Pragya tells that Abhi doesn’t accept his marriage with Tanu. Tanu tells that she is Abhi’s wife, she shall see if Abhi wants to talk to Pragya.

She asks Abhi to speak to Pragya once. Pragya begs Abhi to listen to her once, Ranbir loves Prachi, not Rhea. She adds that Rhea had asked Prachi to sacrifice her love. Abhi doesn’t believe Pragya. He is fed up of Pragya’s lies. He asks her to not come back home. He declares that Pragya is dead for him, she isn’t his family now. He hates her a lot. She tells that she is coming home to explain him the situation. He threatens to perform her Shraddh if she dares to face him.

She tells him that she will not leave him even if he tells her. He tells her that she is really unlucky for him, she should just die before coming back to him. He reveals that he has braked her car brakes to kill her. Pragya asks how can he cheat her. Tanu tells Pragya that she asked Abhi to make her rid of her forever. She adds that Abhi has kept her wish and decided to bid adieu to Pragya forever. She is glad that Abhi is following her instructions.

Aaliya asks Pragya to die and not come back to trouble them, even in their dreams. They ask Pragya to die, and mentally break her down. Pragya can’t believe that Abhi wants her to die. Tanu and Aaliya take Pradeep’s help to cheat Pragya. Pradeep spoke to Pragya as Abhi on the phone call to break her heart and make her away forever. Pragya sheds tears and thinks of Abhi. After a while, Pragya easily believes that Abhi could fail the car brakes to kill her. She feels he really cheated her. The evil trio get glad to hear Pragya’s scream on the phone call. They realize that Pragya is dead. A lady performs a puja for her daughter’s soul peace. She is hopeful to get her daughter back or a reason to live again. She finds Pragya in the river.

She realizes that she got a reason to live, Pragya has come in her life as her daughter. She saves Pragya’s life. Pragya gets a new life as the rich lady’s daughter. The track takes a leap of two years. Pragya has shifted to Australia to earn a big name in the business world. She wins the award to surprise the lady. Comment your views and keep reading for more updates.

Reviewed Rating for Kumkum Bhagya 18th June 2021 Written Update New track: 1/5 This rating is solely based on the opinion of the writer. You may post your own take on the show in the comment section below.