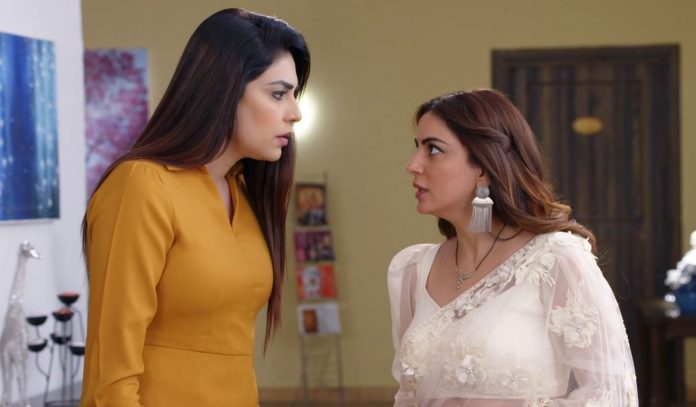 Kundali Bhagya 22nd June 2021 Written Update New twist Preeta explains Shrishti that she has got her answers, when she was feeling hopeless. She tells her that she remembers a road accident, where she came to know about the police investigation process. She feels that maybe someone has seen Sherlyn at the hotel on the day of Akshay’s murder, they shall ask the staff about Sherlyn and find out. Shrishti agrees. Sherlyn meets Megha in the same room where Akshay was killed. Megha asks Sherlyn why did she call her in the same room of the hotel. Sherlyn threatens Megha’s life.

She snatches the evidences from Megha. She feels she is safe now, nobody can find out her truth, even if Preeta cries in her struggles, Preeta can never prove Karan innocent. Preeta asks the hotel staff about Sherlyn. She shows Sherlyn’s picture in her phone to find out if anyone from the hotel staff has seen her on the day when Akshay was murdered. The staff person doesn’t know Sherlyn and fails to give a positive reply. Preeta doesn’t lose hope and goes to ask the other staff.

She proceeds to find the evidences against Sherlyn. Preeta manages to get an entry in Akshay’s room, but gets too late, since by that time, Sherlyn leaves from there and even Megha gets missing. Preeta doesn’t find Sherlyn in the middle of the crime scene. She checks the room well to look for a possible hint. Preeta and Shrishti get Sherlyn’s pregnancy report in Akshay’s room. Sherlyn tells Prithvi that they both are safe now, unaware that Preeta is still connecting the dots to find the truth. Keep reading for a detailed update.

Sherlyn meets Megha in the hotel room, where Akshay got killed by the former’s hands. Preeta is also around to interrogate the hotel staff and also look for valid evidences that could work in Karan’s favor during the court hearing. Preeta learns from the hotel staff that someone has booked the same room where Akshay was killed. She suspects that either Megha or Akshay’s known person is present there.

Sherlyn asks Megha to take the money, but not act smart to carry the evidences back. She asks Megha to destroy all the evidences in front of her. When Megha refuses to her, Sherlyn threatens of killing her. Megha doesn’t get scared of her. They both get into a heated argument. Meanwhile, Preeta tries hard to get at least one person from the hotel staff who had seen Sherlyn at the hotel that day.

She asks the staff about Sherlyn, but the staff denies of seeing Sherlyn before. Preeta skips to check the hotel room, and tells Shrishti that they shall go to Akshay’s house to find the evidences. Preeta and Shrishti reach the house and barge in. They check Akshay’s room thoroughly this time. They come across some medical reports. Preeta checks it well and realizes that its Sherlyn’s pregnancy report. She shows the reports to Shrishti. They realize that Akshay had sent that letter to blackmail Sherlyn, he knew some secret regarding Sherlyn’s pregnancy, which she didn’t wish to come out.

Megha is still at the hotel, busy in an argument with Sherlyn. She tells Sherlyn that she doesn’t have any video footage with her. Sherlyn believes her that there is no evidence against Prithvi and her. She returns home only to find Prithvi insulting her. She catches him to strangulate, but he calms her down. She is upset that he went on a date with Kritika. He tells her that he just loves her.

She tells him about her meeting with Megha. She adds that she had an argument with Megha, but taught her a lesson by a threatening move. He is shocked to know that Sherlyn had carried a gun to threaten Megha. She asks him to celebrate their victory, since they are totally safe now. She feels Preeta can never find any evidence against her. Preeta gets hopeful that she will be freeing Karan from the jail. She informs Rakhi and Mahesh that she knows the real culprit.

Reviewed Rating for Kundali Bhagya 22nd June 2021 Written Update New Twist: 3/5 This rating is solely based on the opinion of the writer. You may post your own take on the show in the comment section below.