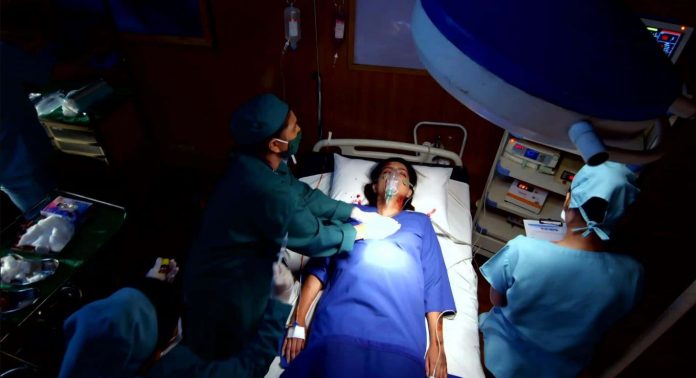 Kundali Bhagya 9th July 2021 Written Update Critical twist With Mahira’s wrong timing, Sherlyn meets with an accident. Mahira was trying to be sure that Preeta dies. She didn’t know that she will accidentally push Sherlyn. Luckily, Preeta gets saved this time from danger and accusations as well. Sherlyn’s shocking accident shakes the entire family. Karan and Preeta show their humanity, despite knowing how evil Sherlyn is. They pray for her baby’s safety. Prithvi also grows worried for his child, carried by Sherlyn. He can’t tolerate the sight of Sherlyn struggling in the OT. He is helpless that he can’t go to her.

Preeta carries the details of the truck who had hit Sherlyn. Prithvi suspects Mahira’s involvement in the accident. He had seen her hiding from everyone. He wants to know if Mahira is responsible. Mahira is tensed that her mistake could get Sherlyn killed. Rishabh breaks down seeing Sherlyn. The doctors try to help Sherlyn survive. Karan tells him that he was thankfully close on that route and got Sherlyn to the hospital on time.

Prithvi wants Sherlyn to get saved. He wants the truck driver to get punished by the law. Prithvi prays for Sherlyn and his child. Doctor informs the Luthras that Sherlyn’s condition isn’t good. She asks them to pray for Sherlyn, since just prayers can get her life back. She adds that she is doing her best to save Sherlyn and the child.

Rakhi gets worried for Sherlyn more than the baby. She wants her Bahu to be safe first. Rishabh sees the doctors attempting to revive Sherlyn. Prithvi wants to see Sherlyn, but stays away in front of the family. Rakhi, Preeta, Kareena and Bani go to make prayers for Sherlyn’s safety. Do you think Sherlyn shall pay for her sins? Will this accident bring a chance in Sherlyn’s evil mindset? Will it break Sherlyn and Mahira’s friendship? Comment your views on the track. Keep reading.

Preeta confronts Prithvi for knowing about the truck driver hitting the Sherlyn. She asks him how did he know about the accident. He lies that Kritika told him about the accident, Kareena would have informed her on call. Prithvi tells that Kritika would be coming. Preeta asks him why didn’t he get Kritika along, why did he come running leaving Kritika behind. Nurse tells Rishabh that Sherlyn is critical, they have arranged the blood for her, doctors are trying their best.

Rishabh wants the doctors to save Sherlyn and the baby. Mahira regrets the accident. Prithvi learns of Sherlyn’s critical state. He calls Mahira to know the truth. He asks her how did the accident happen. Mahira lies that she is with her mom. Prithvi suspects her even more when she lies. He wants to give her a dose in his style. The family reaches the hospital. Prithvi tells them that Sherlyn is critical.

Rishabh is worried because Sherlyn is carrying his baby. He tells that Rakhi and Mahesh are awaiting the baby, their happiness and hope shouldn’t be lost. Prithvi asks Rishabh if doctor gave any update. Preeta consoles Rakhi. Doctor meets them. She ends their hope saying Sherlyn is really serious, anything could happen to her life. The family women go to pray for Sherlyn’s life. Rishabh worries for his wife, while Prithvi panics that he can’t lose his love Sherlyn. Rakhi fears that they will be getting a bad news.

Kareena pacifies Rakhi’s increasing fears. Preeta makes prayers for Sherlyn. She also senses a bad omen. Doctor tells the family that Sherlyn is safe now. Rakhi is glad that Sherlyn is safe. Doctor gives the shocking news of Sherlyn’s miscarriage. She tells them that they could just save Sherlyn, not the baby. While the Luthras are in shock of the baby’s loss, Prithvi also cries for his baby. Rakhi, Kareena and Preeta return home. Rakhi cries for the lost member, for who she had decorated a room.

Rakhi wanted to give the best to the baby. She feels she has lost Rishabh’s baby. Rakhi tells Preeta that she is finding hard to face Sherlyn. Afterwards, the family brings Sherlyn home. Sherlyn stays in grief on her huge loss. She shares her pain with Sanjana. The baby was much important for Sherlyn. She wants to talk to Prithvi to share her grief. Prithvi meets Sherlyn to share their pain of losing their unborn baby. He hugs Sherlyn, much to Sanjana’s shock. Sanjana shuts the door to protect their affair from getting known. Prithvi tells Sherlyn that he is much worried for her. Sanjana asks them to beware of Luthras.

She reprimands them for losing their senses. She hates Prithvi for ruining Sherlyn’s life. Sanjana asks Sherlyn to forget Prithvi. Sherlyn angrily takes a stand for Prithvi. She goes hyper. Prithvi calms her down. He asks Sherlyn to take rest. Prithvi tells Sherlyn that its actually good that the baby is no more, else she would have lost her sleep and peace if the baby was born. Prithvi’s statement breaks Sherlyn’s heart. Sanjana wants Sherlyn to see Prithvi’s real face. Prithvi tells Sherlyn that he didn’t mean to hurt her sentiments, but the baby was never more important than her.

Reviewed Rating for Kundali Bhagya 9th July 2021 Written Update Critical twist: 1/5 This rating is solely based on the opinion of the writer. You may post your own take on the show in the comment section below.