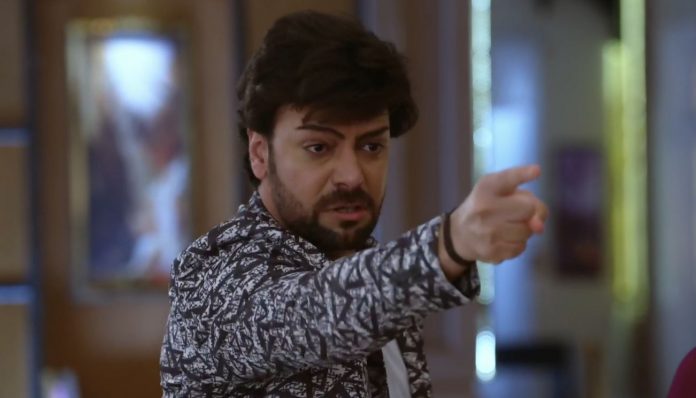 Kundali Bhagya 12th July 2021 Written Update Prithvi reveals Prithvi barges into Mahira’s room to confront her for the crime she secretly did and covered up by her disappearance. Prithvi asks Mahira where was she at the time of Sherlyn’s accident. Mahira lies to him once again that she was with Ramona at her residence. Prithvi knows that she is cleanly lying. He tells her that he knows about her whereabouts well, but wants to hear it out from her. He asks her to stop lie and just confess the crime.

He tells her that he is giving her a chance to speak, clarify and defend just because of their old terms. He wants her not to waste the chance and just speak the truth. Mahira still denies the truth that she had accidentally pushed Sherlyn, which made the latter lose her baby. Prithvi asks Mahira to admit that she was present with Sherlyn, and she is the one who is responsible for Sherlyn’s accident. He realizes that Mahira was growing jealous with Sherlyn, since the day Karan got released by Sherlyn’s help and the entire family started applauding her.

He asks her to accept her crime if she wants to get saved, if she wants Sherlyn to forgive her. He tells her that Sherlyn is mad to take revenge on the culprit who killed her baby. He scares her of Sherlyn’s anger. Mahira has really been jealous throughout seeing Sherlyn getting pampered by the family, but she didn’t push Sherlyn deliberately. She also wanted Preeta to die. She also went ahead to make sure that Preeta died under the truck, but fate had it written otherwise. Prithvi loses his cool when Mahira repeatedly denies her involvement. Mahira has to secure herself. She doesn’t want any enmity with Prithvi and Mahira.

She thinks her lie will save her, but her lie makes the matter worse. Prithvi threatens her that he will bring out her truth in front of the entire Luthra family, since she has tried to kill Sherlyn. Mahira asks him to go ahead and tell the family, remembering the fact that she also holds Sherlyn and his affair truth, along with the truth of their numerous crimes. She threatens to expose Sherlyn and his truth if he dares takes her name in front of Karan and Luthras. Prithvi and Mahira get into a heated argument.

Moreover, Prithvi creates a huge scene by gathering the Luthra family and showing his madness for Sherlyn. Mahira gets tensed that he would take her name any moment. Sanjana is also worried that Prithvi will get himself exposed while uncovering the culprit’s name. She doesn’t want any troubles for Sherlyn’s marriage. Karan and Preeta ask Prithvi to reveal the truth. They also want to know who had deliberately tried to harm Sherlyn.

Prithvi tells them that he has found the culprit who is responsible for the loss of Luthras’ heir. He tells them that they shall not spare the culprit for harming Sherlyn, who took away their happiness. Prithvi presents the culprit in front of them. Will he dare to expose Mahira, or change his word once again? Comment your views. Keep reading.

Karan tells Preeta that she wants to have a baby, for the reason that they need to complete their happiness by something they lost. He tells her that her reason isn’t right, she needs some time and can take it if she wants. She tells him that she also wants a baby herself for her own happiness, she wants a little Preeta to become Rakhi’s granddaughter and fill happiness in their lives. She tells him that even Kareena and Bani want the same that they plan a baby.

tells her that she shouldn’t get under pressure from the family. She tells him that its her decision, she wants to know if he also wants a baby. She expects him to agree. Karan hugs her. He wants her to enter their life’s new phase by her self-will. He loves Preeta dearly. They both feel love for each other. On the other hand, Mahira stays lonely. She gets terrified after Prithvi breaks inside her room. He asks her to meet Sherlyn and know her welfare like a good friend. She lies that she isn’t feeling okay.

He shuts the door to confront her. He asks Mahira if she will make a silly excuse of their school time to fool him. He questions her dare to lie to him when he called her from the hospital. He tells that she wasn’t at Ramona’s house, but at the accident site. He wants to burn the world in order for his revenge. He tells her that he is the law himself, nobody can get saved from his punishment. He asks her to go and see Sherlyn’s pain, Sherlyn has lost her baby. He accuses Mahira for killing his child.

Mahira gets scared. He tells that he can’t lessen Sherlyn’s sorrow and pain, but he can lessen her anger by punishing the culprit. Mahira has no option than to deny. He tells her that he knows the entire truth that she is responsible for Sherlyn’s accident. He gives her a last chance to accept her crime and save her future from getting ruined. He threatens to torture her every day of her life. Mahira doesn’t want to confess her crime. She fools him that she is feeling really bad for Sherlyn.

She tells that Sherlyn is responsible for her own state, Sherlyn didn’t need to hire the hitman to get Preeta killed, its Sherlyn and the hitman’s mistake. Prithvi tells her that her statement proves that she had seen the accident being present there and being the reason herself. He tells that he can spare her life if she accepts. Mahira asks him to tell anyone the truth, she doesn’t care about it. He takes her challenge. He tells her that he will tell the entire family about her crime of killing Sherlyn’s baby.

Meanwhile, Karan and Preeta meet a dejected Rakhi, who cries for the baby’s loss. Rakhi tells that they lost their happiness. He pacifies her that they can get what they lost. Rakhi asks him how will that happen. Karan gives his word that he will plan a baby to give the lost happiness to the family. He tells that Preeta and he want to become parents. Rakhi gets emotional hearing this. She blesses them. Mahira tells Prithvi that she didn’t push Sherlyn, if he dares to tell the truth to the family, then she will tell the truth that Sherlyn wanted to kill Preeta.

She also threatens to expose Prithvi’s evil motives, the secret of Akshay’s murderer. She fights Prithvi and hurts him. She tells him that she isn’t someone to get threatened by someone. She tells Prithvi that she can tell the family that the baby wasn’t a Luthra, baby wasn’t Rishabh’s child that they are crying for. Prithvi advises her to better leave the Luthra house. He warns her to stay away from Sherlyn. Mahira provokes Prithvi by her remarks. She tells that she isn’t little afraid of him.

She threatens to get Sherlyn and Prithvi ousted from the house by exposing their affair. Sarla and Shrishti meets Luthra to pacify them for the baby’s loss. She enquires about Rakhi’s health. Mahira runs to the family to reveal something crucial against Prithvi and Sherlyn. She complains of Prithvi who wants her to leave the house. Prithvi gets scared of Mahira. He interrupts Mahira from taking his name. He tells the family that Mahira her herself committed a crime, she tried to kill Sherlyn.

He tells Rishabh and Karan that Mahira is the reason behind Sherlyn’s baby loss. He accuses Mahira in front of Sarla and the Luthra family. Mahira tells that he is cleanly lying. Prithvi tells them that he can prove Mahira’s lies. He asks Rishabh to question Mahira. Rishabh questions Mahira. Shrishti realizes that Prithvi has turned against Mahira for a big reason. Yay, finally something good happening. Leave your comments on the revelation below.

Reviewed Rating for Kundali Bhagya 12th July 2021 Written Update Prithvi reveals: 4/5 This rating is solely based on the opinion of the writer. You may post your own take on the show in the comment section below.