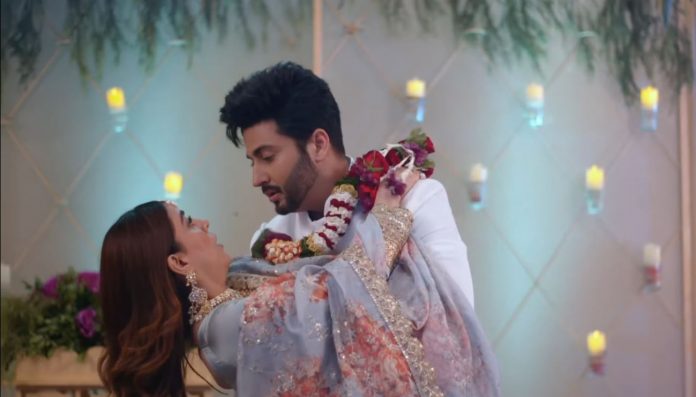 Kundali Bhagya 14th July 2021 Written Update Wedding Shrishti is glad that Mahira’s chapter is closed. She wonders how did Prithvi expose Mahira’s truth, when Mahira was in Prithvi and Sherlyn’s team. She knows that Prithvi took this step because he lost his child by Mahira’s move. She tells Preeta that Mahira has left from their house, that’s the best thing that happened. She wants Preeta to focus on her main task, they have to throw out Prithvi from the house, they must prove Prithvi and Sherlyn’s affair to save Kritika’s life.

She praises Prithvi’s game that turned him into a heroic figure. Preeta tells that they tried numerous times to expose Prithvi and Sherlyn’s truth, but they have always failed. She adds that Prithvi and Sherlyn are too cunning and can save themselves. She wants to leave the things on its own. She tells Shrishti that she couldn’t tolerate seeing Rakhi’s tears. She tells that Rakhi and entire family want their happiness by Kritika and Prithvi’s marriage. She doesn’t want to bring out the truth that ruins their happiness again.

She is scared that Kritika may take a wrong step if she dares to prove Prithvi wrong. She leaves things on fate to decide. Shrishti asks her if she will spare her enemies. Preeta tells that her family is important than her enemies, she can’t hurt her family by serving more sorrow at the time when they are already broken. She wants to see them happy and smiling. She asks Shrishti not to do anything against Prithvi and Sherlyn.

Kritika drops Sherlyn to her room. Rishabh and Karan find the entire family upset. Preeta wishes she could help them. She brings Kritika’s wedding invite. Bani invites Sarla, Janki and Sanjana in the wedding. Janki tells that its good that Mahira left the house, Preeta and Sherlyn will be safe now. Shrishti stops Janki from taking Prithvi’s name. She tells that they are happy that Prithvi and Kritika are getting married. Rishabh and Mahesh are equally sorrowful. Bani praises Prithvi for saving the family from Mahira. She feels Kritika is lucky.

Meanwhile, Karan reaches Rishabh to find him in tears. He consoles Rishabh, who tries hiding his sorrow. Rishabh loves Karan as his child. He tells that he can’t hide his real emotions from Karan. He wonders if he is a bad person what he lost such a big happiness, he lost his child, he is feeling bad for Sherlyn, but he doesn’t feel that he has lost his own child, he isn’t able to connect with the lost child, as if he isn’t good at heart. He feels strange that he has sympathy for Sherlyn, but not sorrow over the loss.

Karan tells that time will heal everything. Mahesh overhears them. He tells Rishabh that he is wrong, he would need time to get attached to someone. He adds that he had the feeling of a father when Rishabh came in his arms, he loves Rishabh a lot. He knows that Rishabh will become the best father. Rishabh thanks him for showing faith. He tells that he was feeling guilty for not feeling anything for the lost child.

Moreover, Prithvi meets Sherlyn in her room. She tells him that he proved that he truly loves her. He tells that he can give his life and kill anyone on her orders. She is very happy. He tells that he didn’t expect her to strike Mahira. He is thankful that she has considered his happiness as well, she asked the family to get him married to Kritika soon.

She has understood that their love is just for each other, they are made for each other and will not be affected by their partners. Prithvi hides when Kritika comes. Kritika feels that Sherlyn was talking to her lost child. Sherlyn tells that she was talking to her love. Prithvi makes a leave. Kritika tells that they all love the lost baby. She sympathizes with Sherlyn. She tells that she should recover from the loss.

She promises that Sherlyn will get her lost happiness back. Sherlyn just wants her true love Prithvi. She gets afraid that Prithvi may fall in love with Kritika, hearing her sweet talks. She doesn’t want to spare Kritika if she dares snatch her Prithvi. Preeta consoles Rakhi, who blames herself for Sherlyn’s loss. Rakhi feels she couldn’t become a good mother-in-law. Preeta tells that she is a mother for her Bahus. She praises Rakhi for her love and concern. Rakhi feels she should have taken good care of Sherlyn. She regrets to believe Mahira.

She tells that she knows about Mahira trying to poison Preeta and Karan’s relation, she didn’t do anything to oust her in time. She regrets that Mahira succeeded because of her permission to stay in the house. She feels Mahira has poisoned all the relations. Preeta tells Rakhi that they have to keep courage and face life. She adds that sorrowful phase shall pass. Rakhi gets encouraged. They wish that Kritika and Prithvi’s marriage happen peacefully.

Kritika cries seeing them cry. She wishes the same for her marriage. Karan and Preeta get decked up for Kritika and Prithvi’s marriage. They share a cute moment of love. Prithvi is very happy to get married and become a permanent member of the Luthra house. Shrishti doesn’t want to spare Prithvi. She plans to expose his truth. Keep reading to catch the biggest twist in the show. Comment your views on the coming twists.

Reviewed Rating for Kundali Bhagya 14th July 2021 Written Update Wedding: 3/5 This rating is solely based on the opinion of the writer. You may post your own take on the show in the comment section below.