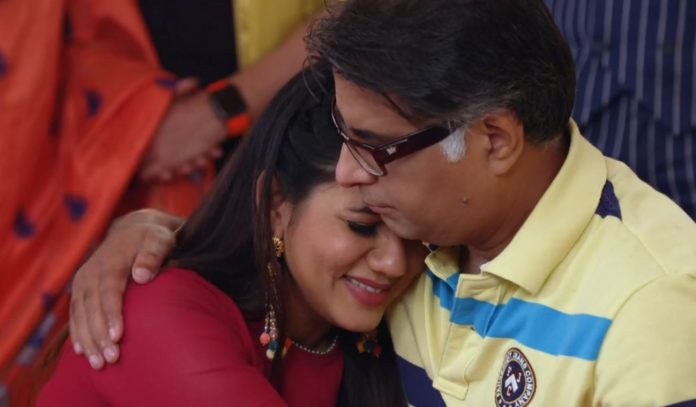 Kundali Bhagya 15th July Update Full Written Update Kritika Wedding Twist Bani finds Kritika upset on the day of her wedding. Kritika awaits Mahesh and Rakhi for the Chuda rasam. Bani tells that they have already come. Kritika gets emotional seeing them. She hugs them with much love. Kareena tells that Kritika loves them as her own parents. Kritika sits for the Chuda rasam. Preeta instructs her to close eyes and not see the bangles till her marriage. Karan and Rishabh assist Mahesh in fulfilling the rituals. Kritika tells that Mahesh means a lot to her.

She sheds tears of joy. Rishabh asks her to save her tears for her bidaai. Prithvi proudly gets decked up for his wedding. He congratulates himself. He tells that he is going to marry Kritika, he will become super rich after marrying her, nobody could attack or demean him. He has made his image clean. He becomes a hero for the family after saving Sherlyn’s life and kicking out the family’s enemy Mahira. He gets a threatening message.

He thinks its Mahira’s message. He takes her message lightly. He doesn’t think she will change, she is really mad. He replies to her that he isn’t scared of her threatening. He is confident that she can never prove that Sherlyn and he are lovers since their college time. The reply goes to Shrishti. She tells that he is so mad at Mahira, but he didn’t think that someone else can send the message to him. She wants to stop his marriage.

She knows that Preeta won’t support her. She tells that she will ruin Prithvi and mark his exit from the Luthra house on his wedding day. Sherlyn feels restless seeing the wedding preparations. She wants to know who is conspiring against Prithvi and her. She suspects Shrishti. She predicts that Shrishti will attempt to stop the wedding. Shrishti meets the family members. Preeta asks her to help her in the arrangements. Sherlyn feels that both Preeta and Shrishti have accepted their defeat, that’s why they are also helping in arrangements. She is scared that something will go wrong in Prithvi’s wedding, even when Mahira has left.

Rishabh tells Sherlyn that she should take some rest, until the wedding rituals begin. Sherlyn doubts on Rishabh seeing his extra goodness. Shrishti tells Rishabh that he is really sweet, she loves him a lot. Rishabh tells her that I love you isn’t a common word to tell everyone, people may misunderstand her. Shrishti tells him that he is really a cool and sweet person. Kareena gets angry seeing Shrishti with Rishabh. Kareena asks Rishabh to go and get Karan. She lectures Shrishti.

She asks her to stay away from emotionally disturbed Rishabh, who just lost his coming baby. She threatens to oust Shrishti. Shrishti defends herself. She gets determined to expose Prithvi, when she finds someone to help. Kareena welcomes Prithvi’s mum home. Prithvi wants to go to the mandap. He meets Sherlyn. He wants her to be happy that he is winning. She shares her strange feeling of the bad omen. He tells that nothing will go wrong with them, nobody can dare to go against them. Sherlyn tells that he should have a misunderstanding in mind, they shall also be alert.

She fears that they can get exposed. He tells that they have taken revenge on Mahira, she is out of sight. He asks her who is giving her tension. She names Shrishti. He tells that Preeta and Shrishti know their truth, but they have lost, they aren’t planning anything at present. He is confident that Preeta can’t do anything. He adds that just Sherlyn can reveal his truth in anger, she loses her mind. Sherlyn gives her word that she will never do anything against him. He asks her not to attempt to kill Preeta again. They find their mothers fighting.

They rush to stop their arguments. Sanjana wants Prithvi to leave from Sherlyn’s life. She is glad that he is marrying Kritika. Prithvi’s mum defends him and reveals that Sherlyn is after him. She wants Sherlyn to get away from his life at once. Sherlyn gets provoked. She tells that she can stop his wedding. Prithvi stops Sherlyn from making a mistake. He asks Sherlyn to remember her promise. She doesn’t want his mum to insult her. She asks him to make his mum apologize to her.

Prithvi asks them not to fight and cause troubles for him. He convinces his mum to apologize. Kareena finds them arguing. She goes to question them about the argument. The episode didn’t bring any revelation as tagged as the biggest twist in the promo. Keep reading for the next update which possibly holds much promising drama. Comment your views below.

Reviewed Rating for Kundali Bhagya 15th July Update Kritika Wedding Shocker: 3/5 This rating is solely based on the opinion of the writer. You may post your own take on the show in the comment section below.