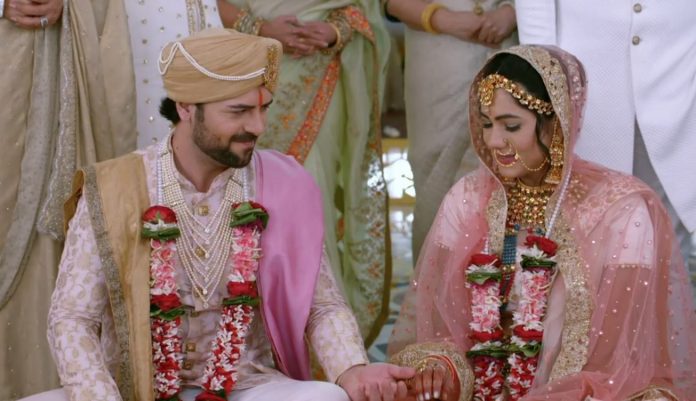 Kundali Bhagya 17th July 2021 Written Update Prithvi wins Mrs. Malhotra stops Mahira from revealing the truth to the family. She hits on Mahira’s head. She tells Mahira that she know the secrets of Prithvi and Sherlyn. She asks Sherlyn to catch Mahira. Sherlyn tells that when Preeta has failed to bring out her truth, then Mahira can’t do anything. Kareena reaches there to throw out Mahira from the house. Mahira asks Kareena to check the recording once. Kareena refuses to listen to her. Mahira asks her to check the recording at least for Kritika’s sake.

Sherlyn asks Kareena not to believe Mahira. Prithvi and Kritika’s marriage rituals begin. The family is happy for them. Mahira reaches there to stop the marriage. She asks the family to listen to her once. Rishabh commands her to leave the house. Mahira tells them that she wants to tell them a big truth of Prithvi and Sherlyn. Karan asks Mahira why is she ruining their happiness. Preeta asks them to hear out Mahira once. Mahira tells them that Prithvi and Sherlyn are playing a big game, they will ruin their family.

She asks Kareena to play the recording, which has Sherlyn’s confession. She tells that even Mrs. Malhotra has confessed about their relationship. Karan and Preeta ask Mahira to play the recording, which makes Prithvi tensed. Mahira asks them to kick out Prithvi and Sherlyn from the house. Shrishti and Sameer meet Dr. Roshni, who had revealed about Prithvi and Sherlyn’s relationship.

Dr. Roshni seems convinced. Mahira plays the audio recording, which gets edited. Mahira fails to prove Sherlyn’s crime. Sherlyn had seen Mahira recording their conversation and stopped it in time. Mahira tells that Sherlyn knew about the recording. Rishabh calls the police to get Mahira out of the house. Mahira asks Kritika to understand the truth, Prithvi loves Sherlyn. Kritika loses her cool. She slaps Mahira when the latter reveals that Sherlyn was carrying Prithvi’s child. Kareena can’t tolerate Mahira.

She asks Sherlyn to throw out Mahira from the house. Mahira gets humiliated. She wants revenge on Sherlyn. Sherlyn declares that the marriage will happen. Shrishti tells Sameer that Dr. Roshni has agreed to help. Prithvi and Kritika proceed with the marriage rounds and vows. Preeta really wanted Mahira to expose Prithvi’s truth. She regrets that Mahira has also failed. She wishes for a miracle to happen that exposes the evil duo. Shrishti calls Janki to know about the marriage status. Janki tells that she is worried for Shrishti’s marriage, since she is pregnant.

Shrishti clears the misunderstanding. Sameer tells that he was mistaken, Shrishti isn’t pregnant. Janki doesn’t understand. Prithvi happily goes to complete the sindoor ritual. Preeta stops him. Bani asks the reason. Sarla tells that Preeta isn’t stopping him. Preeta tells that she had seen Prithvi and Sherlyn together, they shall find out the truth before the marriage completes. She shares her suspicions with the family Shrishti reaches there just in time to stop the marriage.

Dr. Roshni tells them that she knows Prithvi and Sherlyn since their college days, she met them at her hospital where Sherlyn came for the checkup, she had told Prithvi’s name as the baby’s father. The family is hugely shocked by this revelation. Sherlyn asks Dr. Roshni why is she lying, did Mahira pay her to lie. She sheds crocodile tears to fool the family. She tells that she has lost her baby, she doesn’t want to lose her family. She threatens Dr. Roshni by showing a shocking video. Dr. Roshni realizes that Sherlyn has kidnapped her son.

Sherlyn asks her to tell the truth. She exclaims that she is fed up of the blames. Dr. Roshni apologizes to her for the lie. She takes back her words. She tells that Sherlyn didn’t have any affair with Prithvi. She puts the blame on Preeta and Shrishti, who wanted to stop the marriage. Sarla feels heartbroken that her daughters will get blamed again. Prithvi tells that he is feeling sorry for the trouble. Shrishti asks Dr. Roshni why did she lie.

Dr. Roshni replied that she has saved Preeta and her from the danger, Prithvi and Sherlyn are too dangerous, their fate can’t change. Preeta wants to know what’s written in her Kundali Bhagya. Sarla blesses her daughter. She asks Preeta not to invite more sorrow in her life. She wants Preeta to make a new start and welcome happiness. She makes Preeta forget the troubles and smile. Karan and Preeta hug Sarla. Prithvi and Kritika’s marriage doesn’t stop. Prithvi fills sindoor and marries her by completing all the rituals. The family gets happy for them. The couple gets blessed, while Preeta watches hopelessly. Karan and Preeta get together to write a new Bhagya for themselves. Do you like the hyped drama or expect this to happen? Comment your views. Keep reading.

Reviewed Rating for Kundali Bhagya 17th July 2021 Written Update Prithvi wins: 1/5 Hopeless track This rating is solely based on the opinion of the writer. You may post your own take on the show in the comment section below.