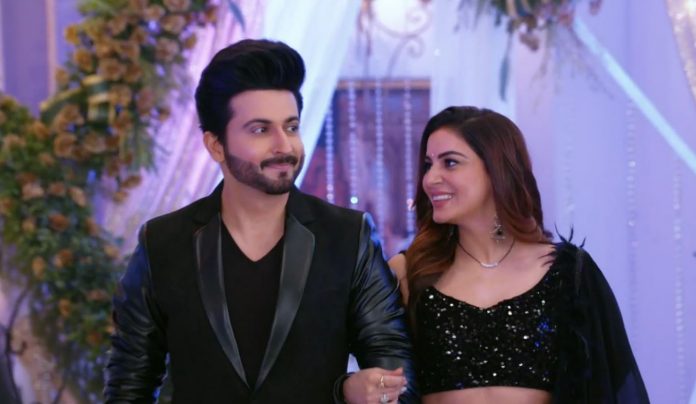 Kundali Bhagya 21st July 2021 Written Update Danger alarm Mahesh tells Karan that he is very happy that he is becoming a grandpa. He hugs Karan. He boasts of his handsome looks in front of Rakhi. Rakhi tells that the coming baby will be really more handsome than him. After everyone finishes complimenting each other, they ask where is Preeta. Karan tells Kareena that Preeta has gone out for some work. She asks him not to let Preeta go anywhere alone. Sherlyn reacts in anger seeing Kareena’s concern for Preeta. Preeta returns home.

Moreover, Preeta wants to know the results at the earliest, since everyone is celebrating. She doesn’t want them to have false hopes. She worries that she can’t go against Kareena. Karan had overheard Kareena and Preeta’s talks. He gets another pregnancy test kit for Preeta. He asks Preeta not to worry about the superstitions. He tells that he wants to be the first person to get the news of his baby. She is afraid that she might be not pregnant.

Consequently, Karan tells that the results don’t matter, as long as they are together, they can get the good news anytime. Shrishti and Sameer compliment each other. Sherlyn vents her anger on Shrishti, seeing her so happy. Janki answers Sherlyn and asks her to mend her ways. She asks Sherlyn to get more jealous of Preeta. Sherlyn accuses Preeta to be the reason for her baby’s loss. Sarla doesn’t want to argue with Sherlyn. She keeps calm even after hearing the blame on Preeta. Shrishti takes Sherlyn away to teach a lesson.

She tells that Sherlyn herself is responsible for the baby’s loss. She knows that Sherlyn tried to kill Preeta and instead fell in her own plan. Sherlyn asks Shrishti how does she know everything. Shrishti tells that her fear is itself revealing the entire truth. Karan asks Preeta to tell him the test results. Preeta keeps silence. He runs to the washroom to check the kit for results. Karan gets glad that she is really expecting. He finds her experiencing mixed emotions. Preeta tells that its positive.

He asks her to be happy that she is pregnant. He declares that they both are pregnant, they both are expecting their first baby. She cries out of joy. She tells that she was really tensed. He asks her to get rid of every tension. She is relieved that the result is confirmed. She wants to celebrate it well. He tells her that she is a doctor, she will start feeling the baby soon. He hugs her. Sherlyn finds them celebrating happily. She feels she isn’t happy, she is still alone when she has Prithvi and Rishabh with her in her life. She wants to be happy like Preeta.

She gets angered seeing Preeta’s smile. Karan praises Preeta’s cuteness. He asks her to get ready. Sherlyn asks them to come soon. Karan and Preeta can’t end their lovely hugs. Rakhi asks Sherlyn if she has called Preeta. Sherlyn tells that Preeta is coming. She feels everybody has got mad that Preeta is going to give the heir to the family. She feels Karan is showering much love on Preeta and hugging her a lot, unlike Rishabh who never hugged her even on the news of her pregnancy. She can’t stand the sight of Preeta getting pampered.

Furthermore, Preeta and Karan arrive in the party. They get blessed by Sarla. The family wants Preeta to give them a little cute girl. Preeta asks Bani about her friends. Rakhi asks Bani to stop taking tension about any little matter. She just wants Preeta to take care. Bani tells that they didn’t invite the guests to keep the good news a secret. They don’t want any evil eye to catch Preeta. Rakhi asks Sherlyn to manage the household duties. She wants Preeta to take rest. Sherlyn loses their attention. She wants Bani, Rakhi and Kareena to love her as before. She speaks to Prithvi to share her frustrating feelings.

He tells her that he always tolerates her scoldings. He asks her not to have misunderstanding. He confesses his love for her. He asks about the birthday party kept for Bani. She replies that its actually a party thrown for Preeta’s good news. He asks her not to get frustrating, the family showered love on her as well when she was pregnant. She compares Preeta with herself.

He tells that they know the truth that the baby wasn’t of Rishabh. She wants to take revenge on Preeta. She tells him that once Preeta’s baby comes, Preeta will become a queen. She wants to kill Preeta. He asks her not to hurt Preeta. He adds that she will land behind bars if she does any crime again. She tells that she can’t let Preeta’s baby inherit the Luthras property.

She cries for her baby’s loss. She accuses Preeta for her loss. She swears to kill Preeta’s baby in the party itself. Prithvi warns her to take any step against Preeta. He shouts on her to stop her. Sherlyn doesn’t listen to her. Prithvi wants to stop Sherlyn’s madness. What will be Sherlyn doing now? Who will stop Sherlyn this time? Will Rishabh come in between and pay a price to save Preeta’s baby? Comment your views and keep reading.

Reviewed Rating for Kundali Bhagya 21st July 2021 Written Update Danger alarm: 4/5 This rating is solely based on the opinion of the writer. You may post your own take on the show in the comment section below.