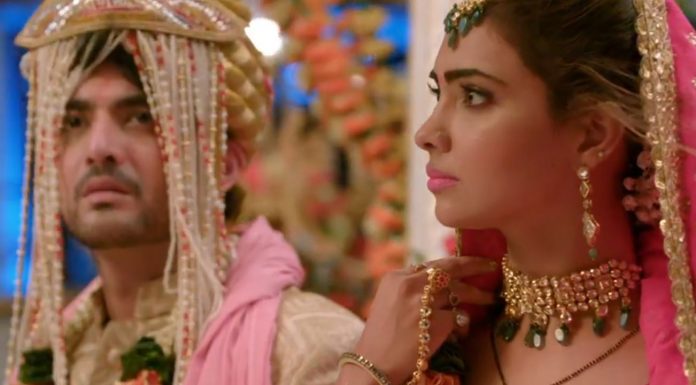 Kumkum Bhagya 22nd July 2021 Written Update Unexpected Siddharth thinks to speak to Ranbir and tell the truth. He calls up Ranbir, who disconnects the call from unknown number. Siddharth and Rhea exchange the garlands. Rhea feels bad for Siddharth, who thinks he is marrying just to save their lives from the dangerous goons. Police arrives there and catches hold of the goons in time. Rhea thinks she never wanted to marry someone else than Ranbir. Siddharth feels the marriage decision is justified.

On the other side, Abhi drinks and walks on the road, getting sighted by Sushma. She gets angered on Abhi. She stops midway to lecture him. Abhi greets her. She asks him not to pretend good. He tells that he is carefree, even if he is poor. She talks of his past. He doesn’t want to talk of his past. He adds that Pragya and he always have fights. She asks him if he would cross his limits. He wants to know what is his mistake. She doesn’t tell him that he has tried to kill Pragya. She asks him not to act good.

He apologizes for the mistakes. She tells that its too late. She warns him to keep himself away from Pragya. He doesn’t think its possible. She exclaims that Pragya isn’t happy with his interference.

She asks him to let Pragya move on in her life. He wants her to be with Pragya. She calls his wish a selfish one for his greed. She tells that he is just benefiting from Pragya’s current status. Siddharth and Rhea get married while saving their lives. They are declared as husband and wife. The groom and the bride arrive there. Everybody realizes that the actual couple is not in the mandap. Siddharth and Rhea’s veils get off. They come in front of Ranbir and Prachi. Ranbir is disheartened to find Rhea with Siddharth.

He didn’t know that Siddharth would marry Rhea all of a sudden by falling for her. Prachi is equally upset by the marriage, but tells Ranbir that they can’t ruin Siddharth’s happiness. Rhea marks an entry in the Kohli house. She urges Pallavi to accept Prachi and let Ranbir and Prachi come home. Is this Rhea’s plan or a real reformation? Keep reading.

Abhi tells Sushma that Pragya and he love each other. She asks him to get his treatment done by a good psychiatrist, she will bear his medical expenses. He is thankful that she took good care of Pragya in the last two years. She tells that she is Pragya’s mother. He tells that he is Pragya’s husband, he has rights on his wife. He tells Sushma that he still regrets for his words. He doesn’t want her to get in between husband and wife. She tells him that Pragya is happy to be away from him, she isn’t his wife now.

She puts some sense in his mind. The bride tells the relatives that she just wanted to help Siddharth and Rhea. Siddharth tells them that the marriage had happened now. Maasi tells him that the marriage happened in an auspicious time, the marrige will surely be successful. Prachi helps Rhea. Siddharth asks Prachi to go with Rhea and help her. Rhea doesn’t want to take her help. Prachi still goes along. Siddharth happily hugs Ranbir. He tells that he will also go and change his clothes. Ranbir is very upset seeing Rhea.

Pragya tries to get the CCTV footage. She calls Gautam, who likes her. She tells that she wants answers from him. She asks him if the property is disputed. She expects to meet him at the office. Gautam doesn’t feel angry on her. He feels attracted towards Pragya. Siddharth tells Ranbir that Ashish and Pooja are really good people, who got him married to Rhea. Ranbir tells Siddharth that he didn’t see Rhea on the video call. Siddharth tells that he doesn’t know if Rhea is perfect or not, but Rhea saved him from the police, Rhea didn’t wish for the marriage, but they mutually decided to get married. He likes Rhea a lot.

He tells that Rhea is just like Prachi. Ranbir tells that Prachi and Rhea are own sisters, they aren’t on good terms now. Siddharth understands that the close relations have fights, like Pallavi and Ranbir also have differences. Siddharth feels the marriage was destined, he got married to Prachi’s sister. Ranbir tells Siddharth that he went against Pallavi and got married to Prachi, Pallavi didn’t accept Prachi and she will not accept Rhea. He is tensed for Siddharth. Siddharth realizes that Pallavi will not forgive him.

Ranbir pacifies Siddharth. Siddharth asks Ranbir to come along and help him face Pallavi. Ranbir refuses to him. Siddharth pleads to him. He believes that Prachi will handle everything. Sushma tells Pragya that she met Abhi on the road, Abhi claimed to keep Pragya happy, he was boasting of his love. She feels that Abhi is really mad. Pragya tells that he is stubborn, he doesn’t understand others.

She wants to sort out the property matters. She assures Sushma that she wil do her bit. Sushma is afraid that Pragya is falling weak. Pragya tells that she is totally fine. Pragya reminisces Abhi’s memories. She really thought that his life can’t run without her, as he always stated. They were inseparable before. She feels impossible has turned possible, that she is able to live without him. She gets tears in her anger. She feels she is so foolish to believe him. She can’t forget that Abhi tried to kill her.

Reviewed Rating for Kumkum Bhagya 22nd July 2021 Written Update Unexpected: 5/5 This rating is solely based on the opinion of the writer. You may post your own take on the show in the comment section below.