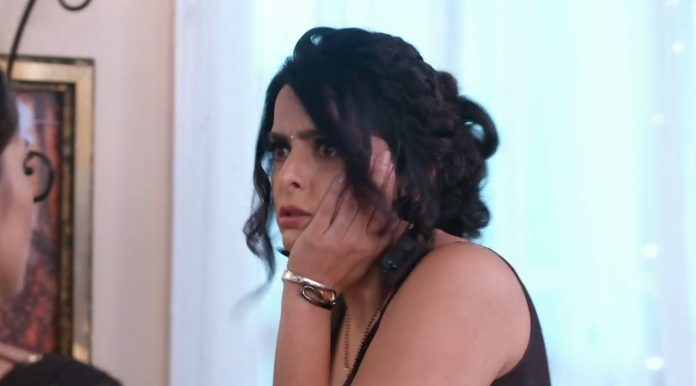 Shrishti is shocked by this revelation. She loses her cool. She tells Kritika that she will kill Sherlyn today. She suffocates Sherlyn. Kritika stops Sherlyn to make any wrong move in anger. She tells Shrishti that Sherlyn has done this out of jealousy, since Sherlyn has also lost her baby. She asks Shrishti to forgive Sherlyn by taking this as her last mistake. Kritika and Shrishti warn Sherlyn against doing anything such to harm Preeta. They don’t want Preeta to lose her happiness. Sherlyn gets mad at Kritika.

She wants to call up Prithvi and tell him how his wife has slapped her today. Sherlyn wants to target Kritika as well. She can’t spare any of her enemies. Prithvi is relieved that Kritika has failed Sherlyn’s move of harming Preeta. On the other hand, Luthras celebrate the double happiness by the good news of Karan and Preeta’s twins.

They happily sing and dance, showering lots of blessings on Karan and Preeta. Karan is thankful to Preeta for giving his family so much happiness by her decision. Karan and Preeta enjoy the moment and feel blessed. Sarla wishes Preeta doesn’t catch any bad sight. She is relieved that Mahira is gone, but wants Preeta to stay alert of Sherlyn. Shrishti doesn’t spoil the fun by revealing Sherlyn’s crime. She feels Karan and Preeta deserve to live happy, away from the conspiracies of their enemies. How will Shrishti protect Preeta? Who will she alert? What will Sherlyn do next? Keep reading.

Daima breaks the good news of the twins. Shrishti asks Daima how does he know it so surely. Daima tells that its the magic of her experience. Mahesh tells that he has ordered a cot for the baby. He wants to order a special cot for the twins. Daima gives Bani all her wishes to welcome the twins home. Bani cuts her birthday cake and celebrates with the family. Karan and Preeta also cut a cake for their good news. Mahesh gets into happy mood. He performs for the family. He blesses Karan and Preeta.

The family is very happy to be welcoming Karan and Preeta’s twins. Karan hugs Preeta with much love. Sherlyn fails to tolerate the sight of Preeta’s glowing happiness, and the entire family rejoicing on the good news. Sherlyn doesn’t want to lose in her attempts to harm Preeta. She takes the marbles once again and goes to keep the marbles on the staircase once again. She thinks Preeta will surely fall down this time. Kritika catches Sherlyn red-handed. She feels Prithvi was right about Sherlyn’s disturbed state.

She tells Sherlyn that Prithvi had called her and informed her about such evil plans beforehand. She takes Sherlyn with her. Shrishti thinks Kritika has learnt Sherlyn and Prithvi’s affair. She finds Kritika slapping Sherlyn. She is shocked by the reason that Kritika slapped Sherlyn to punish her for the crime of harming Preeta’s baby. Shrishti can’t forgive Sherlyn. She tells Kritika that she had picked the marbles some time back as well, she felt someone did this by mistake. Sherlyn gets badly trapped.

She asks Sherlyn if she is stone-hearted to kill a baby in womb. She tells Kritika that they will go to everyone and tell Sherlyn’s truth. Kritika tells that they can’t do this right now, else it will ruin everyone’s happiness. She reveals that Prithvi had called her and warned her about Sherlyn’s jealousy, its in Sherlyn’s nature, they have to think of the elders’ happiness and also forgive Sherlyn for her move in depression. Shrishti asks Kritika to realize that anything could have happened with Preeta, Preeta could have lost her babies, Sherlyn can’t be forgiven if she kills someone in depression. Kritika asks her to think of the family who is celebrating. Sherlyn takes Kritika’s help.

She apologizes to Shrishti and Kritika. She admits that she did a big mistake because of her loss. She promises to love Preeta’s babies. Kritika believes Sherlyn. Shrishti asks Kritika not to believe Sherlyn, who is evil at heart. Kritika tells that they will not spare Sherlyn if she does such a thing again. Shrishti gives a final warning to Sherlyn. Shrishti tells Kritika that she has to go home with Sarla, but she will be stressed for Preeta. She makes Kritika promise that she will look after Preeta. Kritika also warns Sherlyn. Sarla asks Karan to call her if Preeta doesn’t take a good diet. Rakhi assures to Sarla that she will take care of Preeta.

Sarla tells that she has instructed Karan as well. Shrishti tells Sarla that she couldn’t talk with Preeta well. Sarla tells that she will take Preeta home for a few days, then Shrishti can talk to Preeta as much as she wants. Sarla knows that Shrishti can never grow up. Shrishti hugs Preeta and wishes her safety. Kritika messages Prithvi to thank him that he has alerted her in time and saved Preeta’s babies. Prithvi gets glad that Kritika acted smart on time. He tells that Kritika has saved Preeta, he doesn’t care for the babies, but just Preeta, who is also his love.

He wants to get a peaceful sleep now that his Preeta ji is safe. He receives Sherlyn’s call that ruins his sleep. Sherlyn doesn’t want to spare him. He knows that she will make his ears bleed if he answers the call. She sends him a threatening message. He ignores her. Karan and Preeta get glad seeing the baby cot and play with it. Karan wishes that he could also sleep with the baby in the sleep. They practice to take care of the baby. He wants the babies to be like him, fast and furious.

She tells that the babies will learn everything in a slow and interesting manner. She asks Karan not to argue with her, else she will complain to Rakhi. Karan asks her if she loves the babies more than him. She calls him jealous. She tells him that she will just love the babies. He agrees to share her love with the babies. She asks him to learn to take care of the babies. They share a cute moment while they look forward to become good parents.

Reviewed Rating for Kundali Bhagya 23rd July 2021 Written Update Sherlyn caught: 5/5 This rating is solely based on the opinion of the writer. You may post your own take on the show in the comment section below.