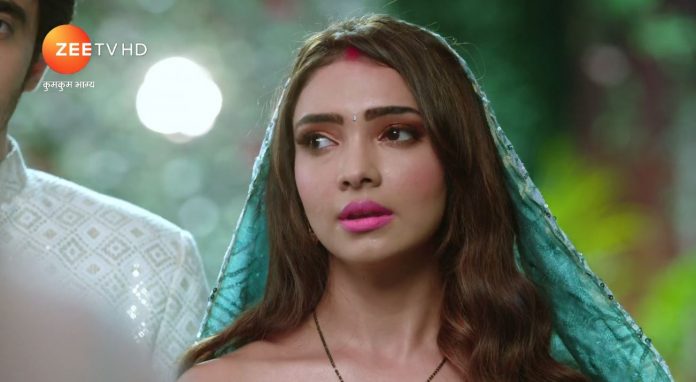 Kumkum Bhagya 24th July 2021 Written Update Rhea’s story Pallavi decides to not forgive Prachi, who is just the reason for Ranbir parting away with the family. She finds Prachi’s attempt really good. She finds her intentions wrong. She wants Prachi to leave the house. Ranbir asks Pallavi to stop humiliating Prachi. He tells that he had brought Prachi with him for Siddharth’s sake. He tells that Pallavi has decided to not listen to them. He apologizes to Prachi and defends her, which upsets Pallavi even more. Pallavi feels he has changed after marriage. He tells her that she has changed because Prachi isn’t of her choice. He asks Pallavi why is she not forgiving him, when she loves him so much.

He tells Pallavi that he had forced Prachi to marry her by threatening of dying. He feels Prachi valued his life and agreed to his wish. He clears out that he has come to help Siddharth. Pallavi realizes that Ranbir and Prachi are playing a big game, they got Siddharth married with the girl she didn’t approve. She feels they have brainwashed Siddharth and made him selfish. She accuses Ranbir and Prachi for taking revenge on them. Siddharth tells that she is wrong. Pallavi refuses to accept his wife. She asks him to leave her house and also take Ranbir and Prachi along.

Rhea finally speaks up to stop Pallavi. She unveils herself and shows her face which leaves Pallavi shocked. Pallavi asks Rhea if Siddharth has married her. Rhea tells that she isn’t able to forget the past, like everyone else. She knows that the past was hurtful, but the truth won’t change, that Siddharth has married her. Pallavi refuses to accept her. Siddharth tells that he knows Pallavi is upset that he has married Prachi’s sister. Pallavi asks him if he doesn’t know about Ranbir’s marriage twist.

Rhea asks her to let bygones be bygones. She tells that she wants to focus on her marital life and not think of the past. Rhea and Siddharth think that their marriage was destined. He tells them that he has told everything about his life to Rhea. He gives his commitment to his marriage. Rhea tells that she has also accepted the relation by her heart. She also wants a chance to stay happy. She knows that Pallavi will find her happiness in her children’s smile. She adds that she will accept Pallavi’s decision, be it in Siddharth’s favor or not.

Abhi blesses that Gautam gets a breakup. Abhi tells Amit that he can’t go and reform the entire world. He goes to meet Sumit. Pallavi enquires about the incident. Siddharth tells Pallavi how he met Rhea and they had to eventually marry to get saved from drug dealers and police. He is thankful that Rhea stood by him. He tells Pallavi that it was fate that he had to marry Rhea, when he had no other way to save his life.

Rhea also feels its fate that she got married to Ranbir’s brother to save herself from landing in jail. She tells that its destined that she has got married in the Kohli family. She adds that she has still become Pallavi’s Bahu by marrying Siddharth, when she was thinking to marry Ranbir before. Siddharth learns Ranbir and Rhea’s past.

Elsewhere, Pragya lectures her assistant on finding that she didn’t make Abhi leave the mansion on the auction day, she didn’t take Sushma’s instructions seriously. She doesn’t want to hear any clarification. She tells that Abhi was lying, he is very smart to fool anyone by his words. She feels even she couldn’t understand Abhi, his way to cheat is still the same, he talks sweetly and then gives bitter memories. She wants to find out why Gautam didn’t come to the office till now.

Gautam understands her obsession for that mansion. He asks her the reason for it. He tells that he wants to know her relation with Mehras, if she has some old connection with that mansion. Pragya doesn’t want to tell about Abhi. She makes a mind to not keep the mansion with her, which holds Abhi’s memories. She tells Gautam that she would check the farmhouse and take it instead the mansion. Gautam asks her to give him a chance to rectify his mistake and present the farmhouse property well. She agrees to go to see the farmhouse.

Reviewed Rating for Kumkum Bhagya 24th July 2021 Written Update Rhea’s story: 4/5 This rating is solely based on the opinion of the writer. You may post your own take on the show in the comment section below.