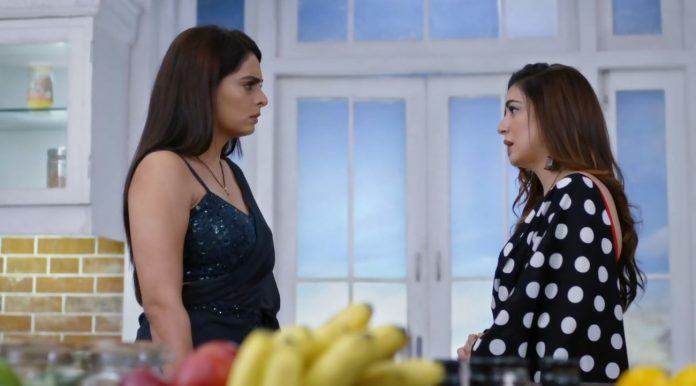 Kundali Bhagya 24th July 2021 Written Update Preeta rage Sherlyn gets hyper on knowing the fact that Prithvi was the one who called Kritika in time and alerted her about the plan against Preeta. She never imagined that Prithvi can go against her. She knows that Prithvi has a soft corner for Preeta and can never see her getting hurt. She regrets that she had shared her real feelings of revenge and anger with Prithvi, who had left her disappointed. She calls him up, but he ignores her calls to save himself from her wrath.

She repeatedly calls him until he answers. She vents her anger on Prithvi just as he expected. She rebukes him for calling Kritika and telling her plans against Preeta. She tells him that she can’t take the double good news of Preeta’s twins, she is determined to kill Preeta’s twins before birth. Prithvi asks her to calm down and not make such a mistake. Sherlyn tells that he has chosen Kritika over her this time and proved that he is Kritika’s husband, who wishes happiness for Preeta and Luthras.

He can’t explain her that he didn’t inform Kritika for the sake of Luthras, but just Preeta. Sherlyn breaks up with Prithvi to punish him for his deceive. She tells that she will not forgive his betrayal, their relationship is over now. She further adds that he will be just Kritika’s husband from now. She tells that he has to respect her as Rishabh’s wife, nothing else. Prithvi struggles to calm down her anger. She doesn’t listen to him. She feels he has failed her.

On the other hand, Preeta learns the shocking truth that Sherlyn had tried to harm her babies. She loses her temper when she sees Sherlyn pretending in front of her. She keeps the matter to herself and warns Sherlyn against making such an evil attempt again. She asks Sherlyn to think of the dire consequences if she tells the family about her crime. She adds that the family will throw out Sherlyn from the house knowing her crime. Sherlyn acts in front of Preeta to apologize to secure her position in the house, but doesn’t leave her evil intentions of killing her babies. What will Sherlyn do to harm Preeta’s coming babies? Keep reading. Comment your views on the coming twist.

Shrishti calls up Preeta and informs about Sherlyn’s move. She tells that though Sherlyn has apologized, Preeta needs to be careful. She alerts Preeta. Preeta is worried on knowing the conspiracy against her. Shrishti wants her to take care. Karan asks Shrishti to disconnect the call and talk to Preeta later, until he wants to be with Preeta. Karan and Preeta spend good time hoping to be good parents.

Karan wants to give much love to Preeta and their coming babies. He learns the right way to swing the cot. He thanks Preeta for teaching him the new cricket. Preeta wonders how can Sherlyn think of doing such a crime. Mahesh and Bani are happy that babies will be coming soon. Sherlyn doesn’t see Preeta around. She thinks to lie to the elders that she has made all the breakfast for the family. She wants to take credit for the work. She tells that she wants to look after Preeta.

She takes the juice drinks for Bani. Preeta arrives there and asks Bani not to have the juice which contains much sugar. She covers up Sherlyn’s lie to have family peace. She doesn’t want anyone to know Sherlyn’s truth. Karan hurries to have breakfast and rush for his practice. Sherlyn wonders why did Preeta lie and save her. A new girl enters Preeta and Karan’s world. She throws a ball at Karan, which Preeta catches in time. Karan doesn’t recognize the girl. The girl tells them that she has come just to meet Karan.

Karan teases her. Their friendship soon gets realized by Preeta. Karan introduces his college friend Sonakshi aka Sona to the family. Kritika happens to be Sona’s friend as well. Sona brings happiness in the family. Karan tells them about Sona’s tomboy look in the past. Sona tells that Karan was always interested in her. Karan asks her not to joke such in front of Preeta. Sona clears the misunderstanding. She tells that she is just Karan’s good friend. She reveals his secrets.

Sona tells that Preeta has a right to know everything about her husband. Bani and Kritika ask Sona not to pull Karan’s leg. Karan defends that he is a sincere guy since always. Sona tells about Karan’s attitude. Sona finds Preeta and Karan’s relationship sweet. Preeta tells that she knows that Karan was a big flirt, she had also seen some of his girlfriends, but he has changed now, he has become a big-hearted and loving husband now. She praises Karan. Sona likes super cool Preeta. Rakhi and Kareena also meet Sona and like her new look. They introduce Sherlyn as Rishabh’s wife.

Sona tells that she is really happy to meet Preeta. Sherlyn wants some attention. She feels bored seeing Preeta winning praise again. Sona invites the Luthras in her wedding. The family congratulates her. Karan tells that he is handling the business in Rishabh’s absence, he has to look after Preeta and family as well. He tells that its not possible to attend the wedding in Lonavla. Sona tells that she won’t get married if Luthras don’t come. She hopes that Rakhi does her mother’s part in her marriage. She sees her family in Luthras.

She doesn’t want to see the family hurt. She tells that the family is also of Sherlyn, they love Sherlyn as well, Sherlyn should respect their love and forget the past. She appeals that they forget their fights, their differences and issues to make a new start. She asks Sherlyn to join her hand and be her friend. She tells that they can together take care of the Luthra family. She asks Sherlyn to know that the family will hate her knowing her truth. What will Sherlyn choose now, peace or revenge? Keep reading.

Reviewed Rating for Kundali Bhagya 24th July 2021 Written Update Preeta rage: 4/5 This rating is solely based on the opinion of the writer. You may post your own take on the show in the comment section below.