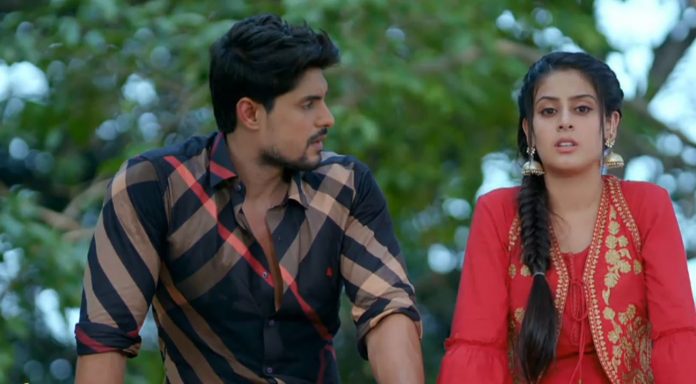 Udaariyaan 30th July 2021 Written Update Jasmin disgusting act Tejo really thinks for a moment that Fateh is cheating on her. Her happy expressions changes into tearful ones with the thought that he could be with someone else. She sees someone like Fateh in the trial room with a girl, but the couple turns out to be someone else. She apologizes to the couple. Jasmin shows the shirt for Gippy. Tejo gets tricked by Jasmin once again. She suspects Fateh in that little moment but doesn’t suspect Jasmin a bit. She trusts Jasmin more than she trusts Fateh. But, both of them are stabbing her trust by getting into a disgusting affair.

Tejo’s faith stays intact when she sees someone else. Jasmin lies to her that she was shopping for Gippy, while Fateh goes back in a fear that Tejo may catch him red-handed. He is afraid to get caught, but isn’t afraid to double-time. He pretends to keep Tejo happy, and at the same time, he spends time with Jasmin, starting his lovey-dovey talks on the phone. Fateh and Jasmin stay connected on video calls and messages, keeping Tejo in darkness. Jasmin acts innocent and tells Tejo that she wants to sit in the front seat.

Jasmin pretends to give more importance to Tejo. He tells that Tejo would sit with him, being his wife. Tejo and Fateh share a moment, while he steals glances of Jasmin sitting in the back seat. He passes romantic gestures. Jasmin acts cheap in the car, making him tensed by her touch. He doesn’t want Tejo to see this. Tejo asks Jasmin to check the wedding cards designs. Jasmin asks her to decide it. Fateh and Tejo drop Jasmin home.

Jasmin goes to her room to share more time with Fateh on phone. Fateh gets aloof to be with Jasmin, and lies to the family about his work. Tejo speaks to the family joyfully, showing full faith on Fateh. She adds that Fateh has moved on, he didn’t care for Jasmin and his past today when they met at the mall. She takes it as a good sign. She believes that he is really working hard for the sports academy. She goes to check on Fateh. He romances Jasmin by his poetry. She finds him busy on his phone, but misses to overhear his love confession for Jasmin.

Tejo catches a bug on Fateh’s shirt and saves him. She asks Fateh to speak to her dad. Fateh gets invited by Jasmin’s family for the wedding preparations. Fateh tells that he will get Tejo along. He doesn’t feel any guilt when he cheats Tejo. Tejo is thankful that he keeps everyone happy. She cares for him, and also plans a romantic surprise for him. Rupy asks Swaroop to stop suspecting Jasmin now, since Fateh will never entertain Jasmin’s madness. Jasmin calls Fateh again. Fateh tells her that they have to stop the marriage somehow.

Jasmin also understands the need. Fateh reaches his room only to get a romantic surprise from Tejo, who expects another night filled with love. Fateh turns down her love appeal. He locks himself in the bathroom for some time to avoid her. Tejo waits for him. He acts sleepy, while Tejo initiates a talk. She tells him that they will focus on their marriage. Tejo lets him sleep, and gives him time, by respecting his feelings. Fateh feels he made a big mistake before. Jasmin gets nervous when Gippy comes home and asks her for the passport.

She has already burnt the passport in order to prove her love for Fateh. She pretends that she lost the passport. Swaroop understands that Jasmin is lying to them. Gippy asks Jasmin to find the passport once again, else make a new one. Jasmin challenges Swaroop to prove her wrong in front of the family. Jasmin seeks pity from the family. She lies to the family and goes to meet Fateh. She urges Fateh to break her marriage by following her instructions.

He wants to know her plan. How long will Fateh and Jasmin cheat poor Tejo, who got trapped in the loveless marriage because of their idiotic clash? Will Tejo learn their affair and take a decision to leave Fateh? How will Jasmin stop her marriage with Gippy? Keep reading. Leave your comments below if you love this show.

Reviewed Rating for Udaariyaan 30th July 2021 Written Update Jasmin disgusting act: 2/5 This rating is solely based on the opinion of the writer. You may post your own take on the show in the comment section below.