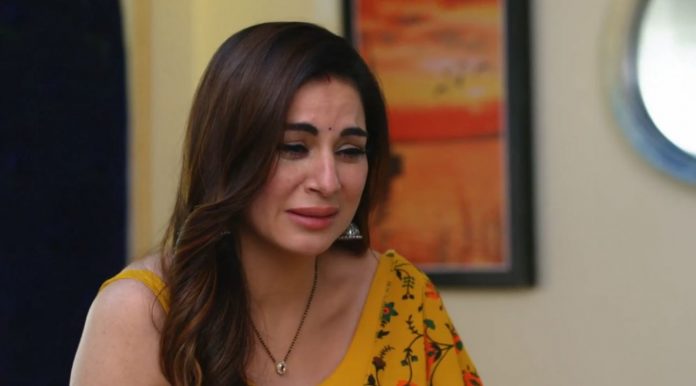 Kundali Bhagya 31st July 2021 Written Update Tearful times Sherlyn suspects that Preeta is hiding something when she sees Preeta crying in the moment when the entire family is smiling. She observes Preeta’s emotional turmoil on seeing someone’s baby. She follows Preeta to know what is she hiding. Preeta feels sad that she is not able to tell anything the truth, she is cheating the family who really love her as their own daughter. She doesn’t think its easy to tell them that she isn’t pregnant, she isn’t bringing the babies into the world.

Sherlyn follows Preeta and learns the huge shocking truth. Sherlyn doesn’t waste time and runs to tell the truth to Kareena. She tells Kareena that Preeta is lying to the family to get their love and attention, she isn’t pregnant. Preeta delays to tell them the truth because of Mahesh, but the truth makes it way out. Kareena is shocked to know that Preeta isn’t pregnant. Preeta cries a lot on losing a big happiness that was seen coming her way, which she deserved a lot in her life, after fighting so many enemies.

She ultimately needed a family to live with, but loses out again. Preeta feels the sorrow is too big for Karan to handle, and keeps it a secret. Kareena decides to verify the truth.

She doesn’t want to spare Preeta, if she is not pregnant and is just playing with the family’s sentiments. Kareena can’t tolerate to see her family, especially Mahesh and Rakhi breaking down because of Preeta’s lie. Will Preeta become a punching bag for the entire Luthra family again? Will Sherlyn be able to prove Preeta’s lie? Is Preeta really targeted by her ill-fate or any old enemy? What could be the truth? Guess the track and comment below.

Karan sings praises of Preeta. He feels lucky to get her in his life. He tells that he wants to be loyal to his wife, just because he loves Preeta a lot. He loves the fact that she changed him completely. Sonakshi is learning to be an ideal wife from Preeta. She asks Rajat to learn from Karan to be a loving husband. Karan tells that he has to go and take care of Preeta. Rajat also makes a leave. Sameer tells Sonakshi that he is feeling really bored. He asks about the lawn. She guides him. She tells that Ananya will take him, Ananya has a crush on him. Sameer wants to avoid Ananya.

She asks Sameer to know that Ananya is really a sweet girl. Sherlyn reaches Kareena to tell the shocking news. Kareena asks what’s the matter. Sherlyn tells that Preeta was crying a lot. Kareena wants to see what’s wrong with Preeta. She is tensed for Preeta. Sherlyn asks her not to go, because Preeta isn’t pregnant. She explains that Preeta was crying all the day, she isn’t pregnant, she has sorrow in her eyes. Kareena doesn’t believe her. She asks Sherlyn if she has lost her mind.

Sherlyn tells that its her experience, Preeta isn’t pregnant. Kareena tells that Daima can’t be never. Sherlyn wishes so, but mentions that Daima is also wrong this time. She promises to prove it to Kareena that Preeta isn’t pregnant. Kareena asks her not to speak nonsense and leave before she gets angry on her. Sherlyn tells that she will come with a proof very soon. Kareena wishes that Preeta stays fine and pregnant as well. She hopes Sherlyn has told a lie.

Meanwhile, Shrishti gets ready to leave for Lonavla for the sake of Preeta. She stays worried for her sister. She calls up Sameer to enquire about Preeta. He tells that Preeta is taking good rest, Sherlyn isn’t with her. He tells that he was going out for some fresh air. She asks him if he is going alone. He tells that he is going with Ananya, Sonakshi’s best friend and manager. She gets jealous knowing about Ananya. Sameer hangs up the call when Ananya comes. Shrishti gets more angry that he didn’t care for her anger.

Janki asks her to go to sleep. She tells Shrishti about a girl who got married to a guy, whom she met at a relative’s wedding. Shrishti gets afraid that Sameer will also marry Ananya and bring her as his bride. She doesn’t want this to happen. She lies to Janki. Later on, Karan meets Preeta and finds her crying. He understands that its her mood swings. He asks her if she is hiding anything from her. He wants her to promise that she will always smile in joy for his sake. Preeta tries to tell him that she isn’t pregnant, but Rajat arrives at the same instant to break their conversation.

Rajat seeks Karan’s help in knowing Sonakshi well. He had a wish to have a perfect love marriage, the desperation for marriage, just like made for each other couples like Karan and Preeta. He asks Karan to help him impress Sonakshi and win her heart. Karan tells that he will talk tomorrow. Rajat insists him to tell him everything about Sonakshi. Preeta feels Rajat is right that they should have love between them before marriage. She wants Karan to help Rajat. Karan keeps her wish and goes with Rajat. Karan tells Rajat about Sonakshi, who was just a tomboy in college.

Mahesh stops Karan from shocking Rajat, and asks if he wants to break Sonakshi’s marriage. He suggests Rajat to take help from Preeta or Shrishti. Rajat decides to call up Shrishti and take her advice. He asks Mahesh for Shrishti’s contact number. Sonakshi wakes up Janki at night. She asks if Sarla can stay alone in the house for few days. Janki tells that Sarla will be much happy to get free from Shrishti and her. She asks Shrishti what’s her plan. Shrishti confuses her with the dragging meaningless talks. Preeta stays in her sorrow. Rakhi’s hopes and expectations make Preeta more stressed.

Reviewed Rating for Kundali Bhagya 31st July 2021 Written Update Tearful times: 2/5 This rating is solely based on the opinion of the writer. You may post your own take on the show in the comment section below.